Advertise your car for sale here. No parts or eBay spots in here please.
Messages: 9 • Page 1 of 1

Also known as the red shell. For those who care why, I'll tap up my blog in a bit. But for now, the details:

Body - paintwork faded, but I'm confident a good portion of it will polish up. Front wing has a ding and front and rear bumpers have minor grazes on which could do with repairing. In terms of rust, the shell is overall pretty bloody good to be fair. There is one area which does need more involved attention though, which is the offside A-pillar. The windscreen needs to come out, repairs need to be made around the aperture and to the A-pillar lower section itself. It all wants cutting back and rebuilding. None of it is an MOT failure, but you would want to sort it. Otherwise it's complete with all original 16v running gear and a set of correct ph2 16v wheels which can be supplied with legal tyres ready to rock. All hydraulics are present but can't be sure on condition as obviously I've not had it running. Front subframe pretty good.

Engine/powertrain - car was purchased with no engine. I have a D6C engine from another G red 16v which is complete and can be used in this car. It's got the starter, alternator, injection gear, HP pump etc....everything, apart from the odd hose or clip (were missing on the car it was removed from!) It could do with the tappets refurbing, and in the best case a de-coke, new valve seals and setting up correctly. It is, currently however, still a runner. Rolling roaded at 145bhp (most 16vs stick out around 155bhp, but I suspect the fuelling was out). Also has a good 16v gearbox fitted with a recent clutch.

Overall - I'm basically selling everything you'd need to put it back on the road. It's not for dreamers - there's a fair bit of work involved, so I would suggest it would suit somebody whose into the 16v for the long-haul and plans a rolling resto/hospital job. However, these are rare cars and in some cases, buying one in bits and putting it together yourself might be wise, as you'll know the car much more intimately than just paying more for a working one and finding out the hard way it's a dog.

Price - I want £700 for it all. Might sound steep initially, but there's a reason why, and I feel I should explain briefly; basically, I could break this car myself, keep lots of useful spares, make a few quid on the remaining ones and call it a day. But I don't want to. I want to see it back on the road. If I were to sell it cheap, there's less to stop someone just buying it to break it instead, and if someone's going to break it I'm damned if it's not going to be me that benefits from the spares & money, seeing as rescued it and have stored it since last year. If someone does buy it, and still decides to break it, I haven't lost out financially, and they've paid through the nose to do so.
To those who genuinely do want the car and want to rescue it, £700 wouldn't get you a brilliant ph2 anyway (certainly not one with an MoT) and the amount of work you may need to carry out might not be much shorter than buying one were the work is already outlined. 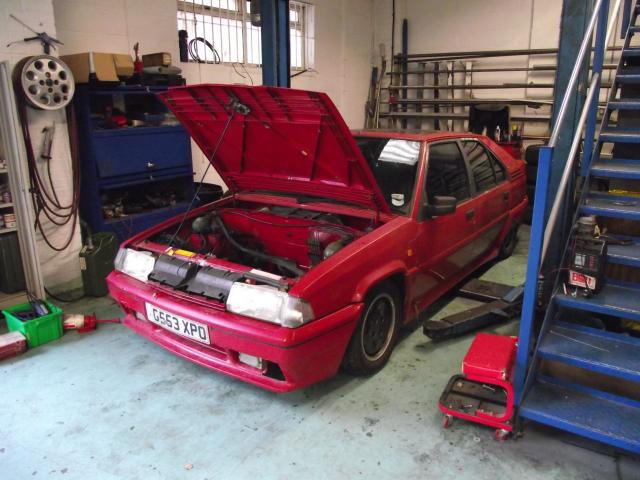 Also included in the price is delivery, by trailer, to the following counties:

So there we have it. Potentially, a mint red ph2 16v. All it needs is your elbow grease and time!
CCC BX monthly column writer bloke thingy - bx@citroencarclub.org.uk

The 'history' of the Red Shell can be found here

And a picture post pugging, before Kitch started to clean it up!

Frankly at the moment it seems like a bit of a bargain mate. Shame i'm not in the market.

Probably too much work for most of us Kitch.
Lots of Motors, mostly semi broken....
Top

Probably you want the space, but if you kept it for another few years, until the scarcity and price went up, you might have a keen taker...
..but I suspect the price might put some off, due to having to do all the work as well.

If I was to buy another valver today it would be with an eye to the future, by this I mean it would have to have a traceable history with its original engine etc, which may be one of the reasons it's failed to find a buyer at £700, as even when you have spent 10s of hours of hard work on getting it on the road it's still a Heinz 57 car at the end of the day, it's a real dilemma, do you try and save the car by lowering the price and lose out financially if they break it up anyway

, good luck with the sale I hope it finds a home.
Top

To be fair, the only bit that wouldn't be original to the car would be the engine. There is FSH for the actual car.

Hear what everybody's saying regarding the price. To an extent I agree with you, but if I knocked it right down to find a buyer, my fear is that someone would buy it, do nothing with it and end up breaking it, or even break it straight away. If someone's going to benefit from hard-to-find spares, or even make a few quid off of it, then I'll do it myself.
By pricing it at what I have, I'm trying to take these potential buyers out of the market. If I take everybody out of the market completely, so be it - I'd rather benefit myself than somebody I don't know. Charity starts at home, afterall.

I understand the points though, and don't expect everybody to see it the same way as me.

I should actually point out that price includes delivery by trailer to the counties mentioned. That's at least £100's worth (if not more) already.
CCC BX monthly column writer bloke thingy - bx@citroencarclub.org.uk