Looks as tho the tank will have to come out to tackle more rust, never removed one before, the bolt heads look pretty rusted and the straps aren't much better, any easy way to do it, or tips, there is 2 tanks, right? First it needs it good steam clean up under the o/s/r arch.
90 BX Tzd turbo 294k SORN undergoing major surgery
90 BX Tzd turbo estate 46k awaiting surgery
65 Peugeot Boxer Van the new workhorse
52 Toyota Rav4 180k Bulletproof Jap reliability
Top

Removing tanks is a real pain in the ass. Dirty, boring and time consuming.

First thing - you'll need a pit to do this. Some people with more experience than me say that workshop lift can't be used since rear lift arms block the main fuel tank (in the text fron now on - "big" fuel tank) when put in provided places, can't say if this is true since I didn't use the lift.

1. Remove the horizontal part of rear seat and undo the plastic garnish (those plastic things that hold the carpet in place - hope that's the word) in order to access the 3 bolts in front of the tank that are hidden under the carpet. Remove the rheostat wiring and disconnect the fuel pipes under rear seat.

2. Park the car over the pit, lift it to the highest position. Put the gearbox in 2nd, lift the handbrake. Place something in ahead of front wheels.
3. Remove the spare wheel.
4. If you want to also remove the small fuel tank, I suggest to remove the rear bumper now. It can be done without removing it, but is is easier with the bumper off.
5. Use a crocodile jack (I prefer to use it since it is stable), lift the car and put the rear end on axle stands. Beware when using the jack - you should place it either under the B-pillar or on the provided place under A-pillar since you need place at the rear to put axle stands. Wherever you put it, entire side of the car will be lifted 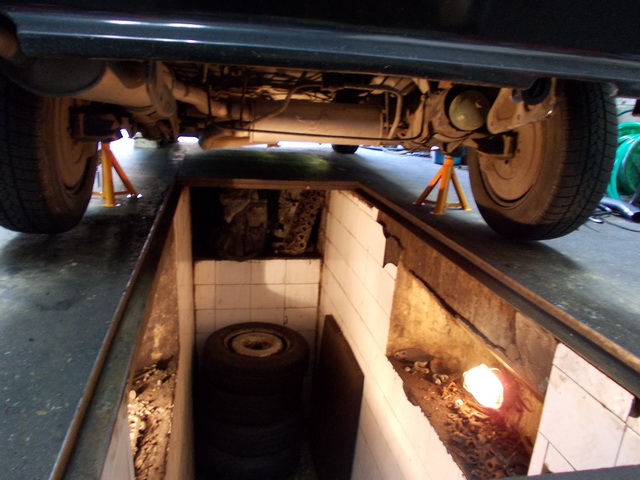 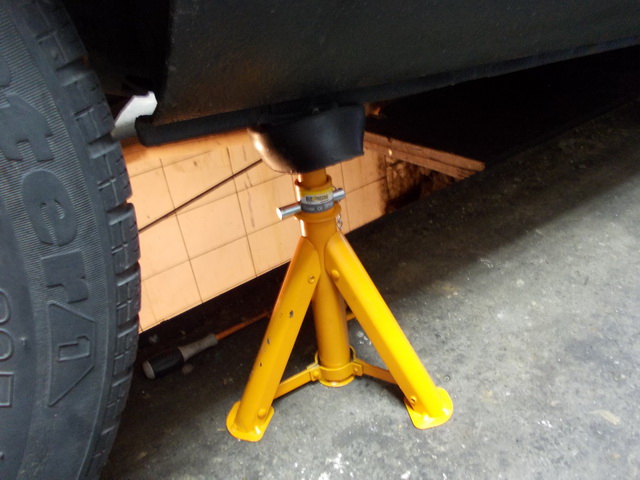 You should lift the car as much as possible, but beware it stays secure on axle stands.

6. Now lower the exhaust system. On 16i BDY, you have 2 rubber holders - one is ahead of spare wheel basket, next to the pipes that enter and exit exhaust silencer, and another one is in the back, holding the rear muffler. It is ideal to remove entire back exhaust system (from main pipe to the back), but it is a real pain in the ass to put it back in place without appearance of farty noises.
Before removing rear holder, I suggest to wrap the rear muffler with elastic rope used for packing and secure it to the car body - it prevents entire exhaust to fall down and cause damage, and you can still move it to keep it out of the way when removing the tank. 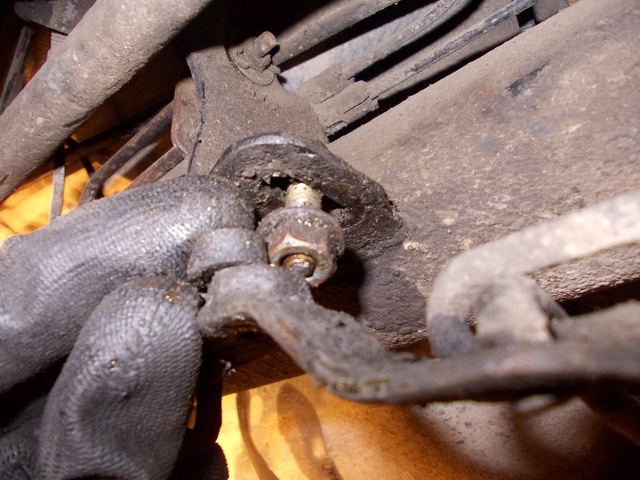 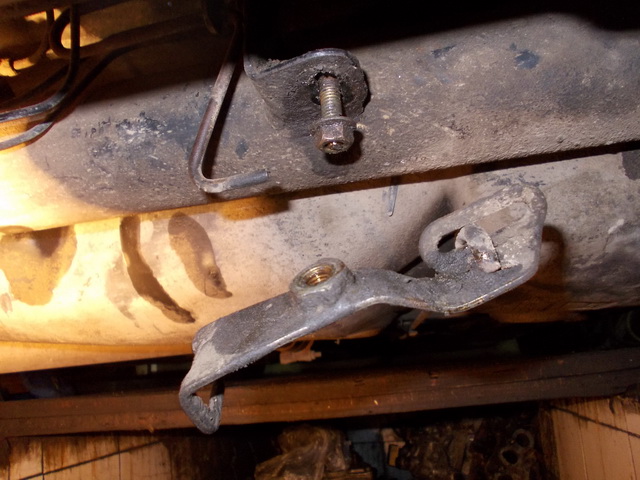 Follow the rod to the middle of the car - you can see a plastic holder in the floor. Use Torx screwdriver to remove the bolt and lower down the rod - no need to disconnect it completely. At least I didn't do it when removed and placed the tank back.

The rear height corrector link can give you some resistance when removing the nut hlding control rod, since the car is in the highest position. When putting everything back in place, you have to reconnect the link exactly as it was. This is the way I did it - I put everything in place approximately as it was when I removed it; lowered the car to driving position, slightened the nut and positioned rear height connector link in the middle of the hatch that can be seen in the picture. 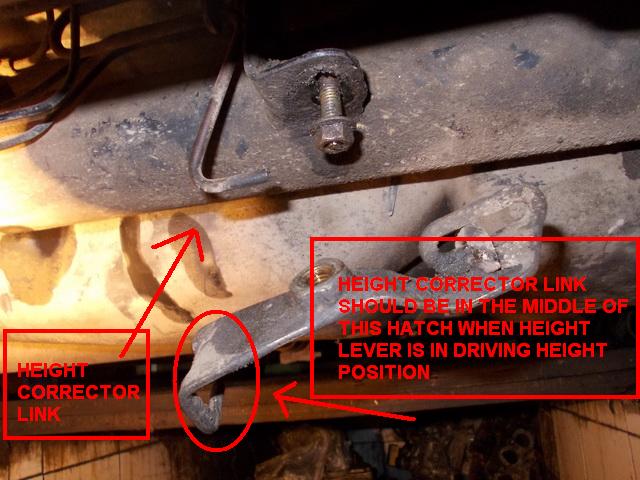 When the car is in driving position, ther should be no resistance between height corrector link and hatch on the rod, and everything should be put in propper place without problem.

6. Now remove the filler hose that goes from small to big tank, on the end that is on the big tank. Use some nylon or plastic bag to close big tank enterance - some remaining fuel can leak right inside your sleeve when you get to maneuvering the tank.

7. Disconnect plastic vent pipe that goes from the big tank back to the small. On my car there were no clouts, so you just need to pull it out.

8. Now get back into the cabin, and undo all 6 bolts that hold the tank (3 under the carpet and 3 under rear seat). When finished, I suggest to take a cup of tea since the tricky part comes in.

10. Watch something on TV to calm your nerves.

11. After this mental preparation, get back to the pit. First you have to lover the front of the tank down and move it twards the front of the car as much as you can, in order to get the big tank filler pipe free - it is the part of the tank and can't be removed. There is no way to describe how to do this, you just need to keep an eye on situation and see what is happening and adjust the position of fuel tank so the filler can get free. When the filler pipe is free, lower entire tank and move it towards left side of the car while manuvering the exhaust pipe - since the tank has the notch diagonally trough where the exhaust pipe goes , you have to get entire tank over the exhaust pipe in order to remove it. I managed to get it off and back on only by pulling it under to the left side of the car. If there is no enough space to pull the tank out under the car, lift the car a bit more with a jack. You'll need a lot of patience and careful manuvering to get it out, but when you do it once next time it will be much easier - it took me about 2 hours just to remove the tank, and only half an hour to put it back. Watch the plastic vent pipe - it is clouted to the top left of the tank, and if it gets in your way just remove it. You'll be able to access it when you lower the tank. If you don't want to mess with it, just monuver it out with the tank.

Small tank is much easier to remove - undo these 3 bolts: 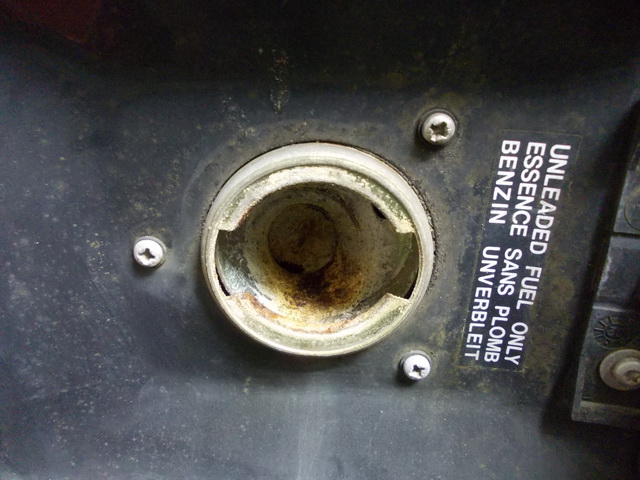 Then get in the pit and remove the nut that holds metal strap and remove the nut on the bottom of the small tank. Use WD-40, and replace the bolts if they are too rusty. Strap can also be made easily, it's common to rust off completely. Get it zinc-plated for protection if you can, it looks fantastic.
If you removed the rear bumper, it's easy to just carefully pull the small tank out after removing strap and bolts. Of course, first thing to do is to remove a hose that goes from the small tank to the big one, and anti-pollution pipe from the filler neck(can be accesed by putting hand above rear wheel when car is in highest position - small, thin pipe), of course if your car has anti-pollution unit. If you remove just small tank without removing the big one and you didn't undo the vent pipe, do it now.

Here I described what I did later with fuel system components:

Pay attention to hydraulic return pipes, there is a Y-joint that leads LHM from rear cylinders back front, and it is likely to brake since in most cases it is 20+ years old. I replaced it with universal plastic joint: 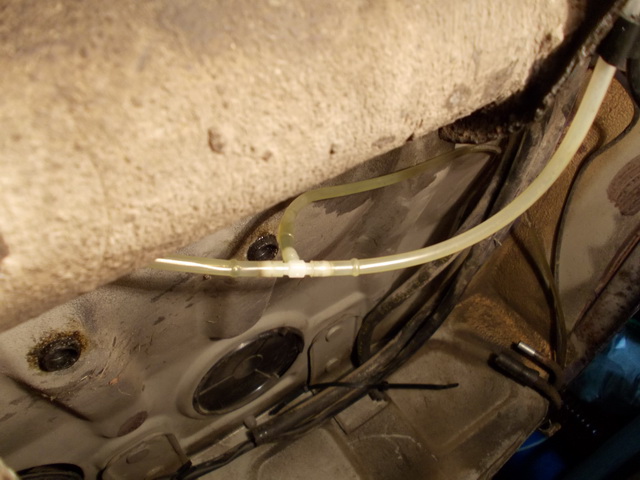 Feel free to ask if you need some more explenation or my English is bad - I'm typing in a rush so mistakes occur often!

That's a great write up. Thanks ++
Top

The other PIA part is the 'threaded' sheet metal screw thread bits, holding the tank. The guy working on my subframe mounts uses a special heater - possibly and induction coil device to help free the screws/bolts from these. Basically they rust onto the thread. I may be putting stainless bolts back in as dissimilar metals etc etc. So you may have to sacrifice the originals, and substitute or replace them.

Fortunately the car was way up a ramp. But also he doesn't mind if you go round looking at it from the underside and checking all the normally hidden areas etc looking for potential problems etc. None of the usual H&S stuff bla bla like you'd get in a lot of places.....

Brilliant write up. There are some things I should mention though; On all the BX's I have looked at have had 5 bolts holding the main fuel tank; not 6. There are 3 along the top & 2 along the front.

I would also suggest on removing the exhaust completely out of the way. The last thing you need is to keep banging your head when your having trouble manoeuvring a awkward fuel tank!

As a extra measure I would suggest syphoning the fuel out of the tank before you start, as that little extra weight can make the job much harder. The best place to syphon from is where the fuel sender unit is & the pipes that screw in to the top of the tank.

David wrote:Brilliant write up. There are some things I should mention though; On all the BX's I have looked at have had 5 bolts holding the main fuel tank; not 6. There are 3 along the top & 2 along the front.

You're right! I remember I had 6 identical bolts when sorted the parts - 5 were for big fuel tank and one for the small one, that's where the mistake came from!

, so removing was to risky as exhaust could end up in pieces. Agree that it's much easier to remove complete exhaust.