I'm hoping someone can point me in the right direction with this. I have a 1986 Mk1 16TRS Auto and for the last 27 or so years the oil level gauge hasn't worked (I know that I have a dipstick and that's what I always use but I think that it's about time that this gauge behaved itself!). I have taken the instrument panel apart and replaced the gauge with the one I bought at the Rally on Saturday but both gauges gave the same readings with an avometer so I guess they are both OK. The sender at the back of the engine gives a reading of 9.7 Ohms at room temperature so it probably is OK and as far as I can test, the wiring I can see checks out. The wiring diagram says that there is an oil level control module in the circuit. Does anyone know where this is located and, if possible supply a part number for it? It seems to be the only bit left to check. This all sounds a tad OCD but I really hate things not working!
Thanks,
Ian
Top

Hi Ian, I was the guy speaking to you (also have a red mk1 TRS). Glad you managed to change the gauge, sorry it didn't sort your problem!

It was nice to meet you and it was a great day (unfortunately we could only manage the Saturday). At least I know how the instrument panel comes apart. I can only think that this elusive control module is the problem as it seems to contain some sort of timer for the gauge to operate. There is a Citroen spares place in Essex and if he has broken BX's in the past, he might know where it is located and might even have a spare.

I'm fairly certain it's part of the electronics onboard the PCB. Mk2 BXs also have the same feature, so you may be able to rob the parts off a MK2, once you've located them

They do have a timer, yes. On the mk2, it only acts as a level gauge for the first few seconds, after which it becomes a pressure gauge.
Last edited by Kitch on Wed Jul 13, 2016 8:54 am, edited 1 time in total.
CCC BX monthly column writer bloke thingy - bx@citroencarclub.org.uk

Kitch wrote:They do have a timer, yes. On the mk1, it only acts as a level gauge for the first few seconds, after which it becomes a pressure gauge.

Same as the Valver.
Mark Smith

On the Mk 1 16TRS the oil level gauge only operates for about 15 seconds at ignition on and then goes back to rest. It isn't an oil pressure gauge. I'm not sure about the Mk1 19GT as the handbook picture shows a round oil level gauge that may also act as a pressure gauge (I think that the Mk 2's may have had this). I've found Technical Bulletin No 7, 31st October 1984 that says that for the year model 1985, when the 171C engine replaced the 171B, an oil level probe and module were fitted. There is a picture of the probe and module but, unfortunately, there is no part number given for either. I've waded through 5 ring binders of bulletins & repair sheets but there is no further mention of either except to show that they exist in the wiring diagrams. At least I know what the module is supposed to look like but still have no idea where it is!
Top

The module plugs on the back of the pcb for the dashboard. It is easily removable when you have the dash binnacle off the car. Its at the left hand end , from memory behind the gauges.
Your oil level sensor may be faulty of course.
The Joy of BX with just one Citroën BX to my name now. Will I sing Bye Bye to my GTI or will it be Till death us do part.
Top

Kitch wrote:They do have a timer, yes. On the mk1, it only acts as a level gauge for the first few seconds, after which it becomes a pressure gauge.

Same as the Valver.

Hi there, looking at my handbook for my MK1 GT, the gauge lights up on switching on the power and gives a reading but drops to the left after a few seconds so it only gives the level on power up. I hope this helps as I first thought there was something wrong with the gauge but after reading up I found that it was the way of the MK1 Citroen.
Top

Aaah, yes thats how they work on all BXs with or without an oil pressure sender. The oil level cannot be reliably measured when it is being sloshed around in the sump while the car is in action.
The Joy of BX with just one Citroën BX to my name now. Will I sing Bye Bye to my GTI or will it be Till death us do part.
Top

It may or may not help you, but the system works by passing a current through the sensor when the key is first turned. This heats up the sensor to a temperature dependant on how much of it is immersed in the oil (if it's in air it will obviously heat up much more quickly). As the resistance of the sensor varies with temperature, the system can measure the oil level from how quickly the resistance changes in a set time period.

I'm still struggling with this oil level indicator. My Mk1 microfiche seems to suggest that the part number is 95 605 092 and the wiring diagram says it has 6 contacts. I've managed to find a new one as in this photo but I can't find out where it is located. It doesn't seem to be under the bonnet and it isn't in the instrument panel. If anyone has had their dashboard out and recognises it, can they please let me know its location? 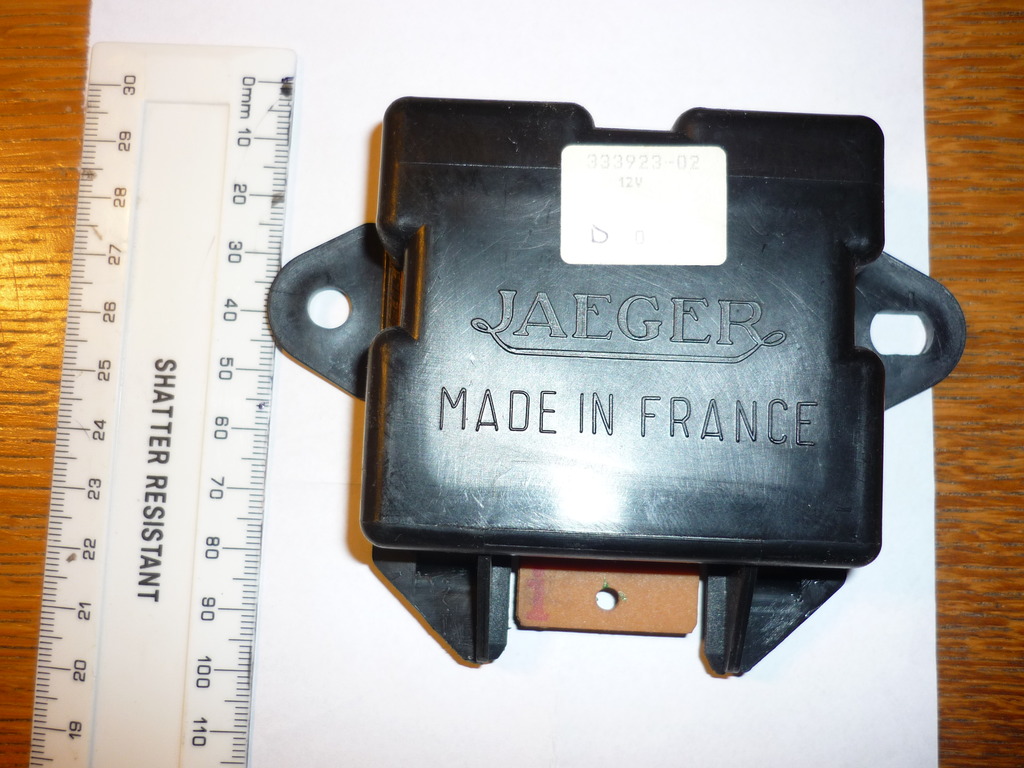 Have you looked under the centre console? There's usually one or two control units buried in there.
CCC BX monthly column writer bloke thingy - bx@citroencarclub.org.uk

Thanks Rich, I'll have a look under there. I'm a bit loathe to pull out too much plastic as I don't know how brittle it will be after all these years and spare trim bits could be tricky to find for a Mk1.
Top
Messages: 19