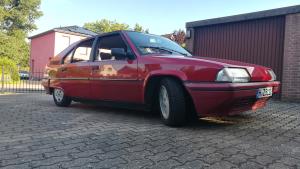 Beside all of the other BX's around here, especially lookin' on Dave's hot black Nightmare... i think i will just put mine in at the end of the row of "Forums Top 600". As stated before, its the complete oppositive of the car i mentioned, its complete exempted from any feature which has a connector or wires that were available for these cars. Its just naked, and for a red car not the red-est, dont mind the bumpers, i will overhaul them in this winter (my car is licensed only from april till september, so a "summer car", rest of the time it sits in its garage and chill his ass out) and maybe try to polish the painted parts, which is no easy job to do on a red acryl-paint-based car...

Some generals: It had run 116ooo kms which isn't that much for 25 years in service, paintjob is "furio red" (Code EKYcS), and has - in the license papers - FOUR preowners. While looking at the vehicle papers it turns out, all of them preowners use the same surename. Uncle bought it, drove it 8 years, brother in for 5 years then, after that grandma was in service and after that a guy from which i got that car. Its funny, because everyone of the preowners had same surename AND same adress. If you want to see it that way, it may not be first hand, but first-family. That worked out for me, especially the car is in a stunning good condition on the inside and used to chill indoors more than standing outside. As you know, its a late 1360 engine, TU3/M with 75 bhp. Its a lovely engine because if you loose your tools out of your hand it will be surely be found on the garage floor, there is much space under the bonnet and you can maintain and repair in effect everything on that engine. Cambelt is changed in 45 minutes with waterpump, and the gearbox goes of in 2 hours, including its drive shafts and all that stuff. Its that easy you could fix it with tape, cableties and some tools right on roadside. At night. In Winter. With windspeed seven and a hurricane above you. Really, its so f*cking easy to operate, and as a mechanic i love that.

In its papers, it is noticed as a total mass of 906kg. But the 90' BX14 of my friend, which has much more extras like powerwindows, rollerblinds, fog lights and so on in it, has same mass in its papers. So i guess - mine should be lighter as stated there. Therefore i also removed the spare tire, the rear window washer container, and some other little stuff like the cold/warm air distributor for a simple hose. I want to make it as lightweight as possible without loosing comfort. In my eyes, nothing makes more fun than a very light car with a rev-joyous engine. With some minor adjustments, you can easily tune that KDY Engine to a very nice power output in upper revs (while accepting that coldstarts are a bit rough then), it all goes in with small adjustments at the ignition coil and the idle-pots. So, atm, it kicks in like a "phantom-turbocharger" at about 4000 revs (lack of rev-gauge) on operating temperature which is just fun to drive. You think about to shift up, and then, little TU in front puts some more in. So much fun to drive. Its not about topspeed (mind that i am saying that as a german), but quickstarts and corner roads handling.

I also decided to fit some "comfort"spheres in it, to soften it a bit on really rough roads (which i have lot of, around me). Turns out that this isn't helpful if you decide to accept a spontanous hill-up-race with another speedhead. Maybe i gonna change them back. Btw, the complete hydraulic system is in a very good condition, and all the badmark places are in good condition yet. That sayed, here in germany, if a car is 30 years old since first registration, it got a special "oldtimer" status. Which means, insurance and taxes are fixed to a given level (which isn't that worthwhile for my little engine BX, but:) plus you get an "H" on the end of your licence plate, because you are driving an "historic" car now. Thats what i am planning to do. I want to make it an Oldtimer. There are some requirements given to get that - very germans. "Car must be in better condition than the most of them are at this time". Yeah, thank you. I'll do my best. So 5 years to go - and giving my best to make this one better.

Additional to say - i had some thoughts what to do and what not, on my car. Some extras like an armrest and yellow fog lights are just needed, in an old french car. Then, there came personal flavour - like some more audio, some lowering (which is pretty easy, hue hue hue) and some accustic tuning exhaust sided. But all in all i want to keep it as original as it will work out. Fyi - i bought the car for 1100 Euros. Without "MOT"; a "worn clutch" and "major ignition failures". Turns out - the worn clutch was just a misadjusted pedal /Clutch cable, the ignition failures were done by installing that missing capacitor (why the hell was it missing?!) and the MOT, the "TÜV", was an easy going, just some minor rust at the typical edges in the bonnet and below the front fender, which is to be done this winter. No more rust. And other things don't broke on a BX14. Hue hue hue.

Anyway, here you go! And thank you for patience. I just wrote that much - in that time you could have fitten valves timing on a TU3.
Cheers! Steve

Nice read Steve, the oldtimer status sounds good at 30 years. I am sure it will be looking ready by then.
Interesting about the comfort spheres, think I will give them a miss when I next buy and stick to standard.
Funny you mention easy to locate tools, my Craftsman screwdriver bit dropped somewhere in the engine. Thought that was the end of it and it was part of a set. I found it on the drive a few yards away days later.
Thanks for the compliment on mine, I think

Hey Dave,
thank you. And yes, compliment was on you - your car is stunning, many respects from me for that one. Great!
Just as you prefer to do, i will pull them out then, too. Was an "experiment" for me, some people love them, the other ones hates them, so i wanted to try them out for myself. I am sure that "crusing-only" drivers will love them, but everybody who drives some corners will be dissappointed...
As to mention, the stock-spheres are good anyway. I think that BX and XM are the last models which ride like a classic Citroën should ride, Xantia's and C5 Series are way stiffer.
To the "tool-locating-ability", i used to had a XMV6 once. Lost a 12mm spinner in it, never found it, until i dissambled the top exhaust heat cover. I don't know how it got there (i was working at the front part), but there it was - with a nice cover of rust.
Cheers, Steve
"You could drive any f*ckn car in the world as a mechanic - why a BX?" - a former friend
Top

Thanks to Cliff, my BX is a bit more "english" now.
I combined my custom cluster (GTi, but instead of rpm-meter with clock) with a speedo from a cluster Cliff sent me. I love it.
I replaced the "mile counter" with my "kilometres counter", which is lovely - i keep my originial "mileage" but the trip is in miles. I think, a cluster - here in germany - couldn't be more custom. Both temperature gauges are working too, thanks to anyone helping. Its much more accurate than i thought - at 90 Degrees coolant the fan starts to blow in and the needle slowly moves backwards to 85. (I retrofitted another blower switch which starts a bit earlier, because the switch is in the BACK of the cooler, not in the front side). Oil temp gauge is working with a 3rd party sender, BOSCH. I am not sure how accurate it works, but normal driving is middle of gauge, like 100 degrees, and after rushing around it can go up to 130, but keeps lowering after calming driving. Compared to my former 206 GTi, that would be halfway accurate. I am pretty happy with both!


Otherwise, i still struggle to get the bumpers painted. I will give it a try with "ovatrol/polytrol", most say its working wonders.
Thing is - they don't have to be painted, because its colored plastic... and i want to keep it that way.

I have that car a half year now, i just use it for cruising/rocking around, i don't need to drive to work with it, since i work in my town and do my way by scooter/bike/foot-if-both-don't-work. So i just put 3,5k kms on it, or 2000 miles. But you can see these cars aging, not compareable to my first BX, 14 years ago. I done some welding in the boot, and many many major and minor adjustments and fixings. As i know, rear axle is coming soon, front axle also, and clutch is on late pedal way, so its near finish too. Since nowadays it got a new exhaust including katalysator, many small parts like complete ignition, switches, spheres, adjustments at the engine and suspension... and more to come. I am fine with that because parts are cheap and i am a mechanic, BX is a hobby for me. But if i would be a normal person, and had to get all jobs done by a garage... i wouldn't have it anymore i guess. Many problems which was never maintained before and some false repairs by further garages. All in all its in a really lovely condition, esp. for a red car with lumberjack-equipment-features, which means nothing, its not worn and its still fun to drive. It still looks good since its dent-free, and there is no shabby corner on it. Many people recognize it more and more, you can really see, BX is getting out of view in germany a while ago. Sometimes got thumbs up while driving or some nice words on a gas station or on supermarket parking lot. Wasn't expecting that.

Anyway, my fellow BX drivers over the channel (

), keep your ladys and boys - they are getting fewer.

Greetings from germany (was a lovely sunny day)!

(i dont know why it keeps fucking up my image links.)
"You could drive any f*ckn car in the world as a mechanic - why a BX?" - a former friend
Top

Can't see your pictures. What is wrong with your bumpers, are they coloured plastic that has faded? If so, look back through my posts and you will pictures/video of restoration with a heat gun on my '85 BX14E.
1987 Volvo 480 ES
2006 Citroen C6 Exclusive 3.0 petrol/LPG

i know about that "heating your bumper with a heatgun" story. Sadly it didn*t last long. So i will try it with this wonder-fluid.
If nothing of this works, it will get its paint.
"You could drive any f*ckn car in the world as a mechanic - why a BX?" - a former friend
Top