Tell us about life with your BX, or indeed life in general!
Messages: 17

I've been around PSA stuff for a while, helping rebuild a Saxo years ago, owning a Talbot Express for many years, I went to the last ICCCR in 2016, but I've never actually owned a Citroen myself. To cut a longer story short, my brother gets into BXs, but because of my involvement with that, he felt bad and bought me one!

It drives really well, mechanically there isn't heaps to do beyond basic servicing and tiding up. However it sat in a field for a very long time and it shows.The interior, everything inside was covered in a layer of mould or stains, and a pretty sizable leak coming in through the front had soaked all the foam insulation, so it stinks pretty bad.

The aim is to tidy it up and get it usable, preserve anything in a way to at least hold rust at bay for a short while, then come back and work through everything in a less bodgy way over time. A sort of rolling restoration I guess. 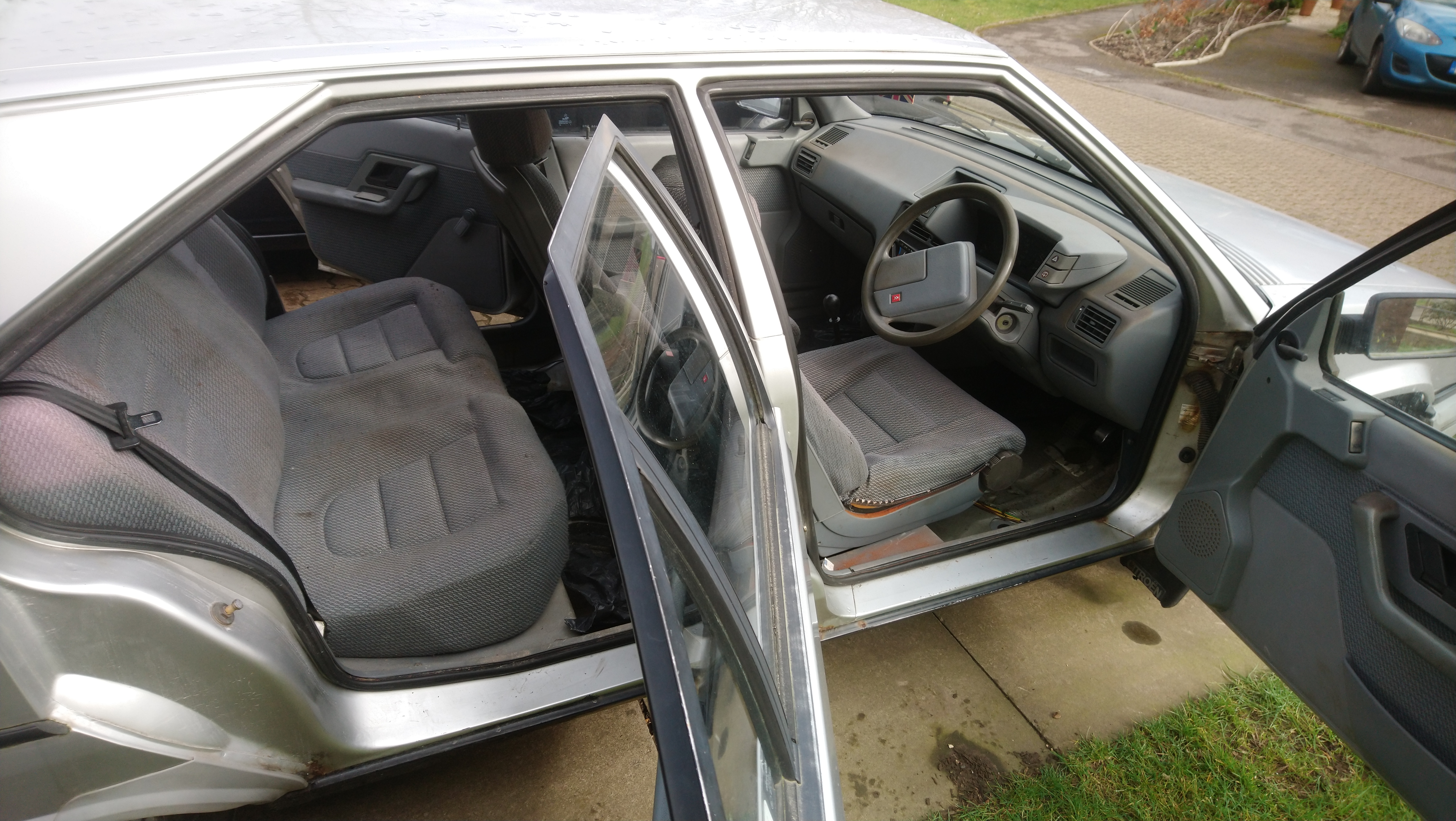 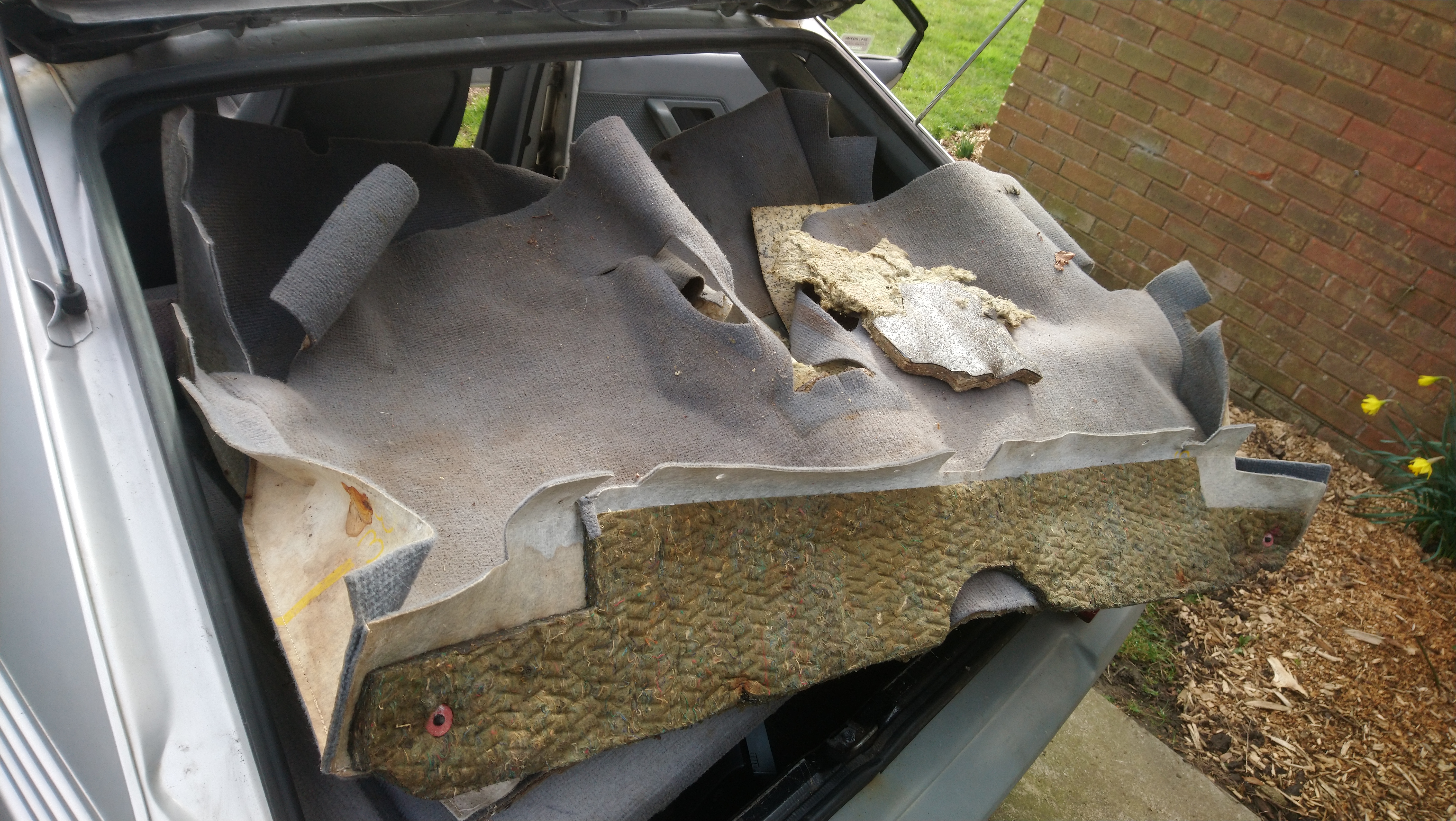 Ick. It completely robs enjoyment from the car when you feel like you're in a 34 year old petri dish. Still, nothing that can't be cleaned up. So the very first thing I did was strip the interior. I got help. 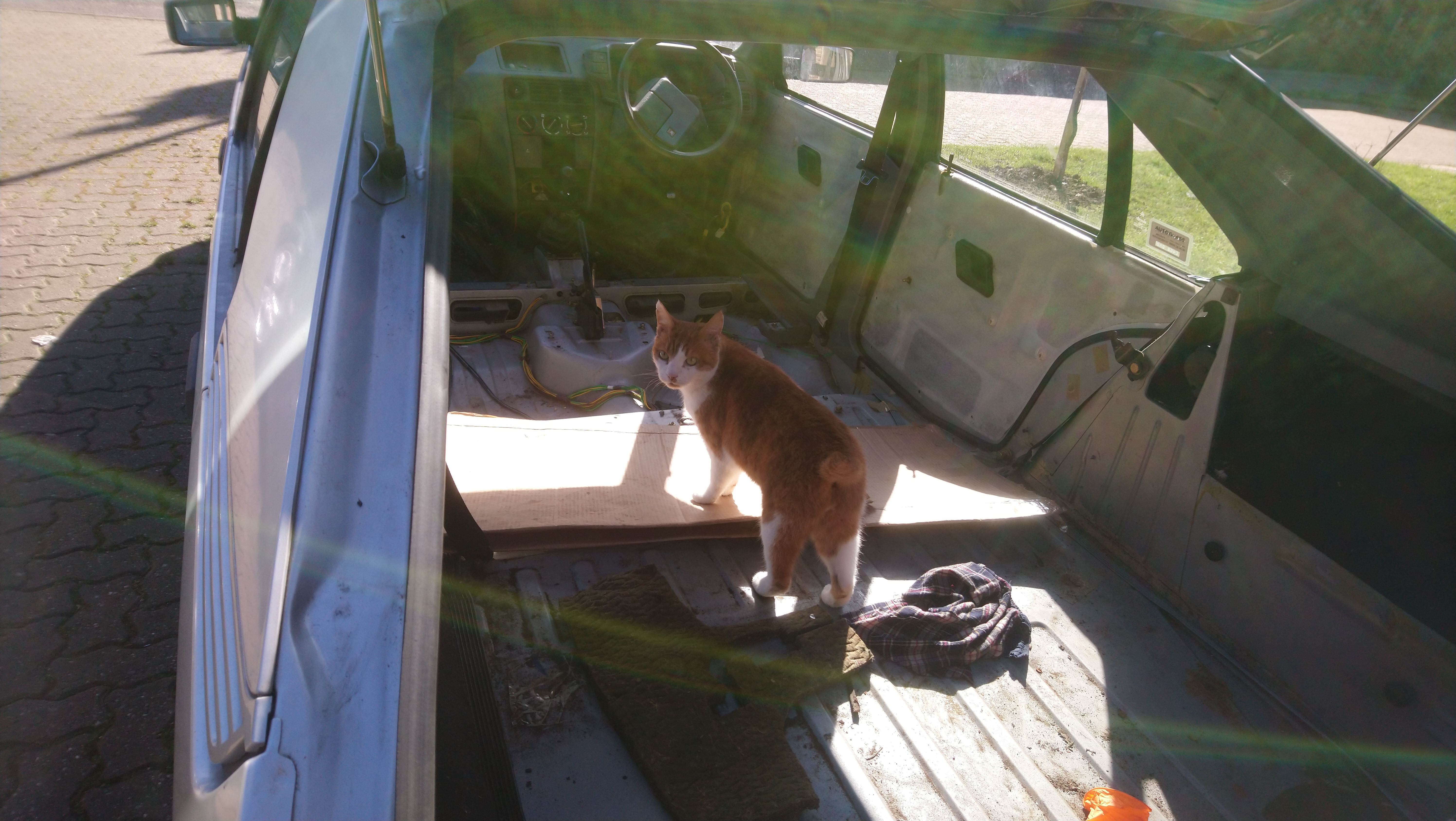 I didn't feel like looking at the leak right away, so the scrubbing marathon began on the trim. Bleach, carpet cleaner, upholstry cleaner, everything got thrown at this. Each door card took me well over an hour. This gunk on top of the beautiful 1980s faux rhino hyde just had to go! 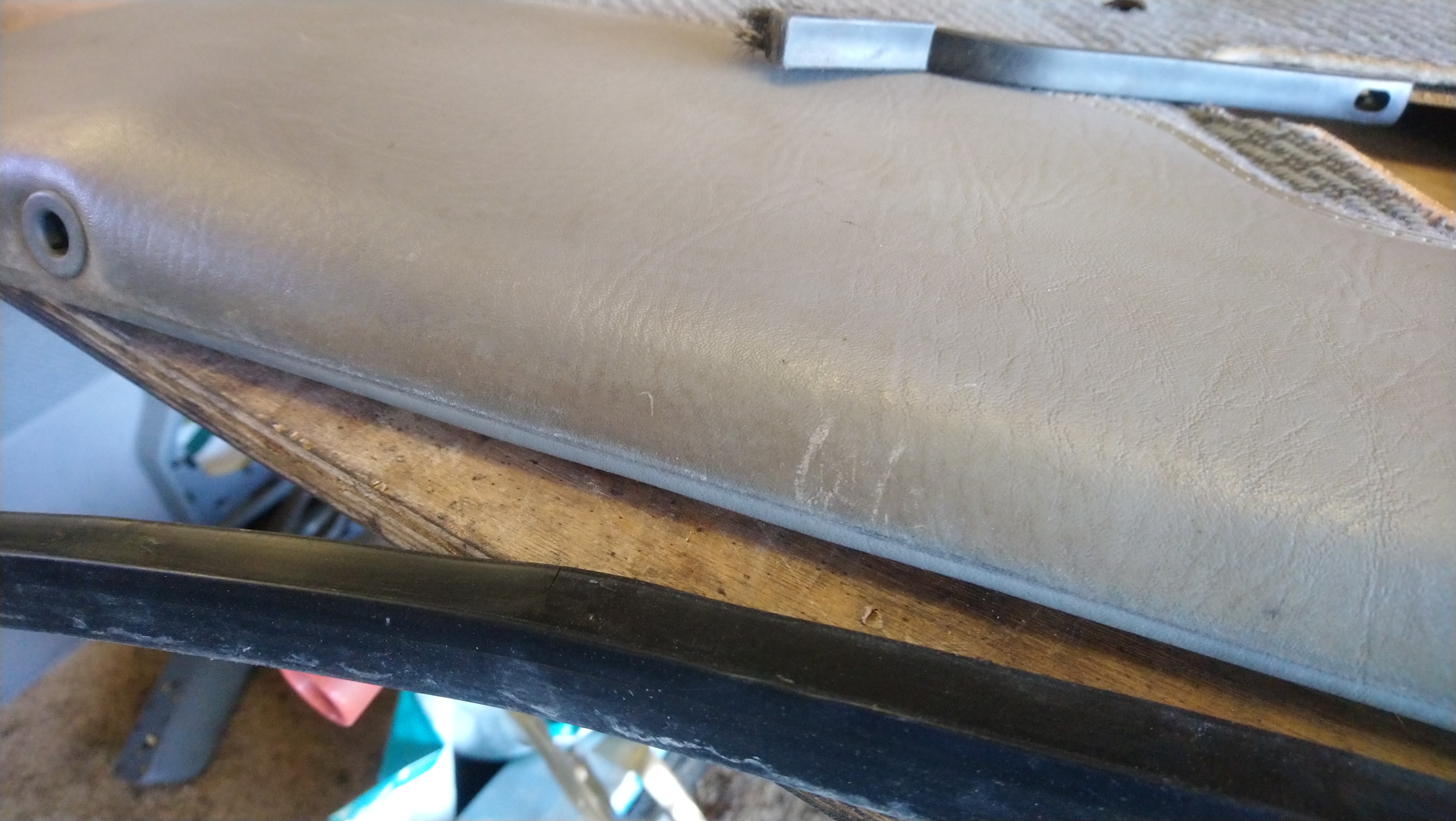 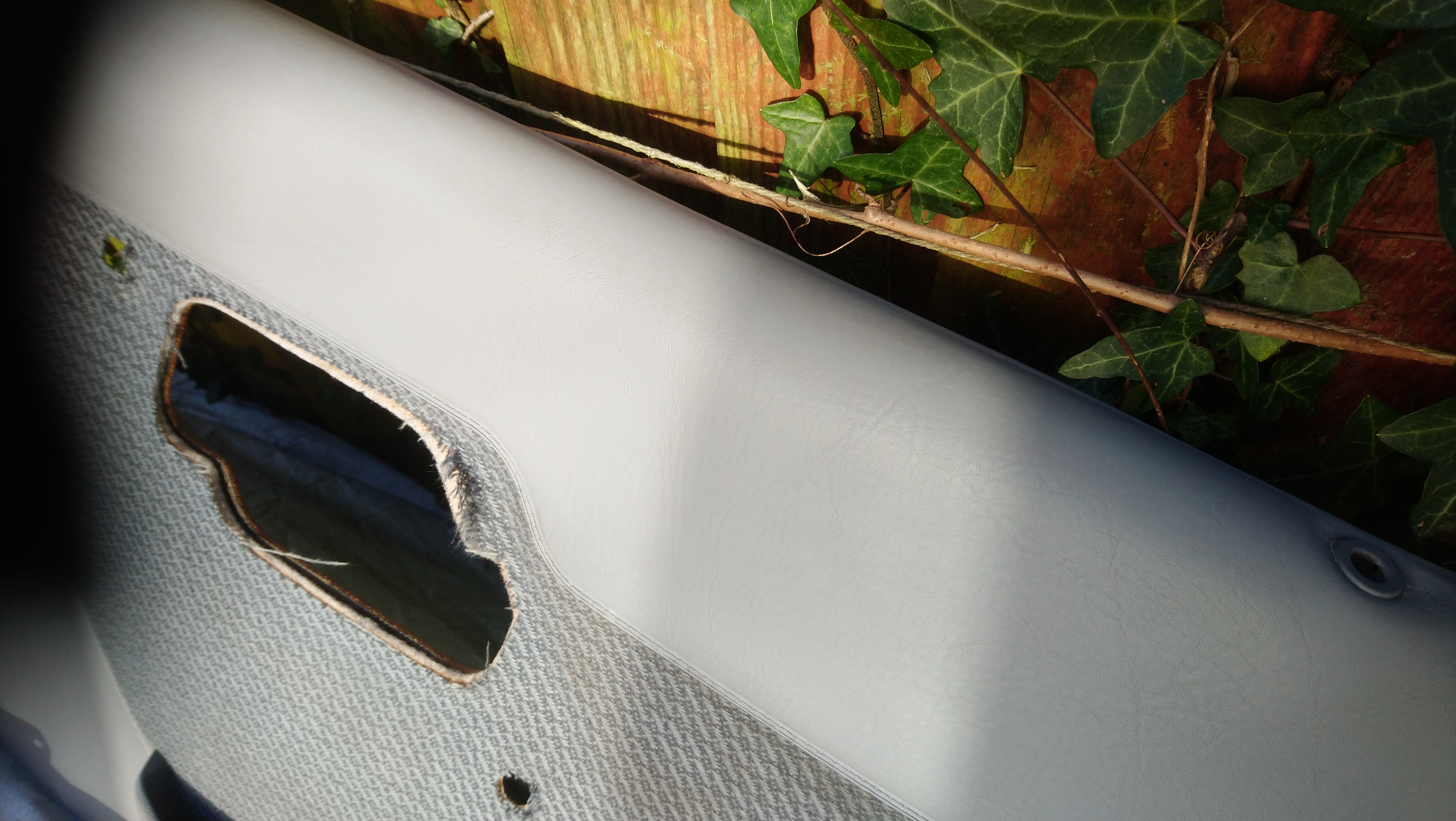 That was yesterday. Today I decided to look at the leak. The heater box has already been resealed so that's not the cause. I ruled out the windscreen because the water was still coming in when I poured it into the scuttle panel well below the window. Hmm. So I decided I might as well cut out all the smelly rotten insulating foam on the inside (since it's useless now anyway) and see where the water is coming in. I quickly found my answer. 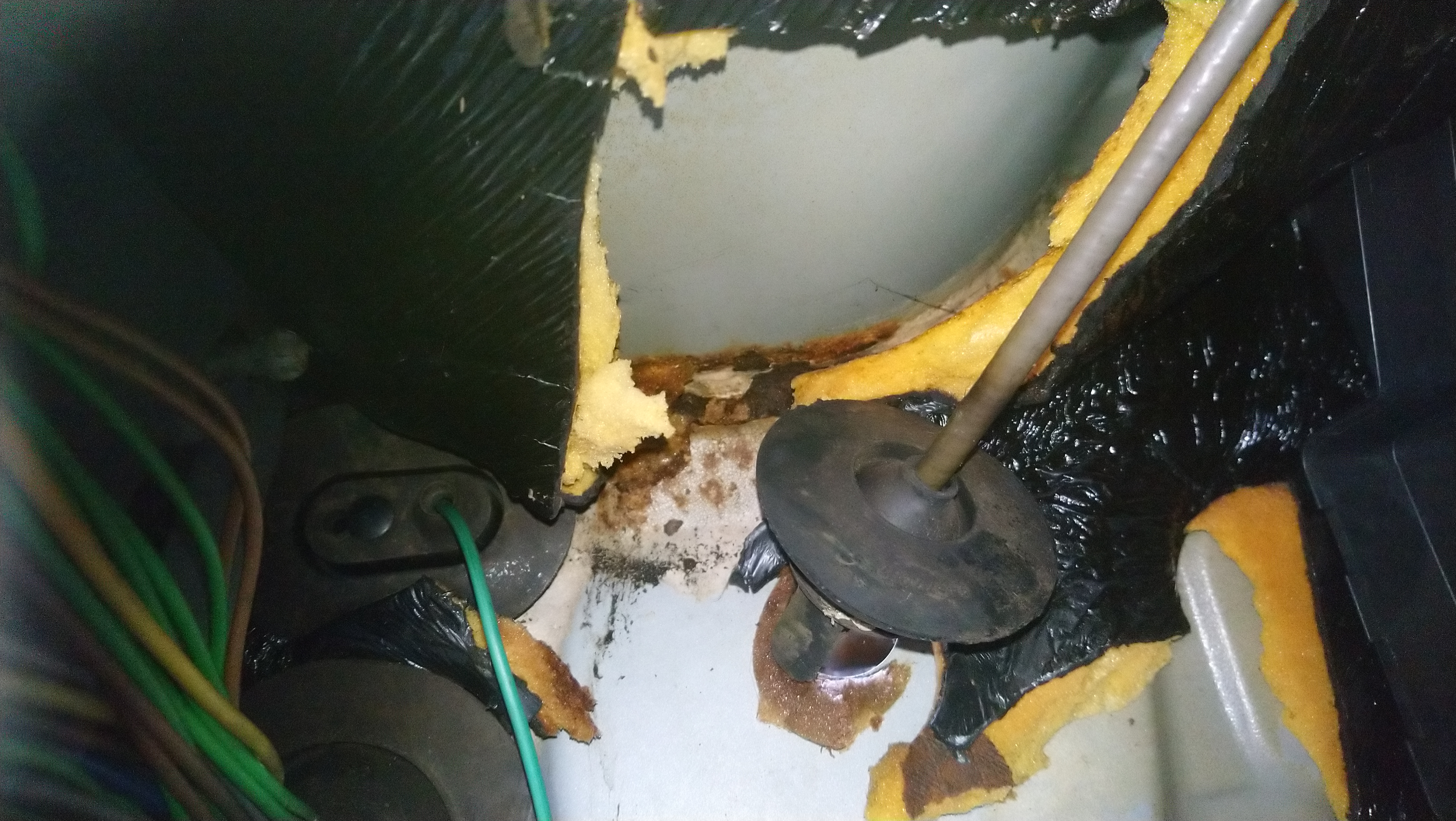 Crap! It's worse than it looks. I can fit four fingers in there! But that's about where the (speedo?) cable goes into the engine bay. Why would so much water be there? Closer investigation of the scuttle and I noticed the sealant at the front edge was perished, but also there were two small holes in the scuttle itself! This must have been letting water into the double skinned area where the panels overlap, with it getting trapped in there and rotting the bulkhead out! 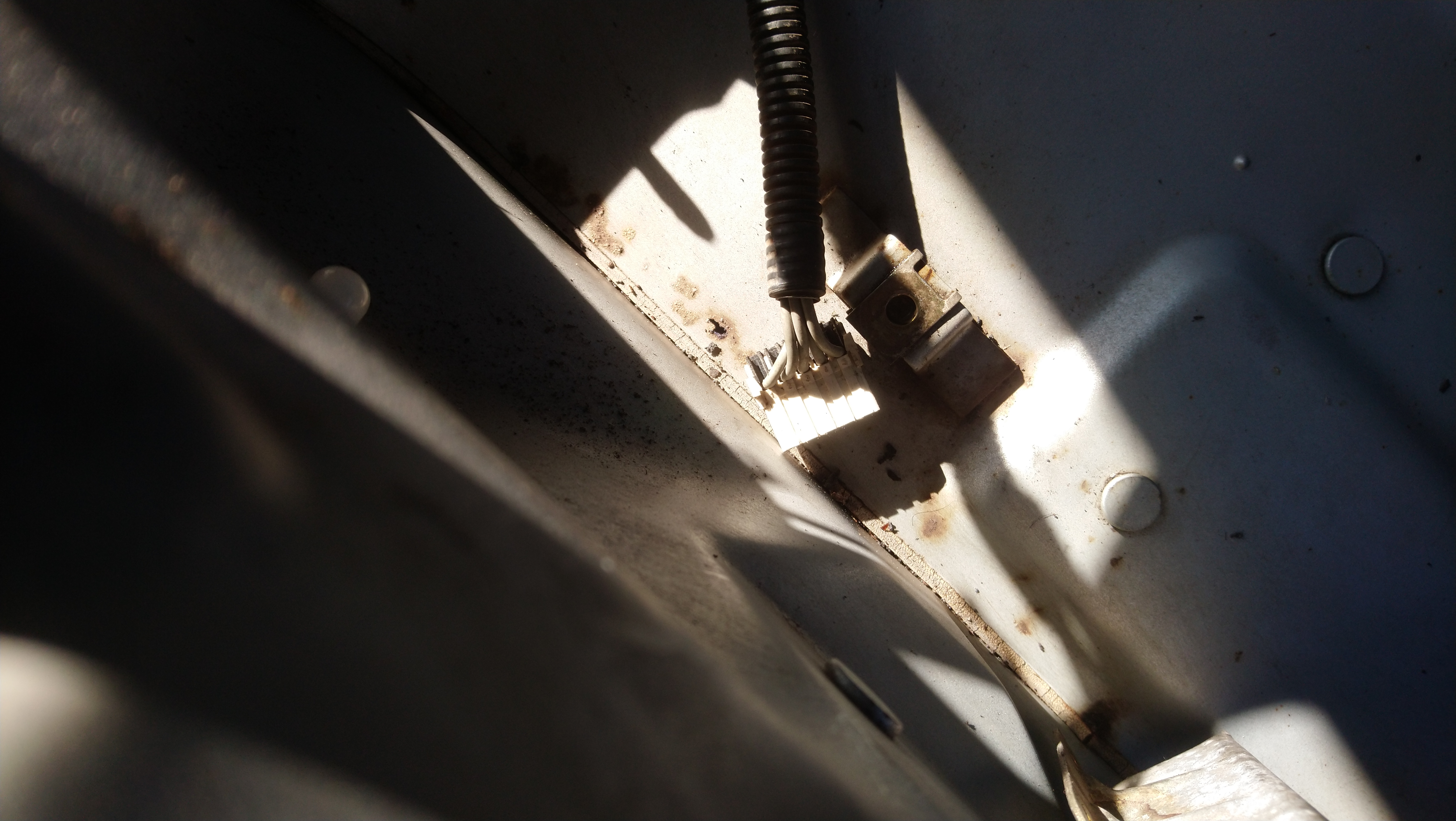 So this has been sealed over, and the big hole rust treated and covered with a plate and some sealant until I can get a welder. I will cut this out and weld it properly later. At least it's behind coverings where it can't be seen for now. Hopefully that should stop the leak. I'm not too happy about what I used to reseal the the heater box, but it's all I had. Shame it had to come out to get to that area. I hope this will seal it, we'll see when it next rains or if I get around to washing it before then.

Tomorrow I'm going to investigate the driver's side for any other potential leak sources. I wouldn't be surprised if it's been leaking in more than one place.
Top

Looks to be in good hands, no messing about!

I did do a double-take on your photo of the door cap 'before', wondering where Citroen has used ½" plywood

. Then realised what it was!

Hope the underside hydraulic pipes have survived being sat in a field, not the best for one of these. Stripping everything out is certainly the best way forward.

PS Your user-name is intriguing

I think it reads Citroen in Japanese

You've got a very generous bro' , I think I follow him on Instagram unless there's two guys around with a BX estate who brought his brother a BX

Found another hole in the bulkhead today. It's been sealed up in a temporary fashion but I'm definately going to be learning welding. Dreading what the underside is going to be like, I haven't looked yet.

Also changed the rocker cover gasket, sorted the really stiff door handles on three of the doors, recovered the clips I dropped down inside those doors, discovered that the passenger window motor is useless and bodged up the door membranes (I seriously hate those things)

Yes, that's what it is.
Top

You come after zowark in the members' list, after the Z's

Well, there's not been a lot of progress on this recently. The interior has gone back in and it's not perfect but cleaner than it was, not completely revolting now. It doesn't seem to have let in any of the rainwater we got since, which is good. I've also replaced the coolant and thermostat.

The LHM leak at the pressure regulator has got a lot worse. Not sure what I'm going to do about that yet.

The last thing I did was jack it up at the back to inspect the subframe mounts and various other bits of rust. They don't seem too bad fortunately. There are many crusty areas that need painting, but I'm not seeing any holes. It still needs a lot of welding at the firewall end though, but at least it doesn't need an unreasonable amount of work at the back.

However the hydraullic pipes are pretty bad in the mid section under the car, and a few areas in the engine bay. Really I need to get some quotes for getting this fixed, I don't have the tools to deal with it. However I'm not sure of anywhere local that knows what they're doing with hydro citroens. Does anyone have any recomendations?
Top

Your best bet is to d.i.y. Learn how to otherwise it can become a money pit, there is nothing too complicated when it comes to changing pipes.
Get yourself a little mig welder as you Will need it time and time again if you have rust issues.
I was once quoted £500 to weld bulkhead this is notorious rust area on bx and can be tricky to repair as the electrics are just underneath it.
90 BX Tzd turbo 294k SORN undergoing major surgery
90 BX Tzd turbo estate 46k awaiting surgery
65 Peugeot Boxer Van the new workhorse
52 Toyota Rav4 180k Bulletproof Jap reliability
Top

Regulator leak might be either the return pipe, or the main O-ring on the regulator.
Clean it up and inspect.
Chris
Top

Cleaned up the area around the LHM leak. It's coming from the FDV, not the regulator. It appears to be the pipe on the bottom left (the one which turns into a hose and runs off through the engine bay to either steering or regulator, but not the return). I tried tightening it but that didn't work. With a bit of luck it just needs a new sleeve. I'll get some on order.

I had to change a front tyre today, fortunately the car came with a brand new spare, made last year. Saves me having to go out.

All the suspension and stuff is pretty crusty on that side, the strut return pipes look pretty bad, but somehow aren't leaking. The struts will get a rebuild later, so I just cleaned them up for now. The brake line was a bit crusty where it's exposed, but cleaned up nicely with a wire brush. Looking around what I could see of the hydraullic pipes in the lower engine bay, it seems most of the complicated sections have had oil leak over them from the engine, sparing them of severe rust. It's the longer flat sections that need replacement. The rest I'm happy to clean and paint up. Hopefully that should simplify the task quite a bit. I've replaced brake pipes once before, but not on a Citroen. The problem is going to be getting the car into the air high enough. I can barely see the pipes that run underneath, let alone work on them.

I've also got the dreaded steering gaiter job to do, not looking forward to that one. I'll buy a couple of sets.
Top

Two pairs of high-ish ramps makes life even easier, with the whole car lifted level and clear of the ground.
Drive up one pair at the front, and jack the (lighter) back end up, to slip the rear ramps in.
Chris
Top

And that....
I can fit my ramps to some lengths of scaffold board I've adapted to raise them another 6 inches or so, makes jobs just a bit easier.
I can remember years ago my dad had some ramps with built in scissor jacks which would be great for bx-ING.
90 BX Tzd turbo 294k SORN undergoing major surgery
90 BX Tzd turbo estate 46k awaiting surgery
65 Peugeot Boxer Van the new workhorse
52 Toyota Rav4 180k Bulletproof Jap reliability
Top

I bought a pair of the hydraulic ramps from CJ Autos. They are excellent and can easily lift my Commers

Well, it's been a while since the last update.

I drove the car a few times, but the LHM leak got so bad that I was constantly having to top it up. I then decided to pressure wash off a bunch of dirt at the back, and got a nasty suprise. Other side was just as bad. Between those holes, some awful bodges that needed replacing, and the rotten LHM pipes, the subframe had to come off.

Fortunately, it turns out that not only do I know someone who can weld, he also has lots of experience with hydro citroens, and all the special tools. So I have employed his services. We agreed I would drop the subframe, then leave the rest to him. 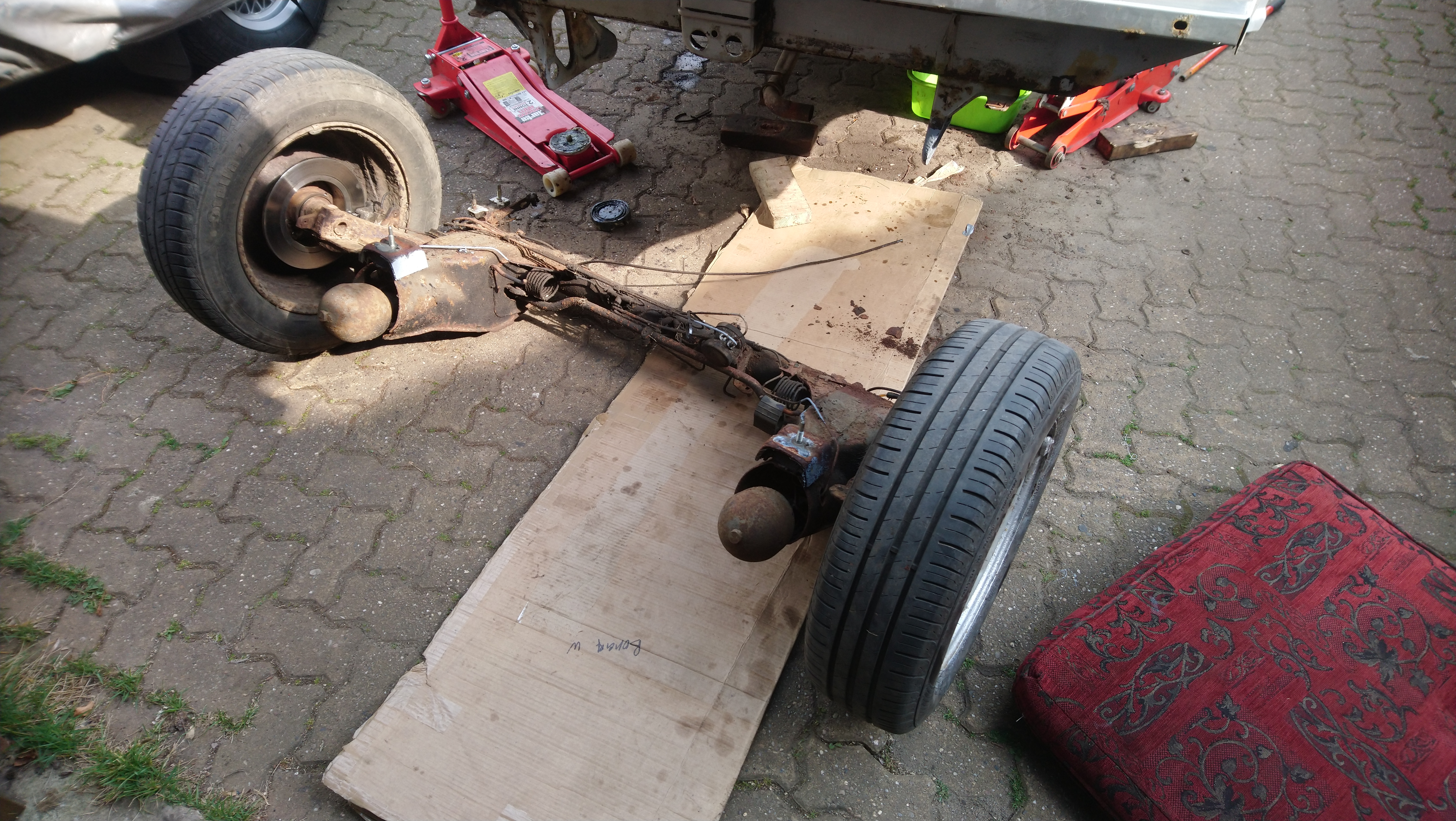 At this stage, the weather took a turn for the worse, rain every day for a month, I was (and still am) stuck at work, and so nothing much happened for a month. Until last week, when finally the welding began. I think he doing a very nice job. Some of the previous repairs were just badly fitting patches over the top of the rust. He cut all that rubbish out and seam welded new metal in, and where it was possible ground it all down flush. He's even been repairing a fair bit of non structural rust i'd never even noticed, might as well.

The rear is about 3/4 finished. Just some brackets and a quick plate on the boot floor left. Then the front will be getting some work.

While that's in progress, I painted the rear subframe. It's not going to win any awards, but at least it's somewhat better protected. I'm going to do my usual thing of smearing it in grease when it goes back in, it's worked well on my other cars. It would have been nice to strip this down further, but I don't have a way to get the spheres out yet, so cant' remove the struts. I also don't want to disturb the arm bearings, since they're in decent order. 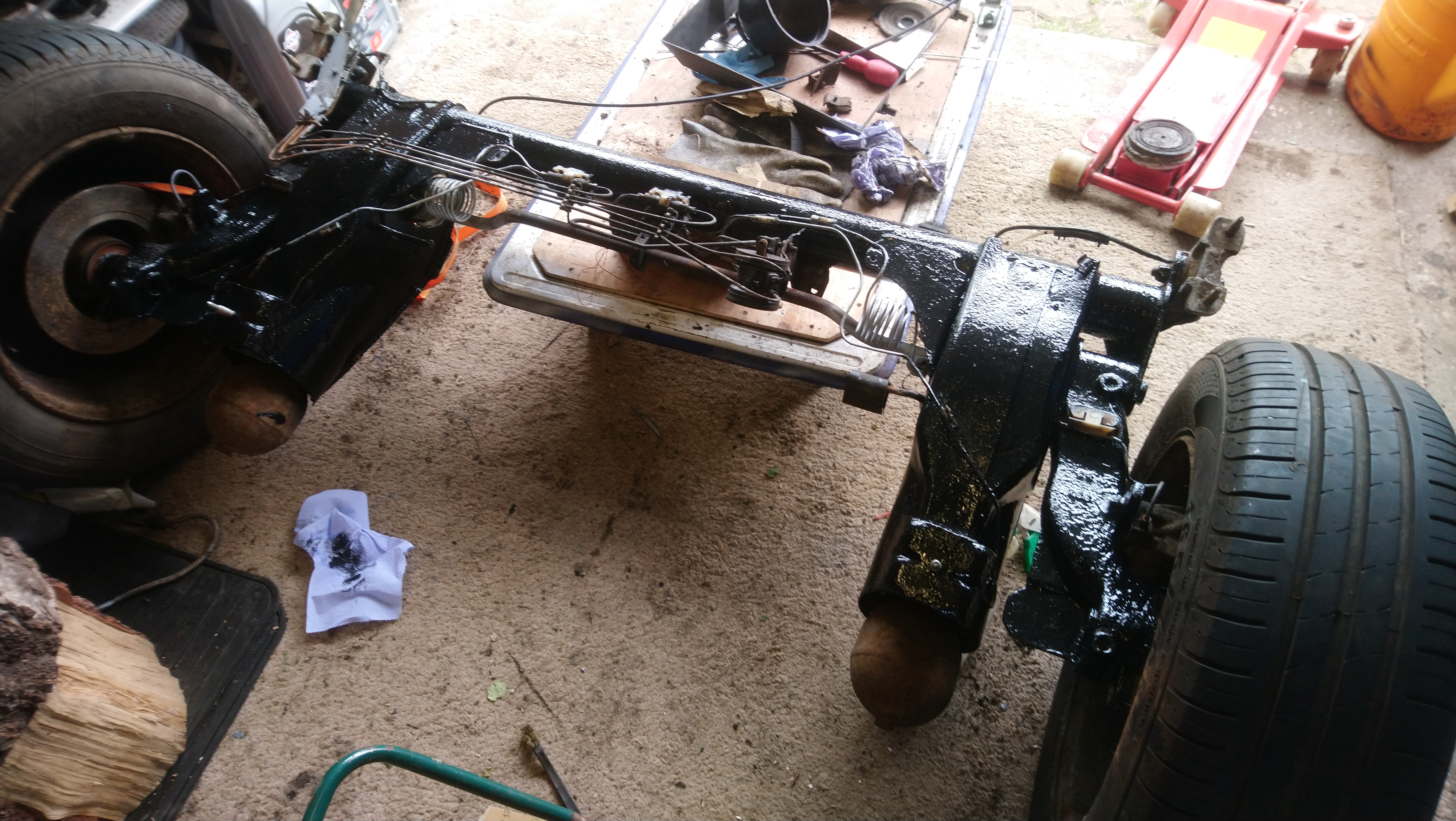 New spheres all around is on the cards when it's back on the road. It's not like it's that much easier to do them now compared to later. I bought a rebuilt FDV from Pleides which arrived fairly recently, but haven't got around to fitting it yet.

What else? Oh yeah, removed the front bumper yesterday to get some better access for the upcoming repairs at the front. 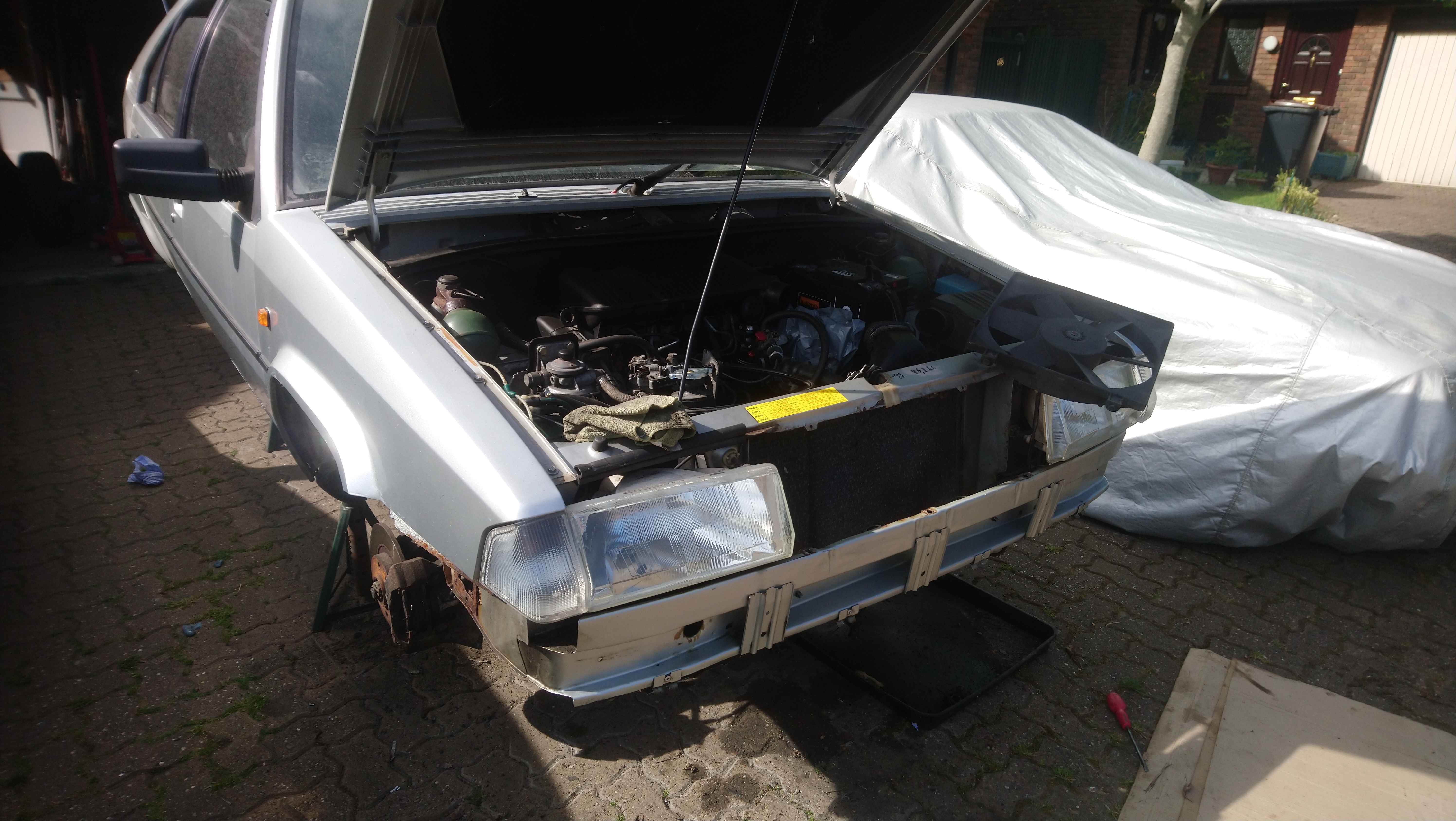 and today I cleaned the LHM reservoir, since it has to come out to get better access to the wing. Unfortunately it's rotten near there too. Still, gave as good an opertunity as any to clean the filters. They needed it. 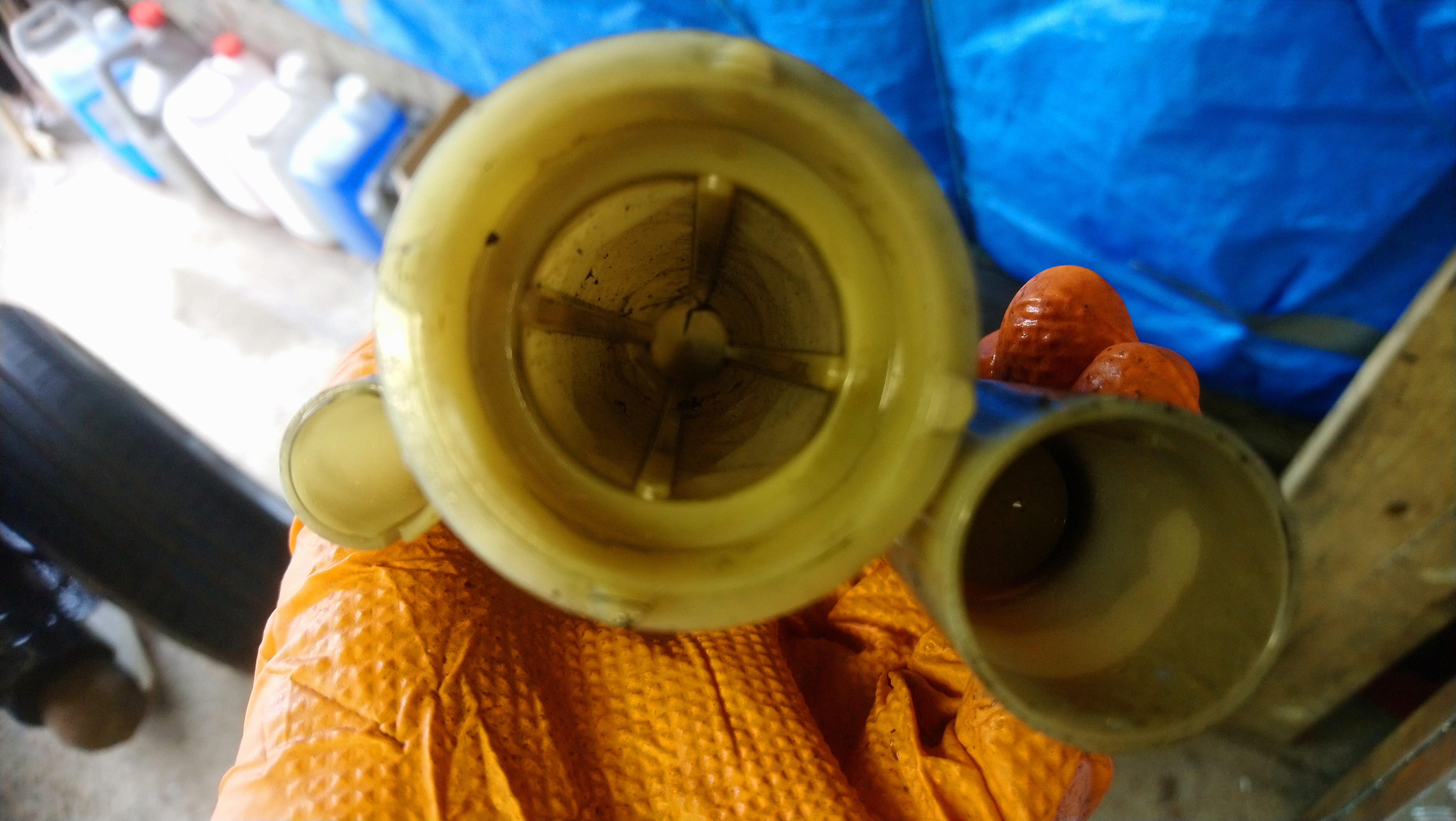