I am now the proud part-owner of a maroon 1986 BX19TRD, bought near Swindon. Not just any TRD, a LHD model, imported from Italy in 1994, (given a C registration) - originally purchased in Rome!!! Complete with original Italian document pouch, Italian owner's manual, Roma dealer sticker on the tailgate, Citroen Italy warning-triangle in the boot and an Italian concertina style cardboard sunblind for placing across one's windscreen on hot summer days. Story is that the original Italian owner passed it on to his son who lived in Camden, and he finally lost interest in the car or something and it was passed on to the Cit specialist in Swindon who had regularly serviced the car while the family were over from Italy. Indeed it was apparently abandoned for a while in Camden on a parking permit, and finally had to be moved when the permit was due to expire!

160,000 KMS on the clock, engine smokes a bit on initial start-up from cold, but otherwise is absolutely sweet as a nut and breathtakingly quiet. I am *well* converted to the worthy merits of the BX diesel. And more importantly, it is no slouch! It flies!

Bodywork has a myriad of scratches and dents (very Italian), and needed a *DAMN* good clean and T-cut. After cleaning it all afternoon, we are still not finished getting this car looking nice. It has those lovely early TRS alloy wheels, and 4 good Michis. Oh and at some point it has been given a metallic blue series II bonnet... We don't know why.

At some point it has lived in Switzerland, because it has Swiss "MOT" stickers in the windscreen for the years 90-94.

All electrics work (except several dash bulbs), interior is nearly mint, and there is no visible rust anywhere. Haven't looked underneath yet. No power steering or sunroof... Front spheres are absolutely solid, but the rears... I was able to bottom the car out when I pushed down on the back! It needs little things here and there like all the exterior door handle mechanisms are seized and both mirror adjusters are broken. Rear arms seem good, accumulator might be starting to go.

It has since had 2 new spheres at the front and rides a lot better! The paintwork looks a whole lot better after several T-cut and polishes - no pic of how it looked before I'm afraid! My friend took it on a trip to Birmingham and back recently and it was good as gold. On Saturday we're going in it to Chevronics in Bedfordshire to pick up my GSA

Anyway, I *finally* have some pics of the car to post here!! These were taken at the Popham Airfield Car Show near Basingstoke some weeks back. 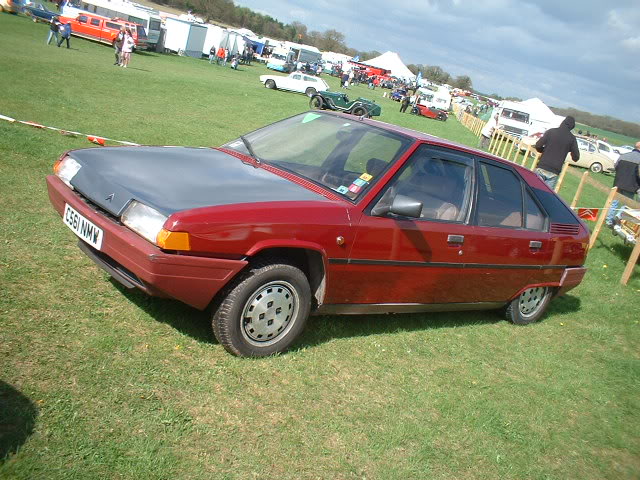 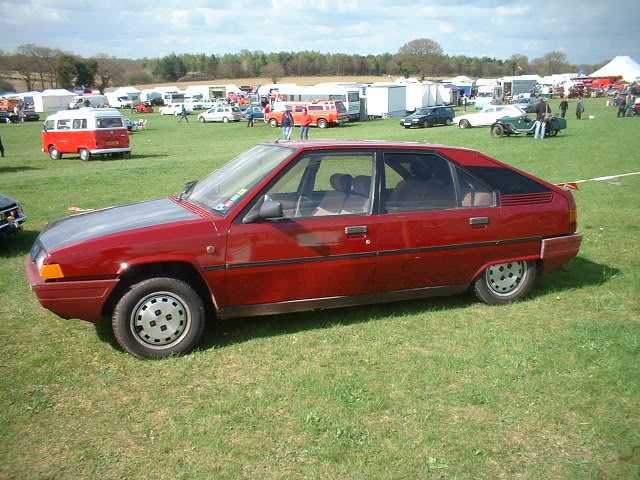 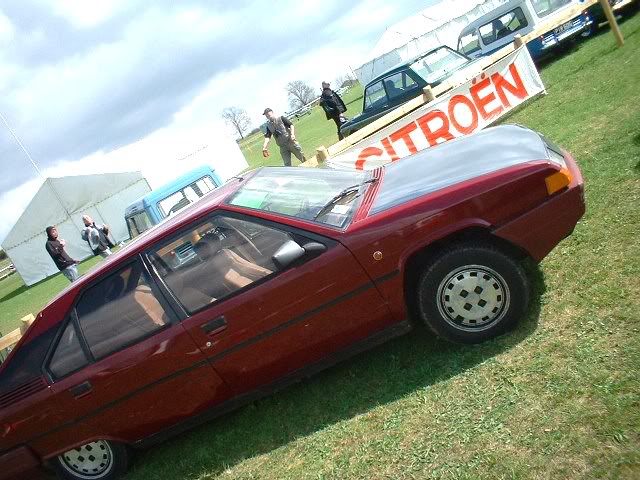 The alloys are actually a bit tatty when you look at them close up. I don't know the name of the Cit guys in Swindon, but I'll try and find out!

Swindon seems to be a haven for old Cits: we also bought a Visa 17D from there a while back, and my friend went to view a GS recently!

The coloured stickers on the windscreen seem to me to be "vignettes", that is to pay the annual fee for using motorways in Switzerland and they presumably show a motorway symbol with the year they are valid.
BX Leader 19 Diesel - 1986
Top

Nice looking car Mark. I`m going to have to go to a BX club meeting and start having a look at these Mk1 BX`s. There seems to have been a few bought by some members od this forum recently which is good news as they`ll undoubtably be looked after.
I didn`t realise they made a BX with metric alloys, what size tyres are fitted to these?
I recall BMW`s, Metro`s, some Granada`s and Montego`s having metric wheels (and the fun we had as tyre fitters trying to get them to seal

), are you sticking with these wheels Mark? It`d be nice to (i.m.h.o) as they must be rare now and add to the character of the car.
Vauxhall apologist.
Top

cavmad wrote: I recall BMW`s, and the fun we had sticking with these wheels.

How easy to be misquoted!

Nice to see another MK1. Looks a nice motor!!!

Well done on your purchace
Top

Is the bonnet awaiting paint? Or is it the carbon fibre look for street racing

I love those wheels! Do you want another car to go with it?
Top

tim leech wrote:I love those wheels! Do you want another car to go with it?

Stop trying to get rid of your car! You made your bed, lay in it!

Noooo! Ive found a load more work to do on the 16v even thought it look pretty doesnt it Ian! Rear arm bearings and a Cv joint so far plus abs sensor and a fair bit old welding!
Top

Is the bonnet awaiting paint? Or is it the carbon fibre look for street racing

Hi Kitch, yeah it has the beige interior, in very good nick except both mirror adjusters are broke. No sunroof but it has window deflectors fitted

Blue bonnet came on the car... it must have had a bump up the front at some point as it really doesn't fit well and the windscreen vent panel is cracked... it really needs a proper Mk1 diesel steel bonnet - there was one in maroon on eBay a while back but we were outbid!!

All: Thanks for your compliments

Cav: yeah will be sticking with the Metric alloys cos they look nice - at least from a distance... has a good set of michis on, will have to look at the size if I remember on Saturday. It lives at my friend Chris' house you see! T'was a 50/50 purchase...

God, soon we might have a Mk1 BX14 Leader returning to the fold (sold last year - not long after we bought it for £20 off an old lady)... and we're still waiting to hear from the owner of a maroon Mk1 19GT whom I spotted getting into his car near Chris' place in Farnborough in February... and pulled over and stopped him for a chat.. he said it was up for sale soon because his insurers were refusing to pay out the £1000 quoted to repair a dent in his driver's door

Looked a very very nice car with the same wheeltrims as your Mk1 GTi Kitch!

mnde wrote: it really needs a proper Mk1 diesel steel bonnet - there was one in maroon on eBay a while back but we were outbid!!

Hm ... our Mk 1 Diesel came originally with a plastic bonnet ...

Is that, why she is from the "Leader" series?

I also have a MK1 with an original plastic bonnet. I wonder if the steel one was only fitted to "high" spec cars....
this might be a signature
Top
Messages: 20