Anything about BXs
Messages: 17

My GT is now the proud owner of a metric alloys

(but read on...). Many thanks to Adam (what a lovely guy!) who swapped my wheels for the ones on the TZD(?) he's just bought. Both sets of wheels look much better on their new cars than original.

Here's the first picture of the GT with its new alloys: 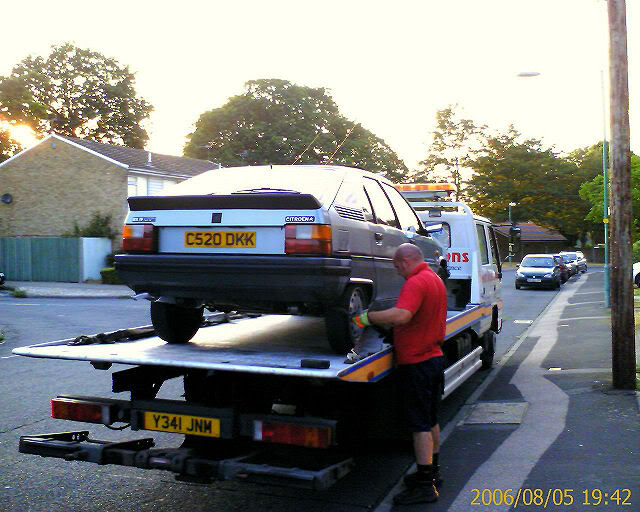 You might possibly notice a slight variance here with the general testing procedure for new wheels. Here's a little clue as to what happened. 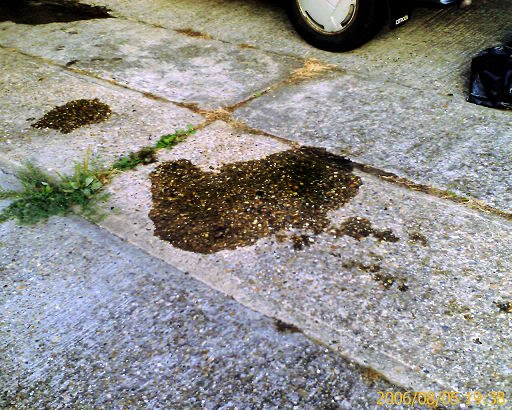 Yes, a good old LHM leak. And there was a lot more where that came from, most of it falling in a hastily improvised tray. Not sure which pipe actually split but it was rubber/plastic and had split just where it pushed on to a metal pipe; located just above the front offside subframe at the back of the engine bay just behind the front wheel. I guess it's a low-pressure return pipe of some sort; I'll have a closer look later. There wasn't enough slack to cut the end off and re-use.

It might just have come out in sympathy with the aforementioned new TZD as Adam was fixing a rather large LHM leak as I arrived, coming from a spookily similar location.

And I'd just changed my rear spheres in the morning, giving 120 miles of silky-smooth ride, the best I've ever had in a BX. Could changing the spheres (all 5 of them in the last month) have had an effect or is it just co-incidence?

Now, the question of 'metric' alloys. This is one of my new ones (from 1991 car, I assume original wheels): 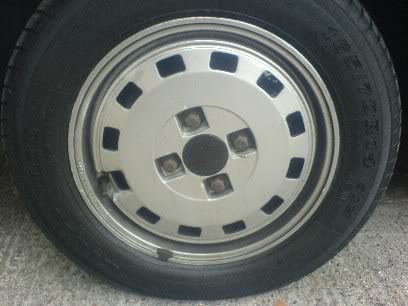 and this is one from a Mk1 BX seen at the CCC national meet last month: 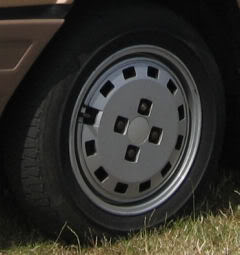 As far as I can tell, the only difference between the two is the colour of the plastic centre disc.

BUT - according to the Citroenz test of the BX 16 TRS (at the bottom) the alloy wheels take Michelin TRX 170/65R-365 tyres. Longstone tyres state that the TRX rim and tyre was designed to work together. The implication here is that you should always use correct tyre size, presumably Michelin TRX all round as I can't find any potential alternatives on the net.

HOWEVER - the tyres on my new alloys are 165/70R-14, which begs the question, has someone fitted the wrong tyres in the past (they're all non-Michelin, including the spare), or did the wheel size change to 14" for mk 2s from 365 (whatever that is), or have I got totally the wrong end of the stick?

There is a code on the alloys but I've only just remembered about it and as it's gone midnight I really don't want to go and ferret around for that now! But I will post it later.

I do recall someone on the forum mentioning that the version of the alloys for mark 2s had the black centre disc (which these have) and that they took 14" tyres. Can anyone clarify this? For safety's sake I would like to make sure I'm driving around on the correct tyres.... although I'm not too keen on paying the best part of £600 to replace all five

If they should really take 14" then I might just treat the car to a new set of Firestones at £35 each from Blackcircles. Provided it promises not to p*ss LHM all over them

Lastly many thanks to Adam and his mate (forgotten his name but he likes Alfas so is obviously a top bloke!) for all the help, tea and Boddingtons, and for the nice man from the RAC who brought me all the way home.

I'm sure I've seen these wheels with 14" rubber on 'em before but not sure whether it's correct or not. Nice wheels though!
Almost wish I had a set now.....
Cheers
Chris G
Smokes lots, because enough's enough already!

My guess is that the pattern of the wheel is the same - the difference may even be in the machining rather than the castings.
Top

I hate to say this, but if the alloys you have are wearing 14" tyres, then I think they are imperial alloys, and NOT metric ones.

There have been numerous situations with various car makes when metric wheels failed to become popular, and so the same design of wheel was changed slightly to take imperial tyres. So, you end up with wheels that look almost identical, but one is metric and the other imperial. Almost invariably the metric wheel is the early one, and the imperial one is the later one.

And I don't think it's a case of the wrong tyres having been fitted to metric wheels... imperial tyres simply will not fit onto metric rims.
this might be a signature
Top

I`m definately with Jeremy on this one. There`s no way 14" tyres will fit Metric wheels I`m afraid. However as they look like Metric wheels I think you have the best of both worlds: original looking and a huge selection of tyre makes and sizes are now at your disposal, plus (should it come to it) you can put tubes in 14" tyres but not in Metric ones.
Vauxhall apologist.
Top

I've tried to get the part number from the (non-metric

) wheels for a final check. Seems to be 5.00 B14 CH4.25 followed by what looks like SMR or SHR. Any chance of someone checking this out on pr.net?

Best photo I could get:

And just to show the effect on the car 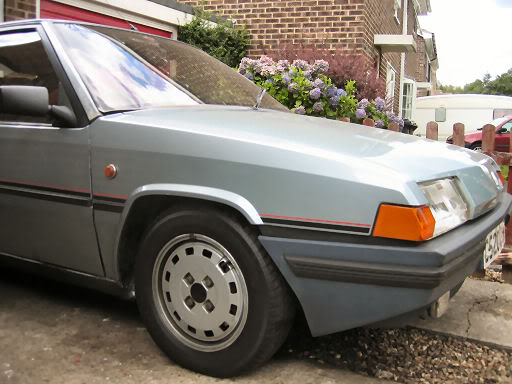 I`d hazard a guess that `5.00` means 5J (the width of the wheel) and the `B14` probably refers to 14" wheels, apologies if you had already thought that yourself.
Is that your recovery truck in the picture by the way?
Vauxhall apologist.
Top

cavmad wrote:I`d hazard a guess that `5.00` means 5J (the width of the wheel) and the `B14` probably refers to 14" wheels, apologies if you had already thought that yourself.
Is that your recovery truck in the picture by the way?

Certainly seems to be the case. No, the recovery truck belonged to an RAC contractor. Couldn't tell you anything about it I'm afraid ..... except that it had the mystical ability to draw all the neighbours, dog walkers, etc. out of their houses when we arrived home

Adam wrote:I cleaned the drive and spoke to mum and she was cool about it and will be in the BX owners club soon with my TGD!!!!!!!!!


Width of the wheel is 5", the J is the shape of the bead on the tyre/rim. Going by that code i wonder if it was a 'B' tyre bead shape? Have no idea what a 'B' type would look like though!


Do a search for the 'Tyre Bible' on google and it explains all about the strange bits (including what the 365 means!).

`J` is the width Vanny, 5J being (obviously!) 5 inch wide wheels, never heard it was the shape of the bead on the tyre/rim as I`m convinced they`re all the same with the possible exception of stuff like D20 wagon tyres.
I`m going to do the search you mentioned though as I`m intrigued to know why they`d say that.
Vauxhall apologist.
Top

ON CX's citroen produced 14" and 390mm metric rims in the same style.