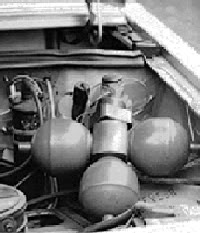 Good grief that would be soft suspension! I doubt you'd even notice things like speed bumps, pot holes etc.

Looks distinctly home-made though. Machined from a solid chunk of steel or similar.
this might be a signature
Top

Where did you find that, Ellevie?

It looks too good to be true but unless you did it yourself I can't see many people having the time/effort to photoshop this...
Top

I knew it reminded me of something

It's the genuine article --- an experimental passive suspension called the CRONE suspension created by a French group dating back about ten years. They used a BX as a test bed.
David

Did you know that the Benetton Formula 1 car used Citroen speres in its Active suspension also ?
BX owner since 1986
Top

I didn't know that --- they sure get around. I think Rolls Royce licensed them from Citroen as well.
David

Mercedes-Benz also use a very similar system as an "assister, self-leveler" on the back of many of their estate cars.

But the spheres are only available from MB, and cost £70 each!

I'd imagine that the RR spheres also come with a hefty price tag.
You could probably buy a useful BX for the price of fitting a set.
David

Given that new brakes all round on many RR cars will cost you FOUR GRAND(!) I'd say the spheres are likely to be a similar stupid price.

I actually played with the idea of buying a 380SE a few years ago and it had rear spheres but from memory, they had little to do with ride apparently but were there to keep it riding level when the boot and back seat was loaded.
When I went to take it for the test drive, I started it and was told to "wait until the suspension pumps up" and as I was driving a Cit I assumed he was taking the 'iss, but I then noticed the car rose slightly.
Thr RR club out here also had a combined meeting with the NSW CCC and the main topic was hydraulics and a way of exchanging information and specs and the cost of spheres and other parts was discussed. Regassing was also discussed as they were being shafted pretty well with some of their costs.
I don't know if that went much further than one meeting though.
Roller buyers, new don't usually worry too much about prices, but when they age a bit (the Roller not the buyer) it's the enthusiasts who have to face up to the nightmare prices.


Alan S
By the time you're old enough to know it all, you can't remember why you were learning.
Top

AS I understand it few repairers of Roll Royce understand the self levelling part of the rear suspension and simply abandon it when it fails - which probably accounts for the rather tail heavy look of Shadows - which I'm sure they didn't have when new.

Longshot here - RR pump operates off the engine somewhere by a pushrod or something - is it a GS pump?
Top

AlanS wrote:I actually played with the idea of buying a 380SE a few years ago and it had rear spheres but from memory, they had little to do with ride apparently but were there to keep it riding level when the boot and back seat was loaded.

They do and they don't. While the car still has normal springs, the damping is done with the fluid that goes to the spheres (same as a citroen) and as the spheres age, the suspension does get harder and harder. My Landlord's Merc 200 estate had gone ultra hard and bouncey at the back.... you guessed it, flat spheres (which when removed had about half a litre of oil in each of them and bugger all nitrogen.)

He'd been quoted over a grand from MB to sort it!
this might be a signature
Top

I suppose that CRONE suspension makes you drive like an old woman...
If this was an experimental passive system, what was it for? Variable damping perhaps, controlled by different holes in the spheres?
Top
Messages: 16