Heres my heap. Bought it in June 2004 for around £700 from a policeman who'd had it 3 months. He'd bought it from an enthusiast who'd had it 8 years. Originally it was a Citroen UK showroom car, and then a demonstrator in the Slough HQ showroom. 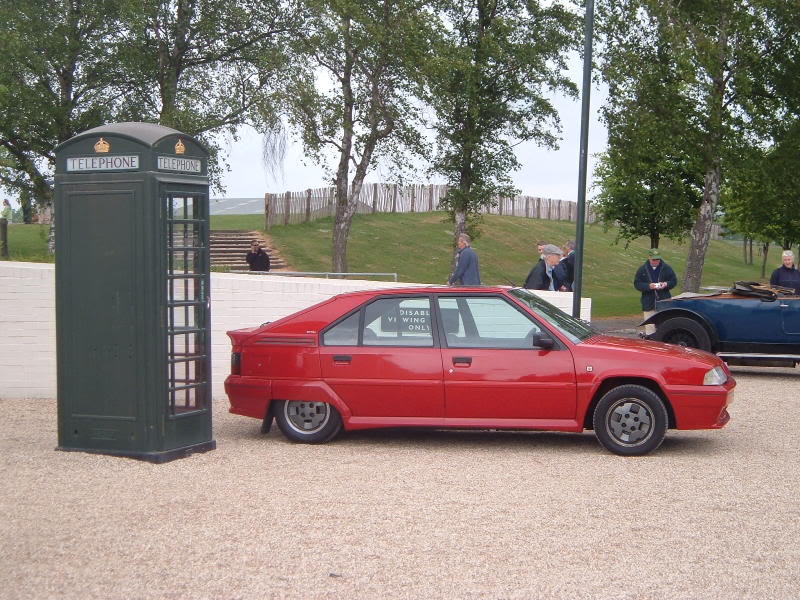 The car has had a fairly eventful life with me so far. It's had a new different sets of wheels, all being dropped in the end to favour the original Speedlines. It's also had a leather interior fitted (lifted from a TZD estate that got crushed)

After 7 months of ownership, I managed to experience the dreaded XU9J4 oil surge problem. I successfully bent the crankshaft and nailed all the bottom engine bearings. I rebuilt the block from the ground up, and did a light overhaul on the head which has proven to be more hassle than it was worth.

Since then the engine has recieved light tuning work, including:

Don't know if it actually goes any better to be honest

In May 2006, the car was used to record a low-rent television programme for Men&Motors/Discovery Turbo/ITV 3 & 4 called Used Car Roadshow. It was presented by Jason Dawe of ex-Top Gear fame, who loved the car, and Penny Mallory from Driven/whatever she was offered, who did not and made it fairly public.

It's now had the main front to rear pipes renewed for Kunifer ones, and the fuel pipes renewed with copper. Its also had a new screen, 4 new genuine 16v spheres (which aren't all that smooth) and new radius arm bearings.

Since then it's on the road in dribs and drabs. I frequently fall out with the car and always want to sell it or scrap it for parts. It leaks like a seive mechanically, and it's now rotten as a pear in places, but I doubt I could ever bring myself to get rid!

This car owes ALOT to Docchevron (Chris G). He repiped it, did the radius arm bearing and has welded a crater in the side of the thing. Without him it'd be scrap metal.
The national BX register - click to submit a car!

Heap my arse, thats a lovely car Kitch and you know it

That car would look great even if you shoved a set of £6-99 trims on it!!!
All credit to you for keeping her in such condition

Ey oop, non of that innuendo tomfoolery in me picture thread

But it is a heap. It leaks, it rattles, it knocks, it cains fuel (apart from the odd flukey 40mpg run) and its generally a pain in the arse.

It's a 17 year old car mate. They're all a bit ragged round the edges.

Aint driven it so cant comment, but it still looks better than mine.
Smokes lots, because enough's enough already!

Trust me, yours is far smoother, quieter and more refined.

I keep slagging it off I know. I always expect more than is fair to be honest.
The national BX register - click to submit a car!

Give me an open cheque and your car for a month and I'll make yours the same!

Looks really well that Kitch, very impressed. I have to ask one question though regarding your photos:

Isn't it a bit un-politically correct to go round viewing disabled people?

Have you had it on a rolling road to compare power to a standard 16V?
Vauxhall apologist.
Top

Have you had it on a rolling road to compare power to a standard 16V?

I'm partially disabled, although no-one takes my picture, not due to Political Correctness, it's cos I'm an ugly f*&^er!

Kitchs car is chipped, so it should be pushing more than 160bhp.
Smokes lots, because enough's enough already!

cavmad wrote:Looks really well that Kitch, very impressed. I have to ask one question though regarding your photos:

Isn't it a bit un-politically correct to go round viewing disabled people?

Have you had it on a rolling road to compare power to a standard 16V?

It wasn't unpolitically correct at all. I was taking a picture to show they do let them out of the cage and into the big playpen behind my car. See, nothing anti-PC about that

Nah it wasn't, thats a crude gag. I was merely blocking the disabled access to the event, forcing people with broken legs in wheelchairs to brave the stairs in the tunnel under the track!

Power-wise, I've no idea. Its no quicker than the black one that was recently written off, but it is notably quicker than the grey one I sold a while back, plus a tuned one on TB's so its anyones guess. I would stick it on the rollers, but I'm afraid it'll develop another leak on there and I'd have to pay to get the equipment cleaned