When you need a car, they are always expensive. When you don't need a car, they're cheap. Thus, when I didn't actually need a car, this popped up on frenchcarforum. Advertised accurately as a 1989 DTR turbo with a leaky water pump, it was for sale at £25 + tax + diesel in the tank.

Went up to North London to see the seller, and it transpired that he'd had the car for absolutely ages (something like 10 years if I remember correctly) and traveled all over continental europe in it. Now desperately needed out the way, as he'd bought a Xara Picasso instead. It had 4 months MOT, 2-and-a-bit months tax and about half a tank of go-go-juice. I offered £60, he agreed. Lashed it up on the A-frame, and dragged it the 170-ish miles home.

Looked it over properly, and what a nice car! Not very much wrong with it at all to be honest. A new cambelt and water pump were lobbed on it, and the gaffer tape over the sunroof removed so that I could unblock the drain tubes.

Just shortly thereafter, my landlords car when horribly wrong, so he got rid of it, and needed a loan car until he could find another. Enter the BX. He used it for the 2 months remaining tax, and then promptly bought 6 months as a thank-you. Ta muchly!

Then a friend calls up, asking if I have a car she can borrow for a bit. Er, yes actually, as it happens. Off goes the BX for another 2 months, earning another £60-ish quid in donations to cover tax and MOT. Lovely! At this point the car has made a net profit of 4 months tax. But the MOT is now due.

So the car gets laid up for a couple of months, and the tax cashed in.

Not long thereafter, the clutch on my daily driver 405 goes pop. Err... Need a car. Hmm.. the BX. Lob it at an MOT.... which it duly passes with just the one minor advisory. Cheap cars FTW! 12 months tax on it, and we're away. Weekly commutes back and forth to Wales knock the mileage up somewhat.

With the job I now do, I have access to a fairly well equipped workshop, so it was time to investigate the front suspension rattle. Pop it on a hoist at work, and discover worn front wishbone bushes. Could have been worst. At the same time I discover a hole in the exhaust, so that was welded up. Actually, it's more than just the hole that's welded up.... the joints at the transverse silencer would not seal up, so they've had the weld treatment too. The worlds only BX with a 1-piece exhaust system?

Currently, it's still my daily driver, racking up mileage left right and centre, at an average fuel consumption of just under 50mpg. Other than a failed alternator (which I still need to change... hitting it with a hammer to drop the brushes in a teensy bit further only works so may times!) it's been completely reliable, and an excellent mile muncher. It owes me nothing.

Here it is on the hoist at work, which is usually reserved for £tens-of-thousands worth of classic racing jaguar. 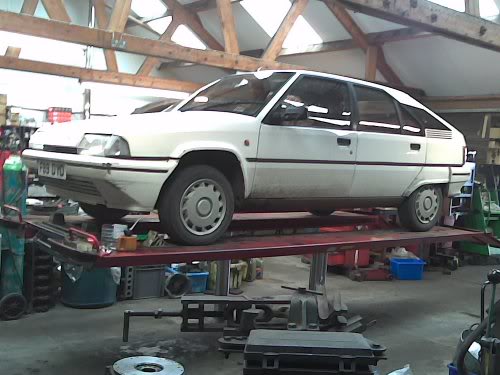 Cant say fairer than that mate!
My cars owe me thousands!!

Is that the same car you came up to the farm in??
If so it looked and sounded lovely last time I saw it.
Smokes lots, because enough's enough already!

Sounds lovely... yes. One of the smoother 17td engines I've driven. Also seems to be one of the more powerful. Uses minimal oil and no water, and at 145k is just about run in.

Looks lovely? err... it was dark when I was there wasn't it. It's looking a little tatty to be honest. The bodywork is ok, but the bumpers are terrible. The front one is scuffed rather badly, and the paint is flecking off the rear one. If I'm going to keep the car much longer, I really ought to do something about that.
this might be a signature
Top

Proper bargain that David, deserves to be kept and looked after I reckon.
Vauxhall apologist.
Top


Looks lovely? err... it was dark when I was there wasn't it. It's looking a little tatty to be honest. The bodywork is ok, but the bumpers are terrible. The front one is scuffed rather badly, and the paint is flecking off the rear one. If I'm going to keep the car much longer, I really ought to do something about that.

Well, yeah it was a touch on the unlit side of dark, but you've seen my cars, by comparison, your car is "as new"!
Smokes lots, because enough's enough already!