Chips (and no fish)

Chips (and no fish)

Ive bought a powerchips engine chip for my car for the pricely sum of £5, it says its a case of remove the old one from the ECU and replace with this and it wil give me 15bhp more!

Any one done this and is it that easy? 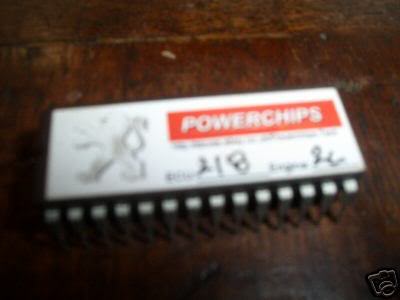 It is that easy.

Ok will give it a whirl!
Top

I'd be interested to have a go at that. Can you wait a week or so or are you fitting in straight away?
Over and out from me
Top

All it is is a re-mapped chip, so you got more grunt at the top end, with the loss of torque at the bottm end.

As for 15BHP.... If you rolling road the car before and after fitment and gives ANYMORE than 8BHP, I'll buy you a pint. But it wont.
Smokes lots, because enough's enough already!

Aye likewise mate, thanks for the mirror, as soon as the car's sprayed up I'll stick it on!
Smokes lots, because enough's enough already!

With the BX16V, I did a back to back test on a dyno a couple of years ago,

tried 3 chips, all one after the other.

The Superchip was the worst, less power and torque than standard chip below 6800rpm,and gave extra 400rpm on the limiter.

BBR Starchip the best for power and torque, rev limiter was unchanged.

and standard chip slightly below the BBR device.

Biggest difference was about 3hp and lb ft between standard and BBR at 6000rpm.

Superchip probably the best for 0-60 runs though- simply because the rev limiter was higher.

Apart from K&N panel filter, car was standard and made 153hp and 128lb ft torque. With the measurement errors, probably just what it was expected to do by Citroen.

No chip & 72bhp to play with, ahh all that effortless acceleration

If youve got it flaunt it Mulley.
Top

'super chips' and the likes are for the 'glue on trim' fraternity, most i have seen simply up the base fueling characteristic and increase the rev limit! That is NOT what ECU remapping is about.

One of the best things about EPROM based ECU's is that the power and torque characteristics accross the ENTIRE rev range can be adjusted through changes to the injector pulse width and timing. This allows the car to be setup to a specific driving characteristic of projected terrain, it also allows the balance of power to economy to be adjusted!

Upping the rev limiter and wasting more fuel are pretty much pointless! But now i have a spare ECU i know full well that i am going to start experimenting on a whole new level.

Have you RR'd the car Tim?

Think i might have to get mine RR'd in October

Mine's entirely standard, no super chip, mno nothing. Exactley as it would have been when Citroën built the car.
Mine give's 172BHP at the flywheel at 7200RPM.

If you know how to build a good engine to start with then the rest is a bit unnecessary.

As Vanny say's though, a full re-map is the only way to really improve overall performance, but that really has to be coupled with everything else. IE TB's, cams, valves yadda yadda yadda

I havent vanny no as I dont know where to take one, and to be honest Im worried about it dropping to bits lol The chip isnt fitted yet, I will stick it on and see if t makes a difference and let you know.
Top

tim leech wrote:I dont know where to take one


Best Rolling road i've ever used (though i haven't been or seen all that many!), last time i was on it we had all manner of cars going on the rollers and getting pretty much exactly what would be expected (unlike some rolling roads where you get the odd car that horrifically mis reads).

There also very good for giving the car a looking over and ensuring it isn't going to go pop!

Thats where i'm going as soon as i magic up some money.