Tell us about life with your BX, or indeed life in general!
Messages: 1031

The brakes are knackered....Margo that is, I noticed when I drove to Coventry last weds they were getting progressivly worse (if thats posssible), and when I parked up next to my mate Lee's identical car I tried his to see what they should be like and was surprised how good the anchors are for a drum set up (when in good health that is). On the way back I nearly didnt stop at a roundabout so stuck it straight back in the garage and slammed the door.

A new servo vac hose was fitted to replace the cheap thin petrol pipe fitted so it wouldnt collapse in on itself which made not a jot of difference so on Sunday with the help of the wife we removed Margo's drums, cleaned the linings, roughed them and the drums up with emery paper, refiited same and adjusted them as they should and bled a consdierable amount of air out of the system again! Result a firm pedal for a pump or two and then down to the floor again....arse.

Its one of two things....the remote servo fitted is shi*e and doesnt work or more likely its the master cylinder. New seal kits are £6 so one has been ordered and will be fitted (after the old one has been inspected and honed by a mate) Saturday but getting the cylinder out is a faff as its under the drivers floor and the locating bolts are obscured by the drivers torsion bar! Tomorrow night I was due to attend the local MMOC meeting with my Uncle, which I will still do, albeit in a new Golf which is unfortunate.

Wonky wheels TD Hurricane has gone off my drive, but seemed to like Leech towers as it refused to start for 10 minutes on Saturday evening before I drove it to Bourne Citroen Centre...some mad pumping of the primer finally did the trick but the fuels getting air in somewhere and the low coolant warning lamp and STOP lamp of doom scared me to death on the A46, a quick stop, removal of the connector on the expansion tank and cleaning of lots of crud rendered the lamp extinguised and we carried on to Chez Handley to pick up some fellow from Newark that claims to have a identical car.....(its witchcraft I tell ye), then on to Bourne to meet Sandre and Barry who was cursing at a DS which had french electrics...

We got home at 10pm after stopping at Grantham for expensive fish and chips (consumed in another Green BX in McDonalds car park) which were better than expected given the lack of customers in the shop and the language barrier (chinese I think), tea and biscuits were handed out by the wife, Ms Hurricane-Jones and Mr Hurricane-Handley departed at half 10 and I promply fell asleep on the sofa as it had been a 13 hour day.

Sunday was a lazy morning with a cooked breakfast, tea and toast before heading off to collect a boot load of scrap (Morris Minor parts I bought for £5 a sa job lot) and then Ikea to remind myself how crap my furniture is and come away with the obligatory vanilla candles and brochures.

Yesterday was better, another lazy morning, half mowed the lawn before new tesco lawn mower (which had been making awful noises for a while after mowing over some stones) gave in with a small puff of smoke and refused to proceed leaving a half manicured lawn.

Off to the tip with said mower (I didnt keep a receipt) and old bathroom cupboard and box for comfy new leather computer (expertly constructed by the wife on Saturday whislt waiting for me to return from work) then onwards to pick up the godkids and their Mum for a shopping trip to get Isobel her promised belated birthday present from http://www.buildabear.co.uk" onclick="window.open(this.href);return false; which was far more enjoyable than I imagined, with Olly (two) and izzy (now

being full of beans especially after I treated them (and myself) to a "Happy" meal....

Home by 4, netlix, feet up, snooze for a bit then off to Loughborough to let my mate in his house (I have a spare key and his were 50 miles away at home), more chippy food, quick blub at long last familes and then home again....

Well what a friendly bunch the Leicestershire Minor owners club are, a varied range of people, ages, sexualities and backgrounds! I felt a bit of a fraud turning up to my first meeting in a new Golf....but the chairman was in a Mercedes as he had mechanical issues too!

It was the two guys that had help run the club for over 10 years leaving do as they (a couple) were retiring up north so a party was thrown in their honour and we were made very welcome, so bbq, free drinks, and people took it in turns to come and speak to me as I was the "newbie" and made me feel right at home with offers of parts and repairs if required.

Getting severe BX withdrawls though still so have booked the TZI in for an MOT at the end of month ready for CXM.

On with the decorating...
Lots of Motors, mostly semi broken....
Top

No decorating done although I have the paint etc! Margo's master cylinder was rebuilt (what a faff) and still no better, we have brakes yes but they are spongey (its been bled lots of times) and the pedal is nearly on the floor......last night was spent entertaining 4 friends so we had to "down tools". I intend to bypass the servo tonight when I get home just to rule it out as im at a loss why the brakes are still naff.

Front shoes arent great so they will be replaced aswell.

On the BX front the GT sticking caliper is a pain....can they be stripped and lubricated (its just the hanbrake)
Lots of Motors, mostly semi broken....
Top

What state are the flexi hoses in Tim?
Mark Smith

Fine. Found that the feed pipe to the servo was very loose!

Oh you mean the GT, it passed its MOT fine, Its the caliper im sure of it.

I think I will park her up until next year as its done plenty this year.
Lots of Motors, mostly semi broken....
Top 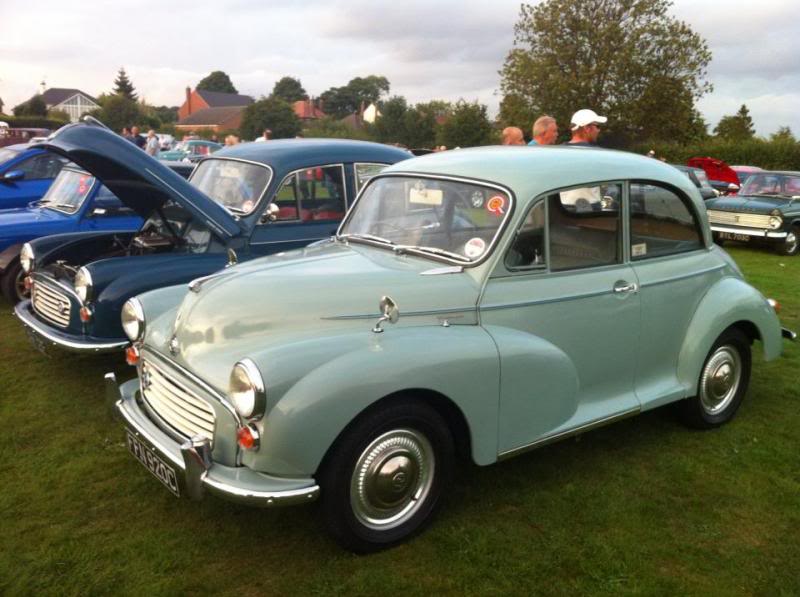 You could bring this on the Challenge in 2015! 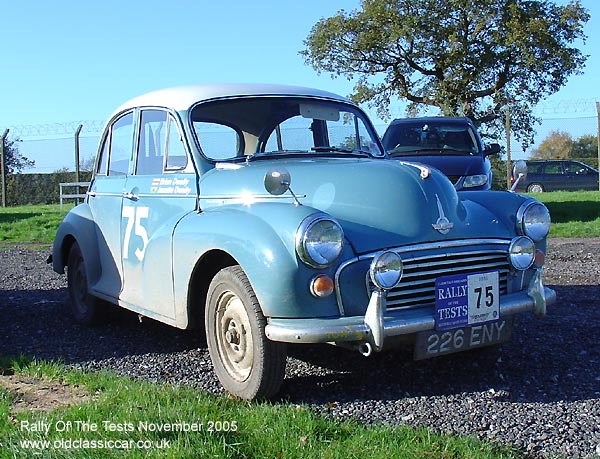 haha it doesnt stop and 60mph is about its limit so thanks but ....

The minor is fun for pootling round in, but ive done 100 miles in a day in at and was tired, deaf and had a bad back!

You should have got one of these Tim, much more fun to drive.
Very sad to have sold her. 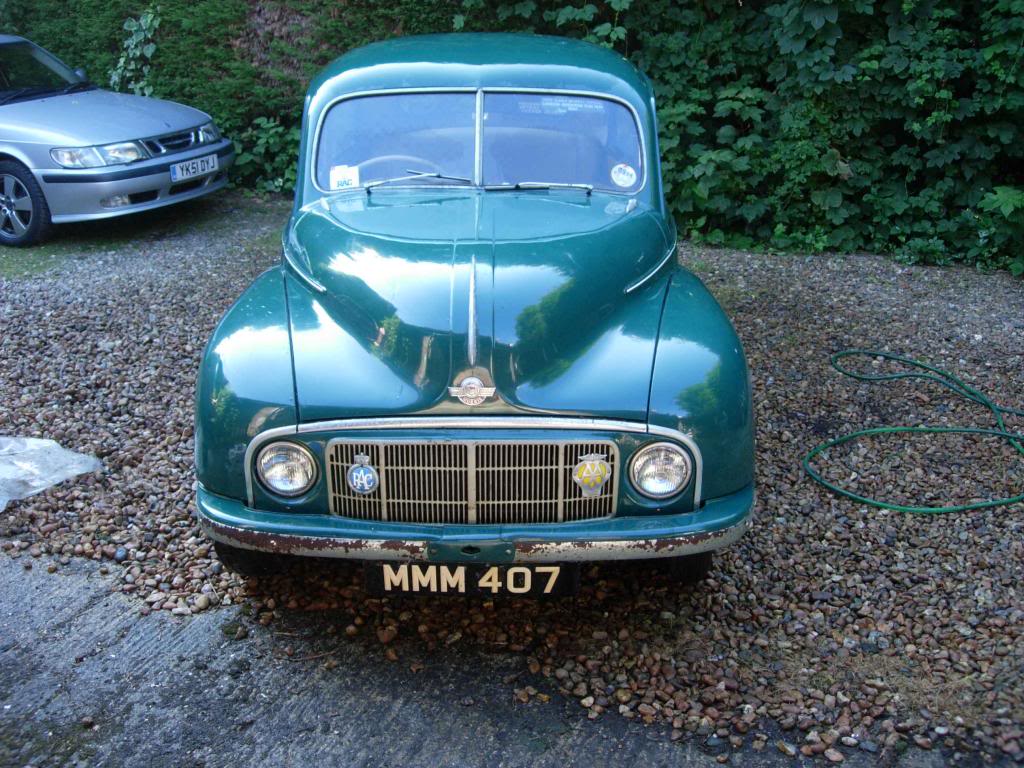 Tim, i see Margo is Canterbury registered,was the supplying dealer Caffyns or another company?
I am trying to remember if i made the original number plates for your car but it was a few years ago!!
2003 Saab 9-3.
Top

I had a Morris Traveller as my company car once in the 70s.
I hated it from day one until it went. Gutless, noisy, uncomfortable, poor heater which was blocked up by the slightest bit of snow, liked axle tramping sideways on bumpy bends and very bad for my back.

I think they are cool cars for a bit of low mileage fun though.
Aah what nostalgia does for ones judgement. Some people still think that those cute VW beetles were good cars.
The Joy of BX with just one Citroën BX to my name now. Will I sing Bye Bye to my GTI or will it be Till death us do part.
Top