I took advantage of the recent late snow to spend a couple of hours this morning skiing. It's a great drive from here to The Feldberg in The Black Forest - very fast and scenic mostly single lane with a few trucks labouring along which provide overtaking challenges. I was wishing I was in the 16v but the old 1.9D aquitted itself well - it does go despite the reputation 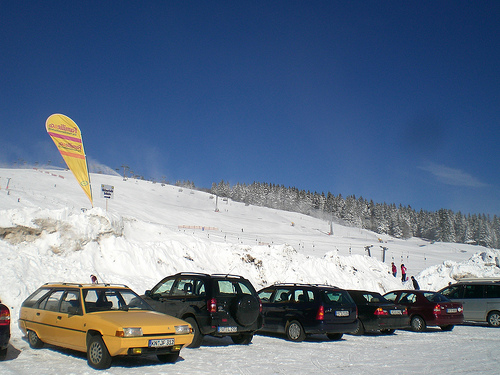 Makes for a beautiful contrast between all those black cars and the white snow. I just realised that this flowerish yellow really fits the BX

Nice car as ever todd, nice to see you have the "winter" tyres on.
Top

Is the sail for added overtaking ability???

Is the sail for added overtaking ability???

yeah, the sail and some agitated running Flintstones style through the floor, means I can just about get past bicycles going uphill!
Todd

the colour really does look right on an estate, i suspect it might not look quite so good on a saloon though.

Automotive Adventures, over on BXProject.Co.Uk!
Top
Messages: 7 • Page 1 of 1