I don't want to tell my grandmother how to suck eggs but have you sealed the very front edge otherwise water will enter when driving in rain. it's not clear on your photo.
1993 tzd estate, on sorn
1992 tzd estate, slowly being raided for parts
1992 txd estate, "doom blue" on the road
1991 4x4 estate, on the road
Top

electrokid wrote: is there any way to remove the fibreglass trim so I can have a closer look ?

How good are you at swearing? I've managed to get a set of saloon ones off, but it took one amazing amount of swearing to do it!

It is basically glued on, but every 16" or so there is a 3" flap which inserts into the body, i hope these are just to keep it flat while the glue sets, but they are practically impossible to get off in tact. How difficult the job will be is directly proportional to how much of a monkey the fitter was when applying the glue.

I am making the assumption that the estate ones will just be longer versions of the saloon ones!

barry badger wrote:I don't want to tell my grandmother how to suck eggs but have you sealed the very front edge otherwise water will enter when driving in rain. it's not clear on your photo.

It's a good point, and no I haven't (rightly or wrongly) My logic was that:
a) I've never had a leak whilst driving, and I think the water is coming in close to the middle roof rail support, so water would have to be forced in a long way when driving to reach this point
b) I wanted to let any moist air trapped in there dry out in the future.

Time will tell whether I've made the right decision!

Today saw the fitting of one of Lana's Christmas presents to her MINI - an automatic dimming rear view mirror. It will automatically reduce in reflectiveness if someone has their headlights on behind her. I thought it would be a simple swap, but there was no wiring present for the new mirror and the old one contained the receiver for the central locking. So I ran some extra wires, and relocated the receiver in the headlining.

Once I had done that, a worried looking woman wandered up the drive. It turned out her husband had done some exploring in his car, and got it stuck on a nearby track. I sensed his life was going to be a misery for the rest of their holiday...

So I went down in the Disco to give them a tow, for which she was very grateful. He'd driven down a 1 in 3ish rutted gravelly hill, and then (unsurprisingly) failed to get back up it. Once I had found the towing eye there was no trouble in pulling him up. I was interested and amused to hear how it was the fault of the car for being FWD, and "If only they'd put a sign up saying unsuitable for motor vehicles". The fact that it was a private track seemed to escape him - with some people it's always somebody else's fault!

How good are you at swearing?

I can work up to it if I have to

maybe a summer job... maybe try it on a scrapper first

Erm, tough one to answer, i believe they're refittable without any agro, certainly not warped or twisted, and the only damage is the aforementioned locating lugs being partially snapped/cut off.

However the car was scrapped and the runners are in storage, so i've never actually had to refit them!

Tonight's task was to sort out a small bit of rust at the bottom of the N/S C pillar. I'd prodded at it earlier in the year, and the 'surface' rust had crumbled into a hole. I started to cut it out before I thought to take a picture, but it was just big enough to get a finger into. 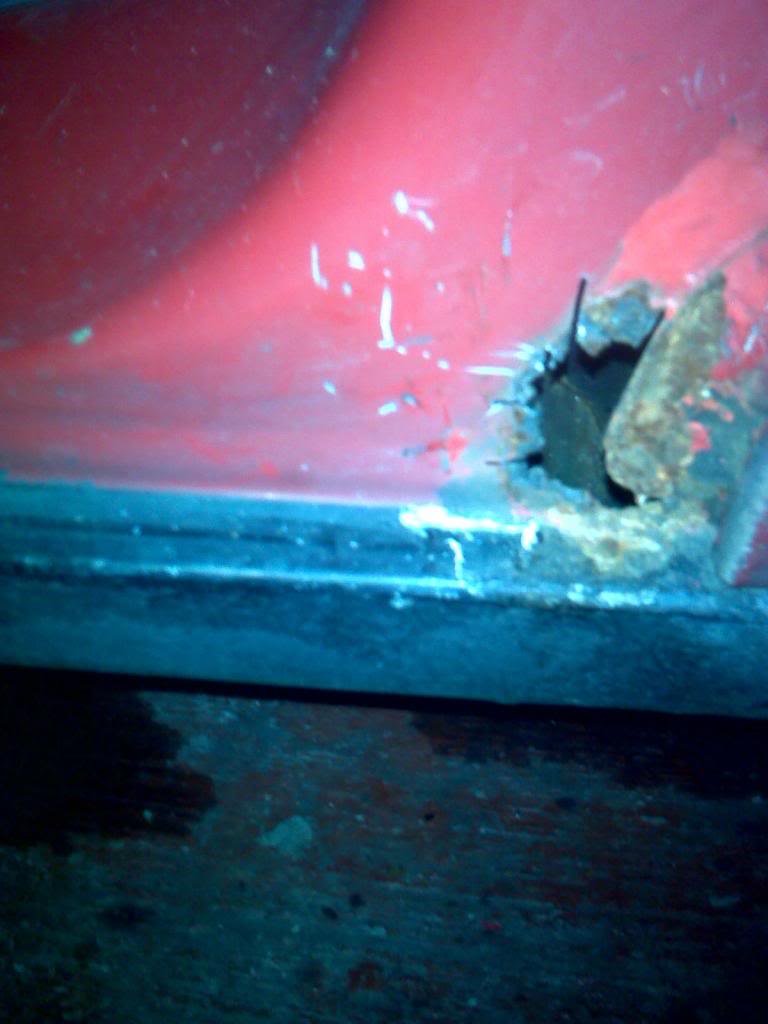 After cutting all the rust away I could see inside the sill, and was pleased to see that the cavity wax I'd been regularly spraying inside had coated all surfaces uniformly, and I could see no rust on the inside. I butt welded a small patch in the hole - the welding isn't brilliant as I couldn't use the mask with a headtorch, so had to do it blind (the two blobs on the sill itself are where I nicked it with the angle grinder 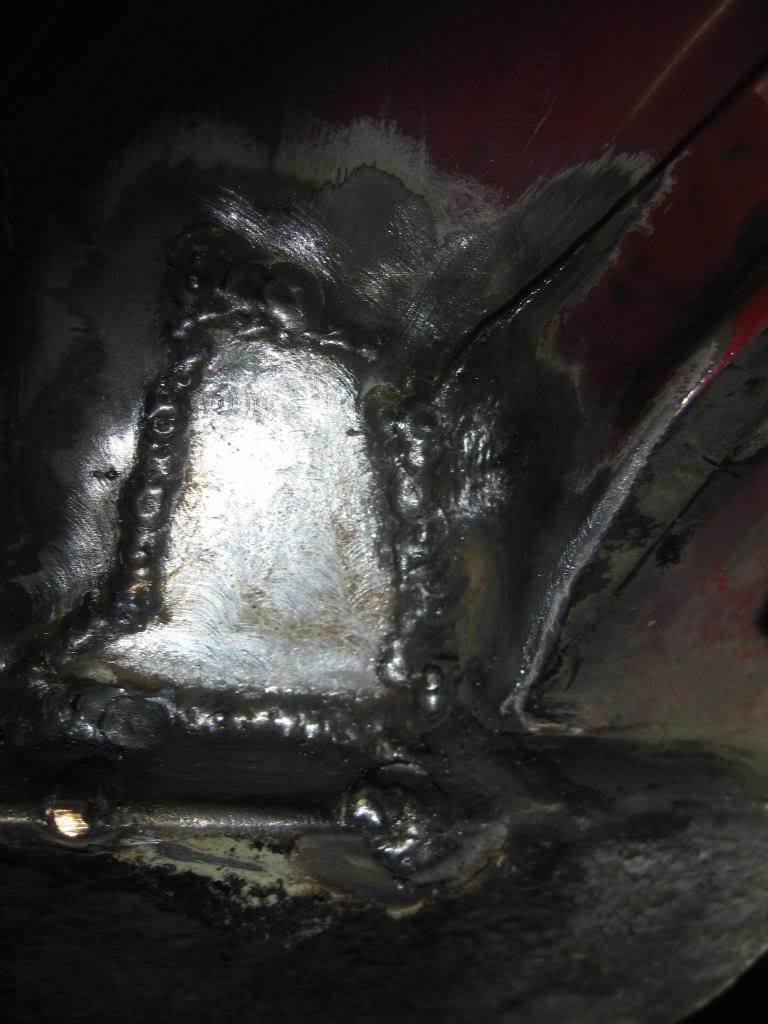 But once I'd taken to grinder to it, it didn't look too bad: 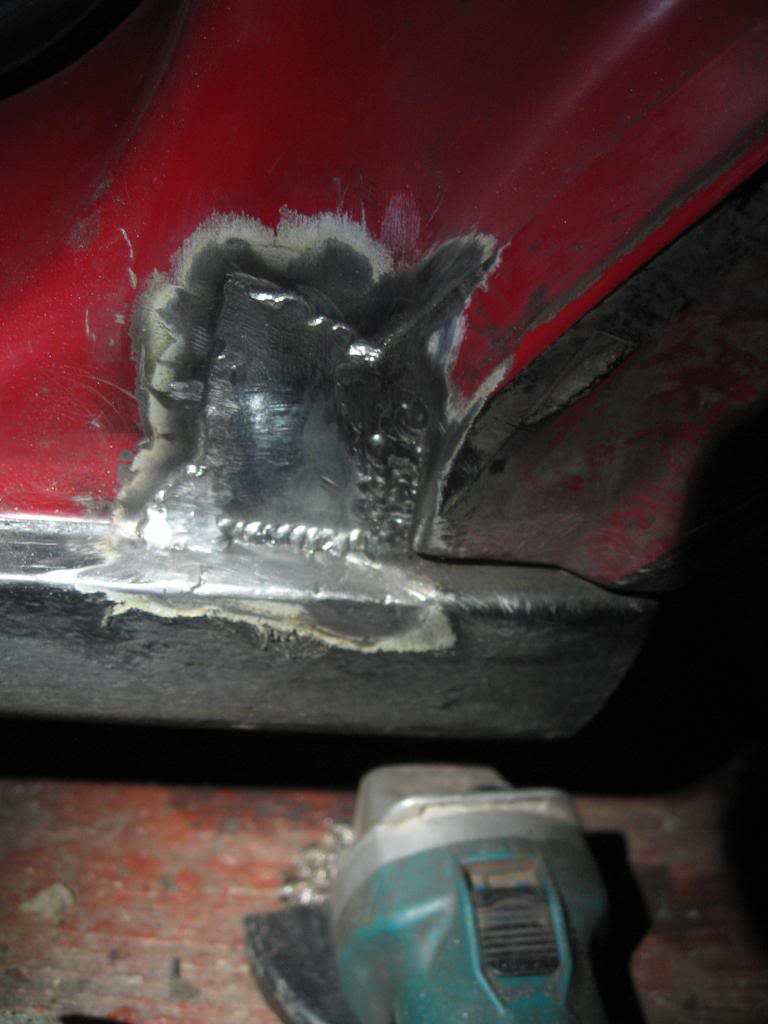 Now I've got the plastic stone guard off, I'll do a proper job of de-rusting the wheel arch lip, as there's a spot of bubbling underneath. The other side has next to no rust at the bottom, although the seam is bubbling higher up. That'll be my next job - either that or the A pillars which need a bit of attention. All those quick 'slow the rust down' jobs are catching up with me now!

There's always something to deal with with a bx it's like painting the forth bridge it never ends. When i phoned the guy up the other day who's selling the 4x4 estate he was telling me how they don't suffer from rust.

Don't tell me, he said it was all made out of plastic?

To be fair, I think they rust less than a lot of similarly aged cars, but they do hide it well which can be a mixed blessing!

Any older/high mileage vehicle will need more tinkering, and I don't begrudge spending the time on it. It's done 15k miles last year, and been completely reliable. I'll give everything a good check over and hopefully it will be equally trouble free this year

Bit of a weird one now, but I wire brushed away the paint blisters on the spot welded seam where the rear outer wing affixes, and a sizeable amount of water ran out!!! I'm guessing maybe ~150 ml, bearing in mind it's been in a dry garage for the last few weeks, and hasn't been driven since October.

Anybody seen this before? I'm not (yet!) familiar with the box section arrangements around there, so need to work out where to drill a drain hole and where it could be getting in. I've teased apart the seam slightly to let it drain, and the surfaces between layers are unrusted, and the water is clear so that's a good sign. Bit of a puzzle though at the moment as I've yet to take the wheel and interior trim off.

Crap photos, but after getting my head inside the wheel arch I understand a bit more about the construction! 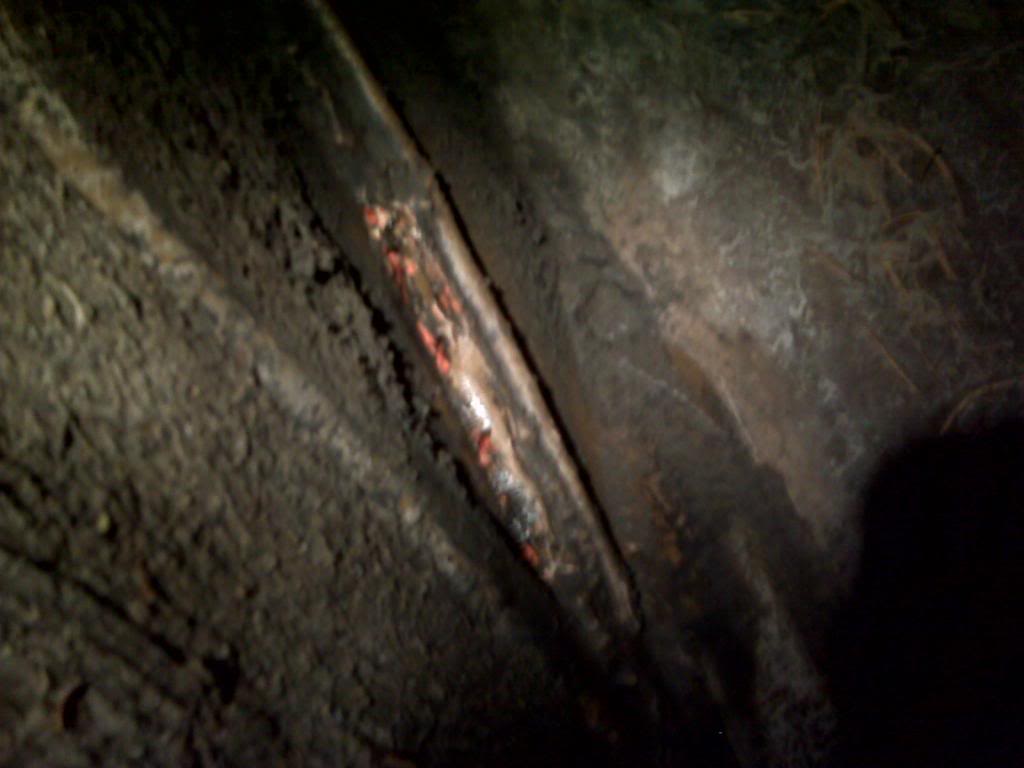 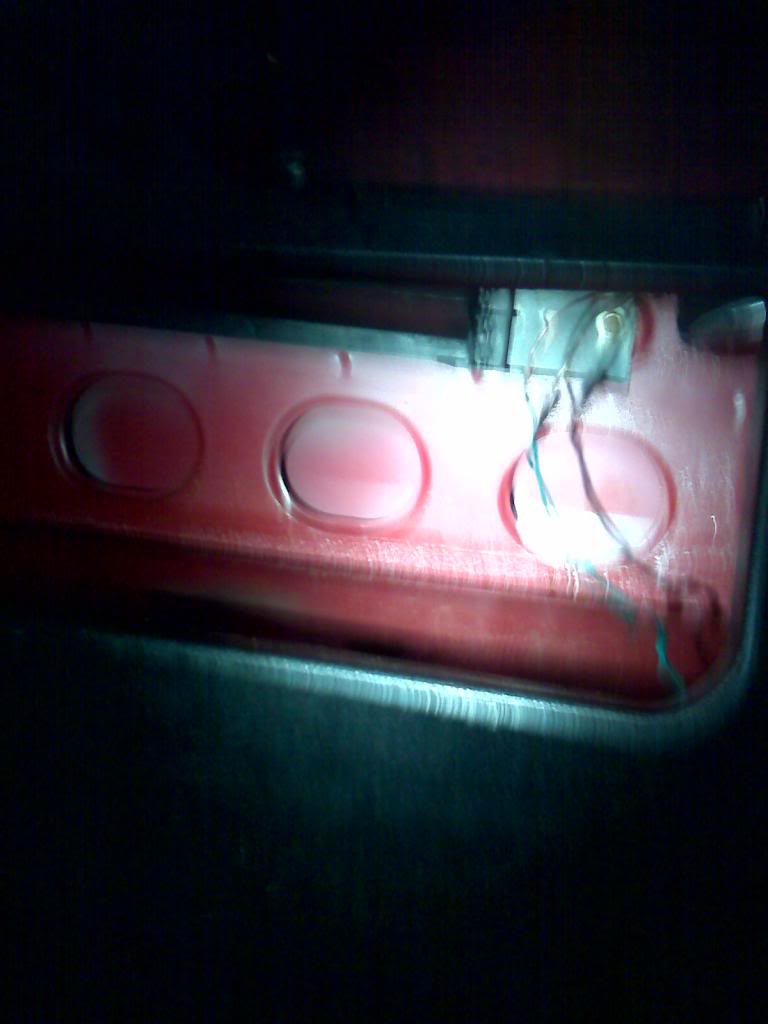 The lower part of the seam inside the door shut is accessible from the inside of the wheel arch, but in my case this is fine on both sides, probably due to frequent Waxoyling.

What I think may have happened is water from washing the car, or from driving rain, has gone in through the vents, and just sat in the box section. I've now dried it out and removed as much sealant as possible, and the only rust is that inside the door shut. I fear the other side may not be so good, as the blistering there has broken the paint.

Or maybe condensation from the leaking sunroof?

Vanny, no sunroof, although I'd like one! Barry, you could well be right - once everything is back together I'll stick it out in the rain and sit in the boot to check for ingress.