Not quite what I was meaning but

Reminds me of a joke I heard once – imagine a large glass jar which you then fill with rocks, rocks about 2" in diameter. The jar is full, right? But then you pour small pebbles into the jar, and they fill the spaces between the rocks. Again, the jar seems full. But then you pour sand into the jar, and that fills up everything else. The moral of this is that the jar represents your life. The rocks are the important things - your family, your partner, your health, and your children - things that if everything else was lost and only they remained, your life would still be full. The pebbles are the other things that matter like your job, your house, your car. The sand is everything else. The small stuff. If you put the sand into the jar first, there is no room for the pebbles or the rocks. The same goes for your life. If you spend all your time and energy on the small stuff, you will never have room for the things that are important to you. Take care of the rocks first - the things that really matter. The rest is just sand.

You take a pint of beer and pour that into the jar – proving that now matter how full your life is, there’s always room for beer.
Top

Been a bit quiet on the BX front (still!) recently although have got as far as buyning a 27mm spanner to remove the suspect injector.. The 205 16v passed the MOT and has been running around nicely returning about 35 mpg, not bad considering the acceleration is addictive!
My wife's Megane needed new rear dampers after one of them snapped... "It's gone all bouncy and there's an awful clonking, can you have a look?" Back to everyday use for the Discovery until the BX is back on the road, that had a new rear wheel bearing last night.
But the big news *ta da* is on the house. For the first time in its history and the first time for us in 2 years, it has an upstairs shower!!! I'd put the shower tray in a while ago, but the 4 foot thick stone wall was a little daunting to have to run the waste pipe through...
So I hired a biiiig core drill and diamond core, and gave it a go.

Not too big a hole on the inside 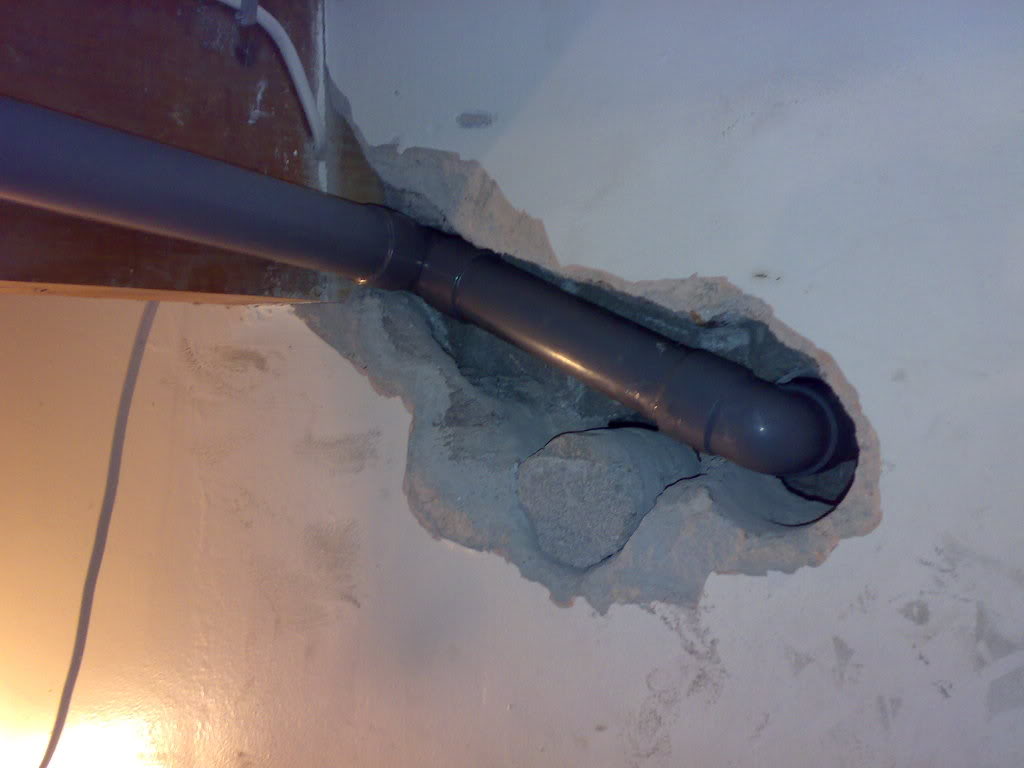 ) and hitting the original granite wall the core soon came off second best. This resulted in a slightly larger hole on the outside... 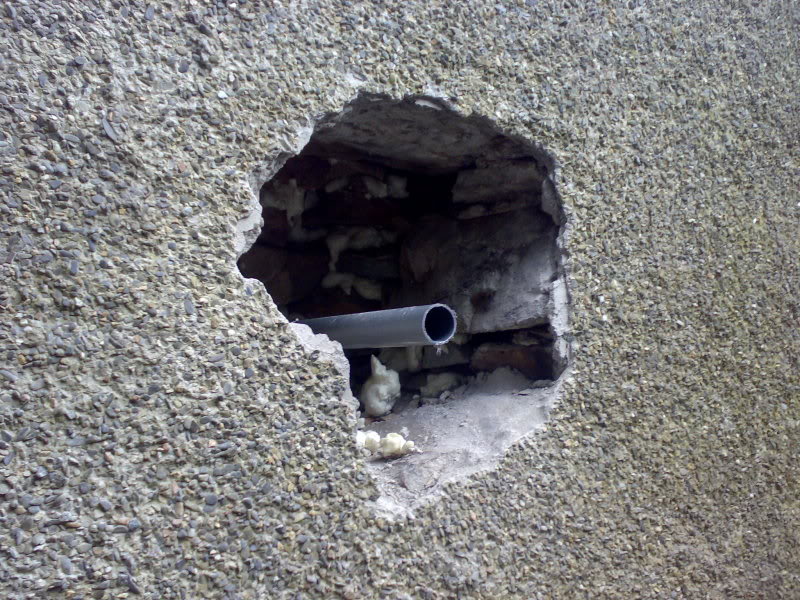 I did the hole for the waste from our new kitchen while I had the drill, it roughly took 20 hours of drilling in 2.5 days to make 2 3" holes. My hands weren't exactly steady afterwards (and the celebratory drink(s) didn't help steadiness either!)
This week I will mostly be cutting up an old Foresty Commession water tank (gone through 11 cutting discs already!) to load into the Xantia shell, and weighing the lot in. Any takers for Xantia parts shout up now.
Top

That last picture looks as though it was taken in the ruins of 1945 - watch out for snipers!
Good work getting through that wall - looks quite well made!
Todd

toddao wrote:That last picture looks as though it was taken in the ruins of 1945 - watch out for snipers!

Given where you live I'm surprised that you talk of snipers and 1945...(Don't mention the war!)

Yes the walls are very well made - the sizes of the stones are huge. The hole on the outside was made by removing just 2 stones, with the centre of the wall being dry filled with smaller stones. I uesd exapnding foam to hold them in position while I removed the outer stones. Above the hole is an even bigger stone which fortunately acts as a natural lintel, how they lifted it up there 200 years ago without mechanical assistance is a mystery. And to think that in the 80s they covered 3 walls of the house with manky pebbledash when IMO stone would be much better looking.
Top

This weekend I have been mainly running scrap around. First to go was the remains of an old water tank. 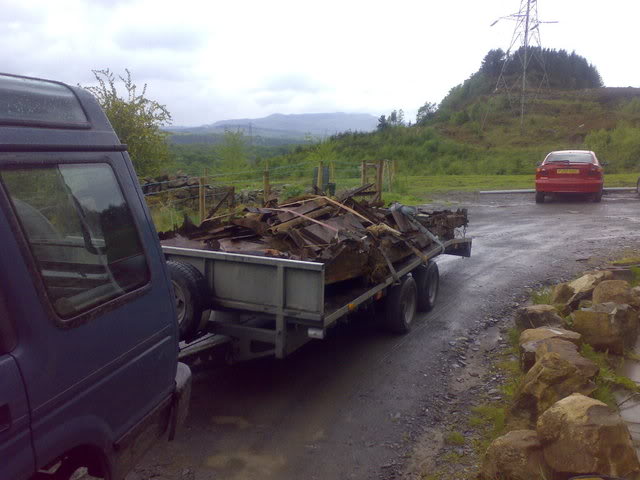 Followed by the engine donor for the BX (do I get a prize for scrapping a Xantia? 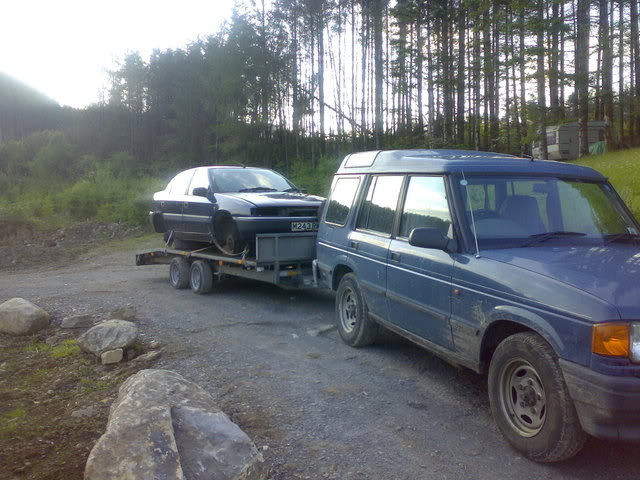 What amazed me was how much the price of scrap has risen, last time I scrapped a car I got £30 for it, now I was paid £160 per ton!

Not all good news though, whilst draining the diesel out I managed to slice my finger to the bone with my newly sharpened knife. Owww!

I didn't have the presence of mind to take a photo before I applied the 'bandage', but it looked like a burst sausage...
Top

Where did you get the LPG conversion kit from Mat?
Over and out from me
Top

Hi Ian, I got it from Keith at WTV, http://www.lpg-kits.com/. He was pretty helpful when fitting the kit although the garage that checked it for safety critcised the quality of the kit and instructions. Having said that they aren't going to praise the competition, and IMO they (the garage) are a bunch of robbing barstewards (it's a long story!)
Are you thinking of doing it on your 1.6?
Last edited by mat_fenwick on Wed May 21, 2008 11:41 pm, edited 1 time in total.
Top

Converting the 1.6 would be purely for my entertainment as it doesnt do enough miles to really warrant it.

The price of the kit for our BX is HALF the price of Tinley Tech. I wonder what the differences are?
Over and out from me
Top

Just realised that price doesnt include the tank

Update time, and this time it does include a bit about BXs (unfortunately not good news, but more on that later).

I spent Friday swapping a mate's 140,000 mile escort engine and gearbox (he had a noisy diff) with a 23,000 mile engine and box. Also new clutch/flywheel/water pump/cambelt/CV boots etc. Took 14 hours, a few set backs on the way!!! Including a very damp thunderstorm.
Now he has a very sweet engine but the gearbox sounds worse.

I managed to sort out the non functioning speedo on the 205 as well, it was the drive gear - fortunately I managed to use the one from the Xantia gearbox and that was one job that went better than expected.

I had previously narrowed the rough running on the 1.9TD BX to one cylinder, by slackening off each injector in turn. 3 out of the 4 made it worse, but no. 3 made no difference - apart from reducing the smoke. So I went to the scrapyard and picked up a replacement, popped it in, and.....no difference.

I am no suspecting that it has lost compression on that cylinder, as fuel is obviously getting into it, but not burning. Before I take the head off I will swap say no. 4 with no. 3, and see whether the problem follows the injector, as I may have another duff one (fingers crossed!) The target is to have it sorted for the Huntingdon show, I went last year and it was good fun. Gives me something to aim for anyway, just need to find an extra hour or 3 in the day.
Top

I can relate to that. It helps to sit around drinking

trying to work out where they've gone
Todd

mat_fenwick wrote: Not all good news though, whilst draining the diesel out I managed to slice my finger to the bone with my newly sharpened knife. Owww!

I didn't have the presence of mind to take a photo before I applied the 'bandage', but it looked like a burst sausage...

Owww's the word Mat! Did you count the digits before you bandaged it

Time for another update methinks. First of all I will echo what's already been said about the CCC show, I didn't even look at all the cars although I did enjoy looking at the ones I did see. I'm not a massive fan of polish and shine (as you might have noticed from the van!) - I found ren16tx's BX14 much more interesting as it has that aged look.
The great thing was meeting up with lots of like minded people and chatting cars etc. I must apologise to jonkw who introduced himself simply as "Jon" to which I replied "John who?" My brain was obviously slightly fuzzy after the journey (and I don't think my mental capabilities improved through the evening...) Also apologies to Mrs. jonkw for singing a Levellers tune down the phone to her in the wee small hours. Right that's who I remember having to apologise to.
I've returned with a lot more enthusiasm for my BX, must sort out the valve clearances and hopefully get it running sweetly again. Problem is I have a new project to steal my time. 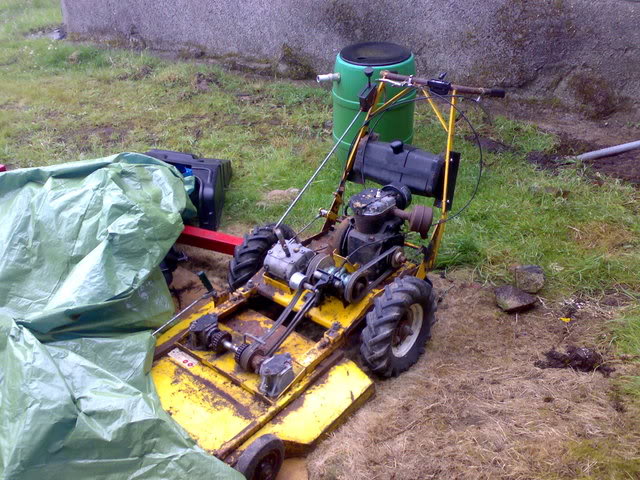 No engine cowling and no pull start mechanism. Also no spark and no means of engine identification as the plate should be on the missing cowling. All I knew about the engine it that it wasn't the original for the mower. But only £57 and I found a guy who identified it correctly after only asking 3 questions! Obviously the Docchevron of the mower world.

OK, so once that's sorted it'll be back to working on the BX (if I can avoid house DIY for a while longer) Just need a break in the weather really, the only time the sun shines is when I am stuck in work.

mat_fenwick wrote:I must apologise to jonkw who introduced himself simply as "Jon" to which I replied "John who?"

Mawnlower racing - fit it with Nitrus and wach your grass shrink. Having said that am I missing something? £57 for a non running mower? You can get BX's cheaper than that.....
Now a Rotorvator I can understand.....
Top
Messages: 1938