A few updates on various things:

BX - fitted new front tyres to it and decided to go for Uniroyal on the basis that a few people had recommended them and they were cheaper than the Vredesteins I'd used before the current set of Firestones (again problems with lifespan). First impressions were that they were rather 'squirmy', but that wore off after 100 miles or so. It's always difficult comparing tyres when you're replacing a worn out pair, but am impressed so far!

Discovery - LPG system still performing excellently! One difference between this and earlier systems is that the coolant must be over a certain temperature to switch over. It's perfectly possible and IMO highly desirable to switch over to gas ASAP both for cost and to avoid a rich petrol mixture washing oil from the cylinder bores. Cruder systems such as the single point mixer and the crossover system I had before would let you do that, as the fuelling for LPG was totally separate. With this system running from the petrol injector times, when the engine is cold the petrol (and therefore LPG) injector times are both lengthened. LPG doesn't need the enrichment as it is already a vapour, so would run too rich is changed over straight away.
I think I have an idea though - simply have a relay operated by the gas ECU to switch between the petrol ECU coolant sender and a fixed value resistor corresponding to a 'hot' resistance. The gas ECU has its own gas temperature compensation anyway, as the injector duration obviously has to vary with temperature and pressure.

Van - I've fitted an on board water tank, both for ease of filling (no heavy container to lug around) and also to give us more capacity. I'm also fitting an on board LPG tank to the chassis, which will free up a bit of interior space and also a little more capacity. Plus it's cheaper, I'm paying the equivalent of about £1.60 a litre for the small Calor cylinders, but can get it from the petrol station (including 30 odd pence road duty) for 77p a litre! Possibly I could claim the road duty back, but I suspect I would lose the will to live in the process...

All the bearings seemed in perfect condition, with the exception of the little end bearing which was slightly discoloured. I thought it might have overheated and softened slightly, so will replace that too.

I will have to seriously consider looking at my chainsaw, at some stage, in the future

Got to fix the one I borrowed too, no bloomin' oil-feed and I hit a metal shelf bracket last time I used it...
Top

It is all simple enough, except where Peugeot use the same colour wiring twice in the same section of loom. Nearly finished now.

BX currently off the road with a faulty front height corrector which I can't get at because the donor 406 is parked over the pit.

I could LPG the Bx, but
1: I don't do enough miles in it to make it worthwhile and
2: Where would the tank go? There is no wheel well, and the underside is very low & exposed.
I would not want a big barrel tank in the boot either.
It is our only hatchback, and is handy for moving big stuff around in.

Another reason why your landrover LPG system uses coolent temperature to switch on is to avoid getting liquid LPG in the engine bores- apparently this can be damaging.

I'm willing to be corrected Mike, but I can't see how liquid LPG could get through the vaporiser? The old Discovery had a single point mixer system, which would switch over at any temperature straight away, as soon as the revs went over 2000rpm. So even in winter, a quick blip of the throttle after starting and straight onto gas. I did have an airlock after changing the head gaskets once, which meant the vaporiser iced up. I suppose IF that happened then liquid could pass through. In the event though, the engine simply cut out.

I wouldn't LPG your BX if I was in your shoes either, for much the same reasons. If you were willing to live without a spare however, a tank could go in place of it underneath, ideally with a protector plate but I would think still legal without. Obviously not in the original cradle! A modern LPG system may be more difficult to set up too, unless your BX has a lambda sensor?

That reminds me, I have a copy of the text from COP11 if you need to reference any of the legal requirements. I was shocked as how badly my (professional) install had been done as there were several things not permitted in the spec. Let me know if you want it and I'll email it over.


scarecrow wrote:I will have to seriously consider looking at my chainsaw

Looking at it's not going to fix anything!

I'll take some photos of the rebuild of mine, maybe that will spur you on? Or bring it to one of the meets - it'll give me something to do other than drinking...

Drinking and chainsaws - now there's a combination to warm the cockles of your heart.

At the moment I have my nose buried so deeply in bookish stuff that the chainsaw only gets an occasional sidelong guilty glance. You never know, I may take you up on your offer one day - I am still considering a move up your way, but money is holding me back at the moment. I think I'd rather find a place owned by a country estate as they're less likely to give loads of hassle and sell-up after a couple of years.

Thanks for the offer Mat - maybe we could do an exchange - I cut some of your firewood whilst you fix my saw...
Top

Just to rub it in Steve 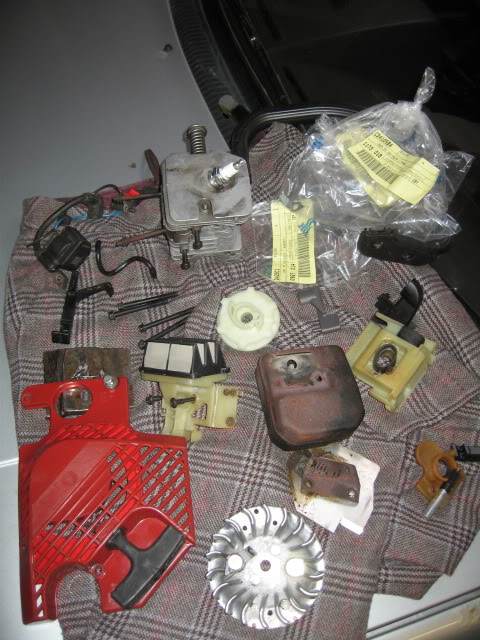 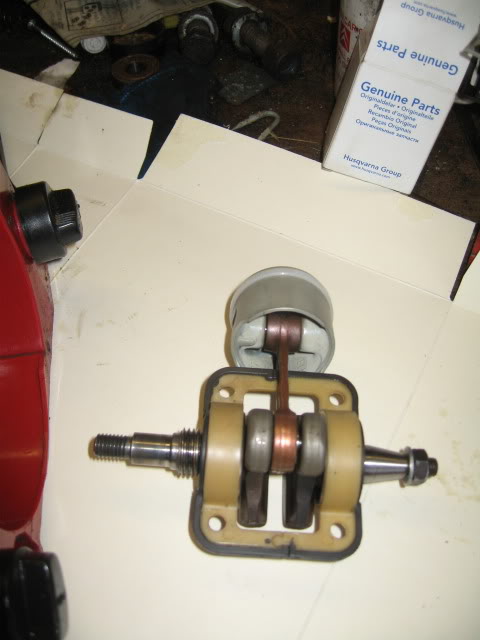 Piston installed in barrel with lots of 2 stroke oil 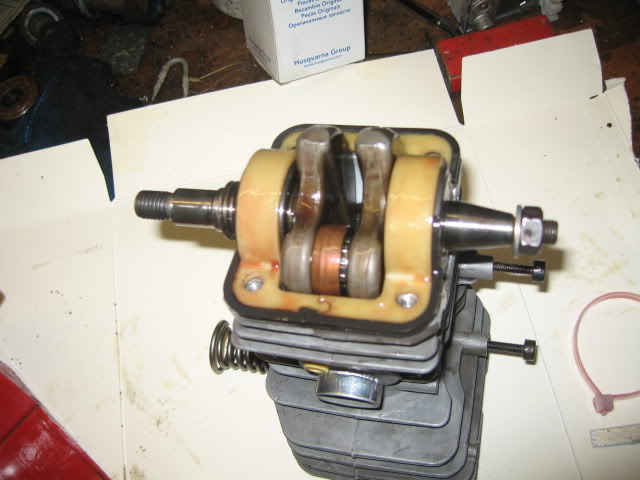 Barrel back on crankcase 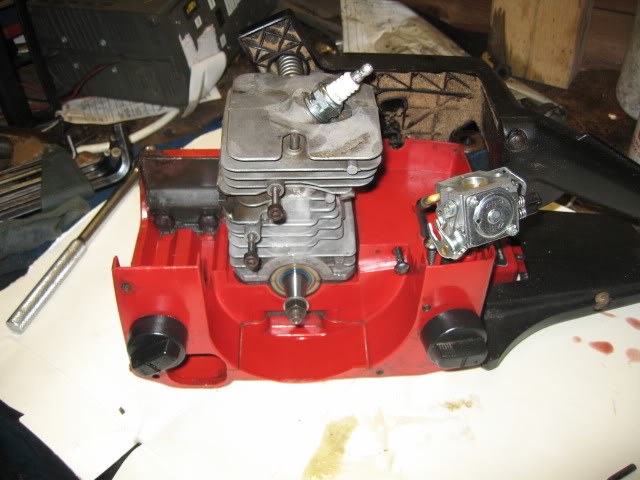 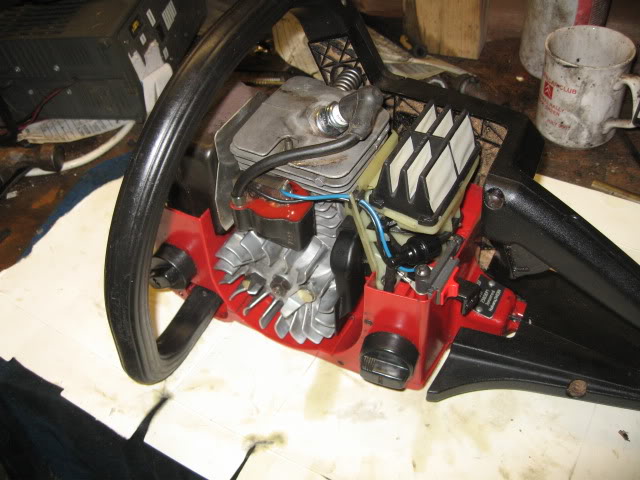 I'll probably finish it off next week as I need to warm the engine up and retorque things, and have a busy (non working) weekend coming up.

What are you reading? After 4 years living here we've finally got a bookcase so can unpack my books from their boxes. Unfortunately I can't remember any of the plot for the one I was half way through, so have to start again!

There's plenty of caravan parks up this way, so maybe you could rent a pitch/static caravan in exchange for general handyman services around the site?

If there is not enough heat to vaporise the gas, it would remain liquid,hence the temperature sensor on the vaporiser for the interlock.

If the vaperisor was cold, perhaps it could pass liquid 'gas' if the gas valve was opened.

This is what you describe, but if it just stalls the engine, then no problem.
I was told (can't remember who) that it was bad news for the engine, but perhaps that was wrong.

I would like to see the COP11, as I have just been using good practice & common sense in my installation. It will be inspected next week so I can keep the insurance company happy.

Hanging the tank under the BX would not be so bad if the car did not sink after use. I think some kind of tank shield would be advisable.

No lambda sensor on my BX, so I guess the gas efficiency would be lower than on a closed loop engine management system.

I may have to consider this more seriously if petrol prices keep rising.

Big deal about the 1p reduction in the budget- the price has gone up 2p a litre in the week since then.

I am lucky my daily commute is only 12 miles total.

Oh - I want to take mine to bits too.

Don't worry though, I wasn't angling to move in with you Mat

and I'm not looking for a job - I just like to give something back if someone does something for me. Preferably not money!

How much were your piston and bearings (they're the same as mine (xp266) I believe)? I think I might need to rewire the ignition as the wires all look very perished - though I might get away with your suggestion to heat-shrink some new insulation over them...

I am reading "Changing Environments" at the moment. No time for frivolous novels here

The last novel I read was "A tale of two titties" by Darles Charwin.
Top

The XP266 has a 66cc engine, mine is only 50cc so with my piston you may experience *rather a lot* of piston slap...mine shares a piston with the Husqy 49.

I had the choice of a genuine one for about £60 or a pattern one for £28. Bearing was £6. The only problem with the pattern one is that it lowered compression a bit, so I went for the genuine one. To put things into perspective though - the XP266 sits in between the current 357XP (£705) and 372XP (£830), so is a decent saw and worth spending a few quid on.

I am reading "Changing Environments" at the moment.

Victor Schauberger had some interesting things to say on that subject - recently read "The Energy Evolution" which is a translation of some of his writing - well got halfway through it anyway - it's very heavy going and quite unclear in many ways. "Living Water" (current read) is about Schauberger rather than by him and is much more understandable but the ideas are quite esoteric and I'll only really know if the writer (Olaf Alexandersson) has a handle on the principles when I get to the end of the book !

Thanks, it's back up and running perfectly now. I've set it up slightly on the rich side to help with breaking the ring in, but even so is giving noticeably more power than before.

BX needs a new handbrake cable, and I might take it off the road temporarily when the tax is up at the end of the month. Lana has just been made redundant, and as she won't be using the Discovery much I might use that, seeing as it's taxed etc. I was planning on taxing the van, so I can always get to work in that if she needs a vehicle.

Sorry to hear about Lana

Look on the bright side - dinner on the table when you get home, all the firewood cut for you, happier missus, sherry mornings...

Oh! Should I rephrase that?
Top

...depends on your career plans I guess

Maybe...it would make more sense the other way around! I suppose that she will have more energy now, not having to get up early for work

It certainly has been an eventful 12 months, hopefully the next 12 will show a bit more stability. If we can get by on what I bring in then that would be an ideal state of affairs, but time will tell.