You have been productive!

Actually, we did fit new distributor cap and rotor arm to the CX22TRS - I think the ones on there were the 1988 originals! 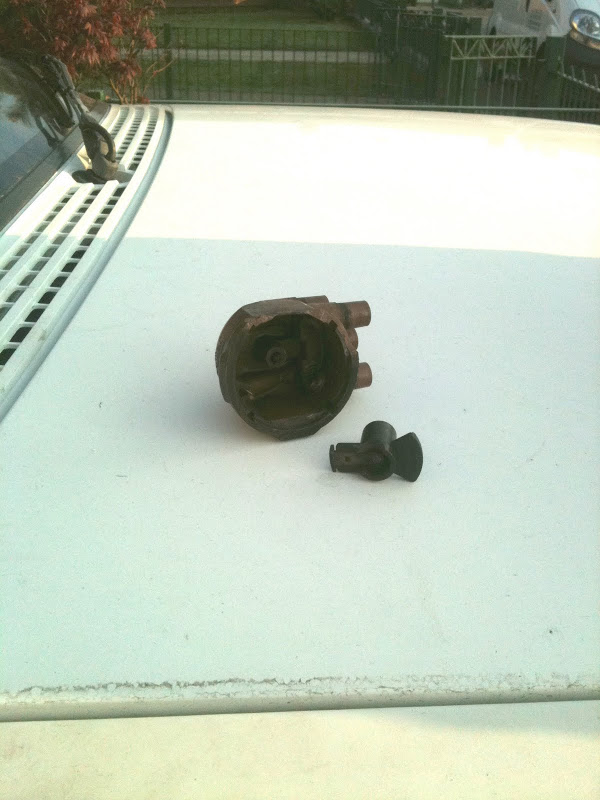 The old rotor and cap both had chunks missing, and the cap had to be tie-wrapped on at one side. Needless to say it runs much happier now

You could, perhaps, do with my trailer for hauling wood - I don't seem to use it much these days now that you can't turn up at the local tip without getting the third degree or being sent off to a commercial waste site

Not easy to make out on the photo, but there are a set of roof bars between the timber and the roof! We should be OK for a trailer thanks - we have a horse trailer that we normally use but it is elsewhere at the moment, and my Dad is going to give us a 7' x 4' box trailer soon. Plus, the wood we'll be burning next year should be from trees we've felled that are close to the house. At the moment they are a bit too green to burn well, so we have to go off into the forest and collect windblown dead trees.

Barbecue (I assume!) sounds like a good idea Ray - we haven't had one this year yet but the weather is getting mighty tempting.

I must get some roof bars - I should say proper roof bars - I did buy some on ebay but they are the wrong size and fitting despite having BX stamped on them.

I did discover today, during a trip to the local tip, that I CAN take the trailer there to carry household rubbish - which excludes 'Construction and DIY waste' - very long list of such exclusions but garden waste is ok (as long as it's not 'earth, soils including turfs') but I have to apply to Surrey County Council for a permit - then at least I can put it in the trailer not the car.

Yes - logs need to be as dry as poss to burn other wise the flue can block up in minutes. I plan to put in a wood burning boiler this year - I've bought one of those newspaer briquette makers but haven't tried it yet - they need to be fully dried out too.
1992 BX19 TGD estate 228K Rusty - SORNed
2002 C5 HDi SX estate
Top

Thanks for the LPG notes Mat.
I have discovered that there are some new rules introduced since those were made.

One is that a pipe must be added to vent the rear of the filler box to below the car- so I have that job to do.

I have discovered that I can force a 'gas only' start on mine. It will start on gas, then you must let it idle to warm up the 'boiler' before driving away gently.

Perhaps yours can do that too.

Yes, from memory it is something to do with pressing the gas/petrol switch with the ignition on, then turning the ignition off and starting the engine within a certain time. Not actually tried it yet though...

Funnily enough tonight's job was to run the gas pipe from the filler to the tank on the van. This is where the filler pipe emerges from the floor of the van - inside is a corrugated tube covering the gas pipe to the filler point. The idea being if there is any leak then it will be vented safely to atmosphere rather than building up in the van.

Ran the PVC coated liquid LPG line along one of the chassis rails...

I stopped at this point as I can't remember where I have left my pipe cutters - I have a feeling I've leant them out!

This is a switch that I've found with a symbol looking like a gas bottle on it, that I plan to use to turn the gas on and off with. I can also link it to the ignition circuit, so as soon as I start the engine it will cut the gas, to avoid any danger of leaving the fridge on whilst travelling. I've also got a (home made) LCD level gauge which will operate from the same switch, so that whenever that is on I can tell that the gas is on. The gauge also has an LED which flashes when the level is low - I will build this into the switch illumination.

I also managed to (very!) temporarily fasten the waste tank to the underneath but a bracket rethink is needed I reckon.

Productivity indeed Mat. I can only admire from a distance. I have all the get-up-and-go of moss these days.

The main things that are spurring me on are the lack of rain (surprisingly) and the lack of midges. The latter are an absolute nightmare here, but the fact that it's still early in the year, and hasn't rained for a couple of weeks means they aren't a problem yet.

Sometimes I wonder about the futility of it all, but then I think to myself that we might as well try and do the things that make us happy - for me one of those things is tinkering with (and using) old vehicles.

Midges!!! Hmmm. they don't like the sea. Not sure if that helps you though?

Midges! Once, when I was in Scotland the air was thick with them. We had to stay in and make sure all the windows were firmly shut - and they were swarming in their millions all over the panes, trying to get in. It was like a horror film. I'm sure all that would've been left of us if they had got in would have been a couple of dried out husks (well, the Ex. can talk for herself).
Top

mat_fenwick wrote: Sometimes I wonder about the futility of it all, but then I think to myself that we might as well try and do the things that make us happy - for me one of those things is tinkering with (and using) old vehicles.


I'm practising not reacting with anger to all the silly annoying things in life any more. There's just too many things to get angry with

Just seeing the word MIDGE has made me start to itch. Out of all the creatures in the world that man has made extinct, why oh why couldnt the little bugger midge have been one of them. I swell up like i've taken bloody steroids when they bite me, horrid things

These work a treat, but pricey. Not got one, but would like to, if we had the cash spare.

Tonight saw the gas lines in the van all installed and connected, and also a complete cock up. My elderly mower has been suffering from a weak spark so would misfire unless everything was in tip top condition. The last remaining part of the ignition system was the flywheel (containing the magnet to induce a current in the coil). I suspected it was weak so was on the hunt for a reasonably priced replacement. Despite the engine being over 40 years old new parts are still available, but a new flywheel was out of my league price wise.

I recently found a new old stock flywheel for the not too bad sum of £46 delivered. It arrived today and sure enough the magnet felt stronger. Imagine my annoyance then, when I dropped the bastard thing onto a concrete floor and cracked one of the fins off!

I think I'd like to know how it worked before shelling out that kind of cash! Pheromones and butane, eh? My favourite kind of barbecue... It'd give my meat a certain je ne sais quoi!

Edit: And around here it's not midges, it's people
Top

The van is now back on the road, with all the various new tanks remaining leak free! Weather here has taken a turn for the worse - for the past 3 weeks there's only been a few days without rain, so glad I got all the laying on the floor jobs out of the way when I did. Had an enjoyable evening on Thursday when I met up with Todd in the Shropshire hills - it's a lovely spot I've camped in a number of times now although it is definitely getting busier as it becomes more well known. I expect the day will come when they will put gates on it to prevent overnight parking, if somebody spoils it by leaving rubbish there etc. 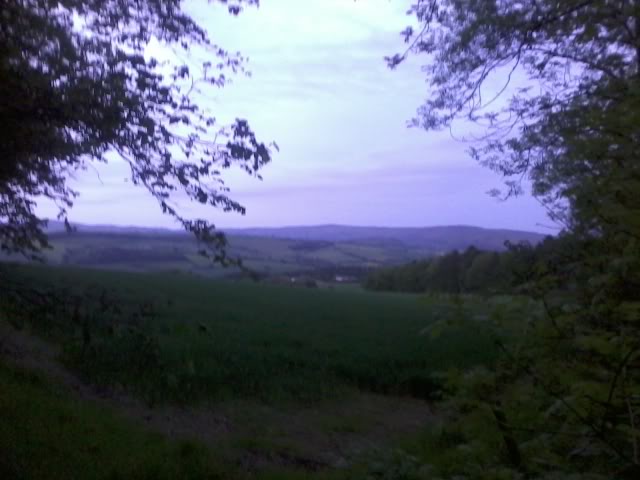 With the obligatory fire! 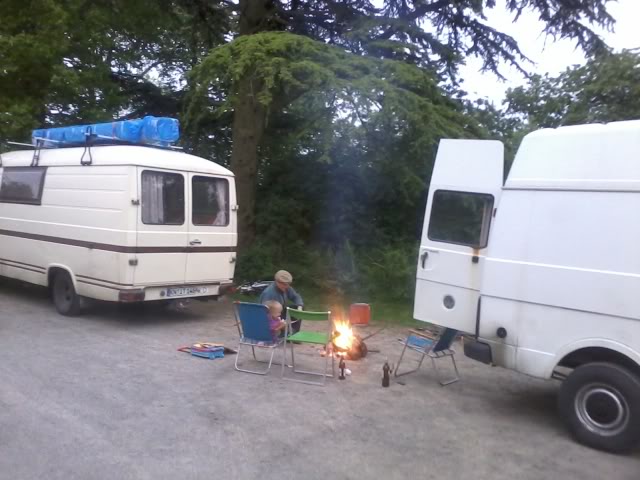 And entertainment provided by Todd & guitar 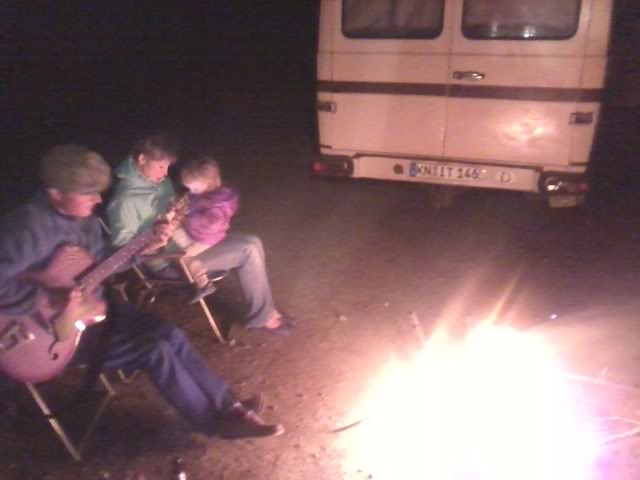 The BX is resting for a couple of months - there's one or two jobs I'll do but nothing desperate. The front end feels a bit 'loose', plus the brake hoses had an MOT advisory, and one handbrake cable has failed so I've been amassing parts to work on it. It will get new wishbones & bushes, ball joints, wheel bearings, brake hoses, handbrake cables and anti roll bar links. This is of course assuming the world doesn't end today, as has been predicted!

Twas a great night. Great to see you boss!

We made it slowly and 'safely' ( with interesting ever increasing play in the steering making it more like sailing than driving!) back home with the payload still on the roof - next time we might even cross the border into the badlands!
Todd


this yellow writing is really hard to read
Top
Messages: 1938