I passed through your town today. Bloomin' roadworks.
www.classichub.wordpress.com
Top

Tell me about it! Part of a big regeneration of the area - they're building a few mountain bike routes too.

This evening was mostly spent reassembling the front suspension (as much as I can until the rest of the bits arrive) and removing the old brake hoses. I hit a bit of a stumbling block, as I can't find my bag of pipe seals so will have to buy some before I can fit the new hoses.

Regeneration suggests it's run down, there is nothing there to run down?

Vanny wrote:Regeneration suggests it's run down, there is nothing there to run down?

I dunno. There are some big hills... (buddum tish!)
www.classichub.wordpress.com
Top

OK then, generation of the area!

Tonight's fail was to find out that of the 3 long driveshafts I have, 2 of them are knackered and the one that isn't needs a new outer gaiter. I've only got an inner one so will try and get one tomorrow. Still no ball joint or brake discs arrived

But I then noticed the intermediate bearing on the 'good' driveshaft span rather noisily. Fortunately, one of the others was perfect, so did a spot of mix 'n matching to get the best of all of them. Gaiter should be in tomorrow morning, so once that's in the front suspension work should be complete. 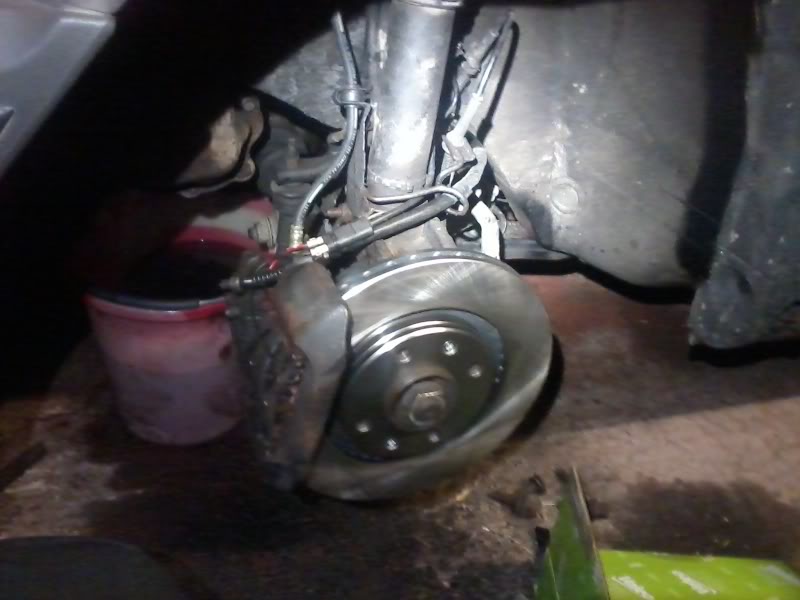 Doesn't look much different, but hopefully should drive differently!

Are those ventilated disks? Nice upgrade.

Yes, I've had them for the last 60k miles, so it was time for a set of new discs. Quite pleased to find Valeo discs for £10+VAT each, cheaper than most of the bargain basement stuff on eBay.

The front end is back together now, so moved my attention to the rear. The rear calipers were a little bit sticky, so cleaned them up and freed them off. Cracked open the bleed nipples too and will bleed them tomorrow if I can find a willing assistant. I wanted to sort out a small weep from the O/S rear suspension cylinder; when I too off the boot this is what I found: 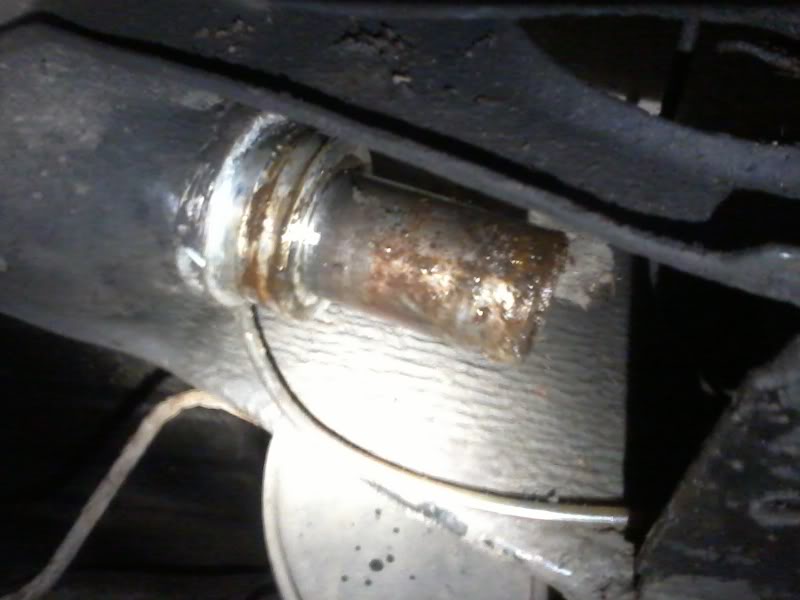 It seems like the boot has had a small split in it that I had not spotted (looks more like damage rather than age, as the rest is not perished). Water has got in and rusted the piston so it no longer seals fully. Fortunately I have a spare almost new cylinder assembly which I had kept when the rod snapped, so I'll pop the piston in tomorrow.

As for 'the willing assistant' to bleed the brakes, if Graham the horse won't help, I suggest a piece of wood jammed between the pedal and the seat ( not suggested in Haynes) - unless you can tell me a reason why not. It seemed to work ok for me.
I've been having rear calliper hell-hole : sheered off bleed nipples, sheered off through bolt that holds the pads..

Good work by the way, all those bumps and squeaks will be a thing of the past. Getting your 'bed' well sprung for the Classic Challenge eh?
Todd

I think it's about par for the course for the rear pad retaining bolt to snap if it hasn't been touched for a few years. Had no problems getting a pad fitting kit a couple of years ago over here so hopefully the same sausage side? Bleed nipple more of a problem - is there anything left to weld to? Never mind, I'm sure you can pinch one from your pink spares car.....

All back together now but one of the front calipers seems to be binding. Not checked whether it's connected with the handbrake cable or not but can't see why simply changing the discs and pads would cause an issue. I'll be collecting the front wheels later today so will be able to see whether it settles down after a test drive.

Spent yesterday afternoon putting in the uprights for a new shed (not for us although hopefully I'll get to use it...)

We *may* need to trim them down a little before putting a roof on!

and that includes the retaining bolt? Haven't seen such kits here, only the pads.
I actually drilled and tapped out the bleed screw holes but then considered it might not be accurate enough in depth for a complete seal. So I removed the rear calipers off the butchered TRD which were in remarkably good shape.
The 'pink' one you refer to is the one that I'm trying to repair! It will rool ok the highway again ( eventually).

This is what came in the kit, but only cost about £4. If you're struggling over there I'll bring one in May. Retaining bolt is M5 IIRC if that's all you need.

Would have thought the ally caliper would mould itself to the new bleed screw, but don't know for sure. Maybe an emergency only spare?

Ah yes, that's the stuff I need for the shafted calipers. Thanks for the offer - I'll let you know. I've soaked the salvaged - and complete - calipers in rust remover so if they are agreeable this afternoon then I'll be right.
The bleed screw seal is one I'm particularly conscious of after having a huge green fountain coming out of my re-built doseur because the bleed screw wasn't sealing properly ( a new one bought from Citroen!).
Todd

Bugger. Caliper still binding, and (new) reversing light switch not working. At least I assume it's the switch - before I laid it up the switch was not working but the lights would come on if I shorted the terminals. Now, they flashed on after a short delay when selecting reverse, but didn't the next time. Engine too hot to (comfortably) investigate further, plus it's already after midnight so calling it a day.

What a morning. I woke up to a little bit of snow on the ground, but had to take the BX rather than the Disco as the MOT is booked for today. The higher I get, the worse it got and very rapidly! 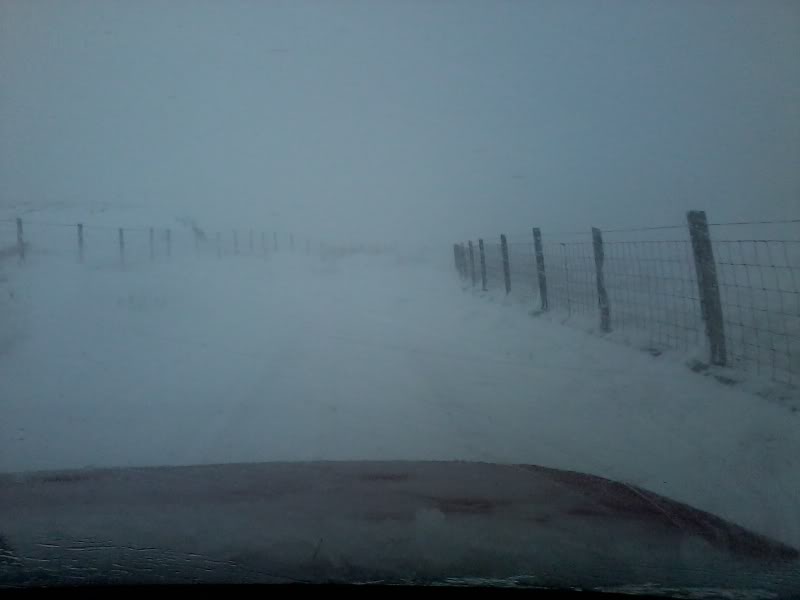 Not easy to see where the edge of the road is, so just trying to keep it inbetween the fences. 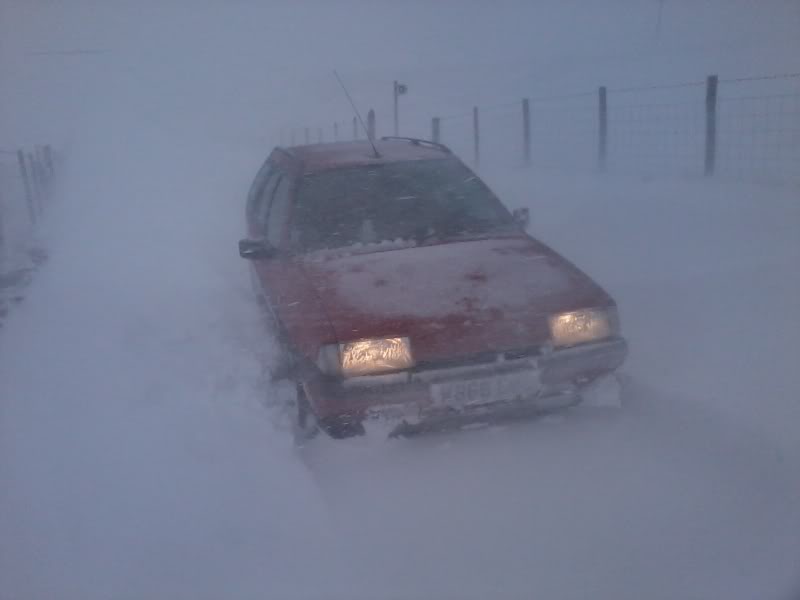 Stuck in a drift, so decided that it's time to put chains on. 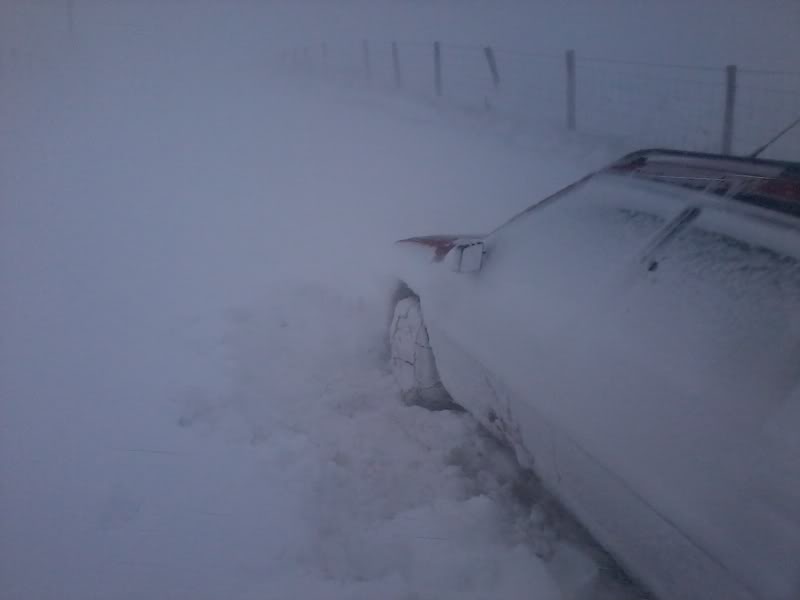 This is after about an hour and a half trying to put chains on, had to dig out around the tyre and then a link broke as I tried to drive away. Fortunately I had a spare link but still had to take them off and it was not easy replacing the link without a vice.

This is what I looked like afterwards, my damn hat kept slipping over my eyes due to the weight of the snow! Made it over the hills and down to the MOT station, but only after another link broke and I had to continue (very carefully) without chains. Fortunately downhill, otherwise I'd have probably struggled to make it.