195lb/ft of torque come in quite handy too...mind you if you catch it off boost fully loaded doing a hill start on a 1 in 4 hill it can be quite worrying! Fortunately peak torque is at something like 1600 rpm so I had better luck next attempt. The welding wasn't too tricky, not too many curves and as you say, lots of space to work in. Which was handy given the rain we get around here - meant I could do most of the work inside the van, in the dry. Are you tempted to try another engine? Such as a CX DTR Turbo 2 lump?


Tim Leech wrote:thougt they were more rust resistant than that!

Anyway, here are a few more photos of work in progress. 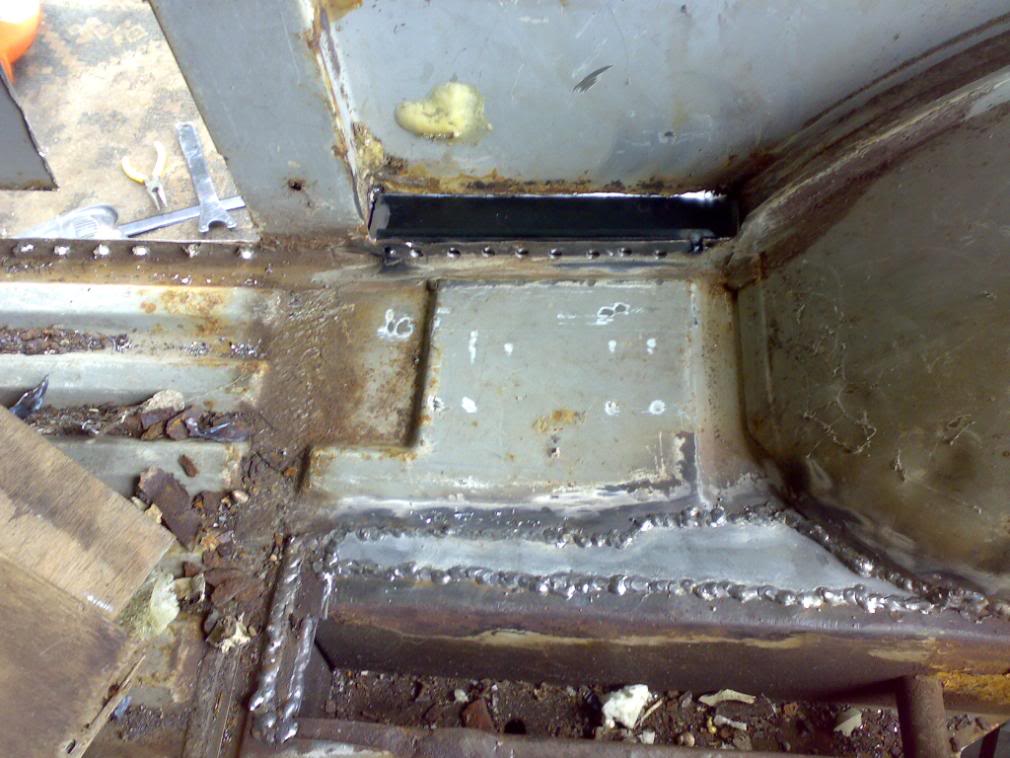 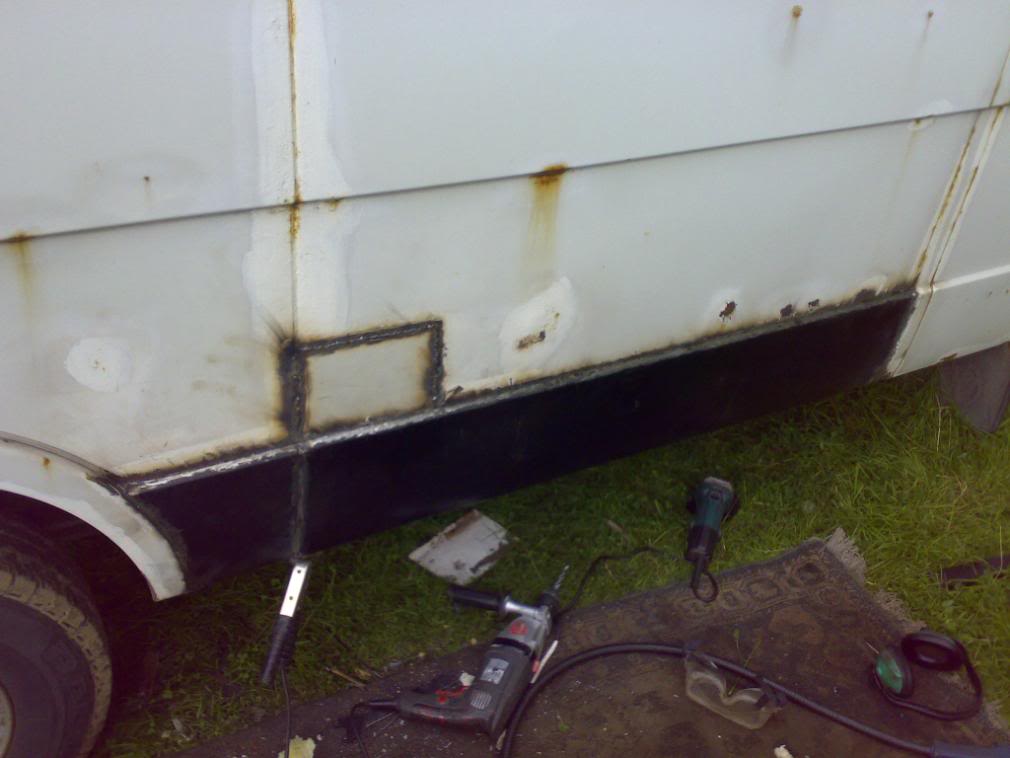 I was fortunate that once I had cut back to good metal, what was left was fairly thick. Which meant that I could butt weld in a new section with very little distortion. To be honest there is a little, but flat enough (given the rest of the van!) not to require anything more that a quick grind over and a lick of paint. 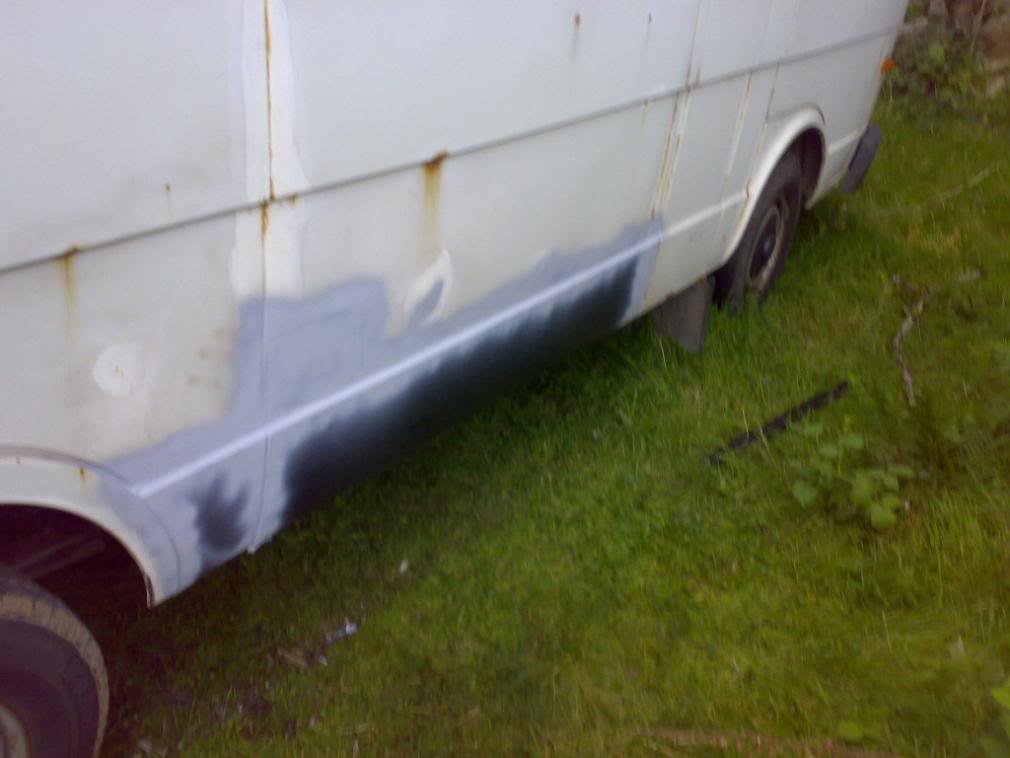 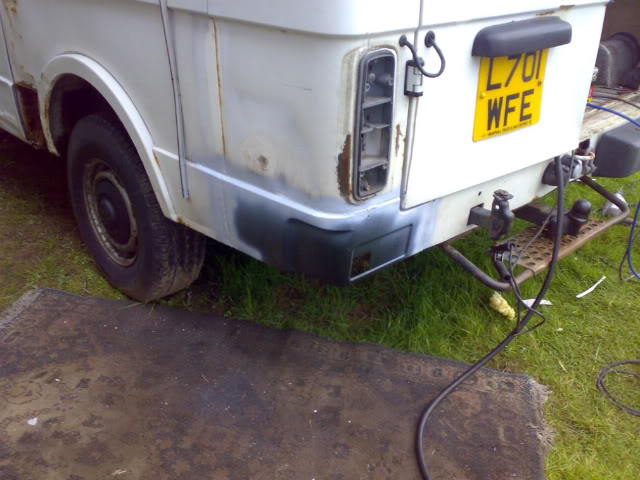 There's a bit of a story with this particular panel, the dealer local to me could only (after a 6 week wait) get hold of the offside version and told me that the nearside was unobtainable. By chance I happened to pop into a VW Van Centre in Birmingham who had one on the shelf, so I bought it there and then! 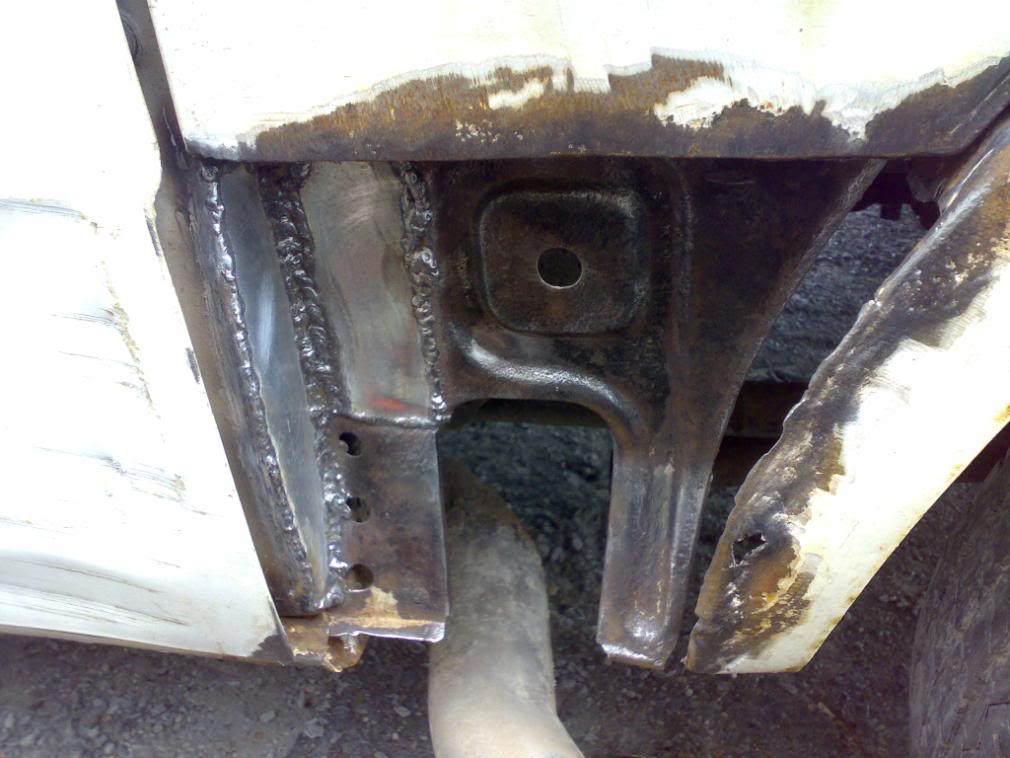 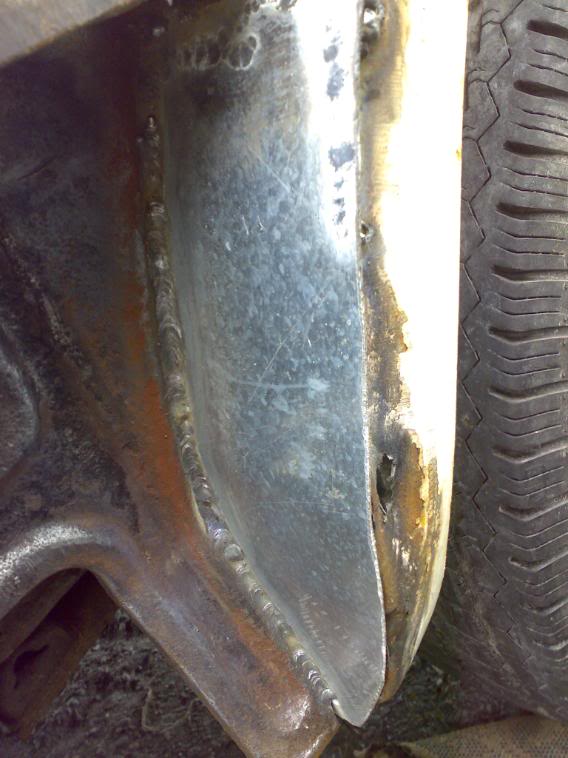 I alway use galvanised sheet for repairs, hopefully keep the rust at bay for a little longer... 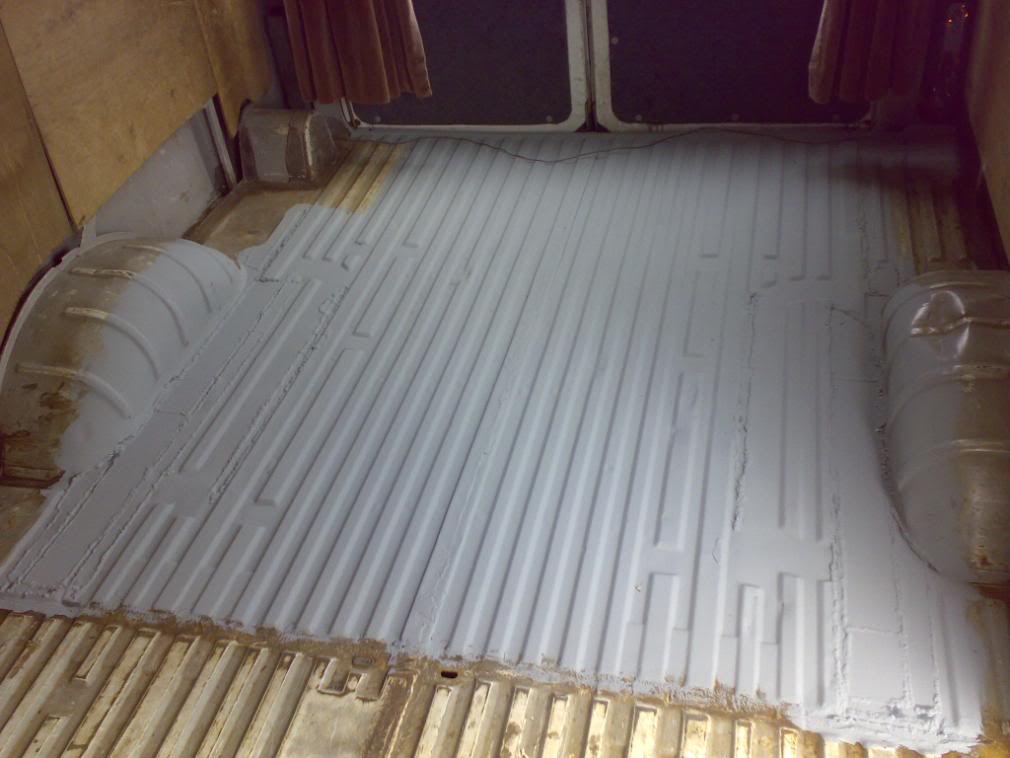 Feeling like I am on the home straight now! But I still had an interior to fit - the above photo was taken on the Wednesday night, and we were due to go away in it on Friday afternoon...

mat_fenwick wrote:I alway use galvanised sheet for repairs, hopefully keep the rust at bay for a little longer....

I trust you avoid the little floating fluffy bits of white powdery zinc? Inhaled they can be very seriously damaging to your health.

I know what you mean though. I also always use galvanised sheet where I can for repairs, except where it's a formed body panel of course.
this might be a signature
Top

Avoid them? No, I like to try and catch them on my tongue...

Seriously though, I wasn't always aware of the dangers of welding galvanised. Now I wouldn't do it in an enclosed space and would consider grinding away some of the zinc if there was a lot to be done.

Just got in from putting the mower back together after I (finally) got the engien started the weekend before last. The problem turned out to be the points, which although seemed OK with a 12V test lamp, were not switching the 200 or so volts from the magneto...
I've got to say that it's an absolute pleasure to work on quality engineering. Everything on it seems built to last without today's need to build everything down to a price. It's even got a balance shaft on the single cylinder engine! (Although perhaps a little over complicated - 4 drive belts, 3 chains, 3 oil filled bevel gearboxes and the main 5 speed gearbox...)

This Saturday I spent a bit of time working on the BX, playing with the boost and fuelling. Before I started I checked what boost I was currently getting, and it was 0.6bar, a little on the low side really - perhaps the spring in the actuator had gone soft with age...
It's now running about 1.1bar, and performance is much improved!

I've wound out the max fuelling screw, rotated the fuelling control cone under the diaphragm, and also removed the spacer so that the cone can travel further under boost. Obviously there is a bit of smoke now under full load, but not too bad (viewed from the driver's seat anyway).

There speaks a man with the holy grail of a bosch pump!

I like the welding you've got going on as well! Very neat by all accounts....you b@$tard! I need more practice, luckily I have a Morris, a Triumph and two BXs to practice on!!!!!!!!!

You're more than welcome to come practice on the bus if you're bored mate!
Smokes lots, because enough's enough already!

If you mean that and trust me then I'm game mate. Just don't blame me if the the rear axle overtakes the front one at some point!!!

docchevron1472 wrote:You're more than welcome to come practice on the bus if you're bored mate!

Sounds like a plan for a mini BX meet - all pile round Docs with some ale and some welding gear and plug away at the bus. Sounds like a H&S 'mare - my kinda weekend

Thanks for the welding compliments Mr Bandit! I've got to say the idea of a mini meet round Doc's sounds like fun, welding by day and biscuits with hot cocoa in the evening (OK, well maybe a couple of

) Whaddya fink Chris?
My engine hasn't exploded yet, but presumably by sheer coincidence the starter seems to be on its way out. Very slow to turn, even when hot although the battery is fine. I spotted one on eBay (brand new Bosch) starting at £39.99, with a Buy It Now for £39.99, hmmm, decision time

After I had bought it I spotted this post. Oh well...

mat_fenwick wrote:the starter seems to be on its way out. Very slow to turn, even when hot although the battery is fine.

Have you tried shorting the solenoid out with a fat screwdriver? As often happens, the contacts in the solenoid can get a bit high resistance, so the starter goes lazy. Short out the contacts and it buzzes round like mad.

Maybe I shouldn't have mentioned that given that you've already bought a replacement....
this might be a signature
Top

Well, the starting problem turned out to be a high resistance earth lead, which I have now remade. It spins over a treat now, as it should with a new starter (that I didn't need) Anyone after a spare?

I didn't think of trying the trick of bridging the solenoid terminals, but will bear it in mind in future...I jumped to the (wrong) conclusion that it was the starter almost straight away, especially after wiring the starter directly to the battery with jump leads didn't help. I seem to be having bad luck with starters recently - this is the 5th in the last 18 months! First was the original one from the 1.7 engine (very slow to start but gradually speeded up), replaced by the Xantia starter. Followed by the one on my mate's excavator, which had siezed following a few years sitting idle. Managed to get that goiing again with a quick stripdown. Then there was my wife's Megane - that was fun to change, buried between the rack and the exhaust manifold, only accessible from below. About a month ago the one on the 205 seized, and as you have to take the radiator out to change it, and a new one was only £30, I didn't bother with a rebuild. Lastly I had the problem with the earth lead...

I've taken a couple of days off from work to try and finish the kitchen before Christmas, all the plumbing and most of the painting is done, but today I got sidetracked with doing an oilchange on the BX, and swapping the glowplugs. I was a little put off by sound of changing the glowplugs on a Xantia engine, but it was pretty simple really. It would have been a bit trickier if the one behind the pump rounded off, but they all came out easily. Maybe I just have girly hands?

I've also changed the waterpump on the 205, as that started to leak. (I don't think it wants to be sold!) That took me almost a full day! There's not too much room for anything down the cambelt end of the engine, but with much swearing and cut hands I managed it. I also found that XUD manifold to exhaust bolts make ideal camshaft timing pins for the 16v engine...very handy.

Had a problem with the BX yesterday - going up a longish hill, turbo was just spinning up when I heard a pop, followed by a whoosh from the turbo. Bugger. The pipe from the turbo had either come off, or burst (unlikely), I thought.
Turned out the pipe had slipped off the turbo stub, not especially easy access. But I can now report that it is possible to do the job with nothing more than a Swiss Army knife (with screwdriver) and the torch on my phone...took about 2 hours and my arms are cut to shreds though. If I had any tools with me I would definately recommend tilting the engine and/or removing the intercooler.

Welllll, I could have, but it would have been far less fun!

Actually I did drive it a short distance, to somewhere safe, and it was driveable (but very noisy above 2000rpm!) But I was about 25 miles away from home, and I didn't want the engine sucking in any unfiltered air while deaccelerating. Plus it wasn't raining, which was a definate bonus, and the residual heat from the engine kept me warm even though it was frosty.