Here's what was hidden by the screen trim:

Not sure whether I'll get away without any welding required - I'll have to see how deep the pitting is when I get the angle grinder out. My trusty Makita failed at the weekend, so I've borrowed a cheapo grinder until I can repair that (I suspect just new brushes needed).

I've given part of it a quick wire brushing, but before I go any further thought I would try out some supposed rust remover (rather than converter). I'm sceptical of any method other than physical removal of rust, but thought I'd give some a try as it's always difficult to remove the rust at the bottom of pits.

The idea is you put it on as a thick layer of gel, and then leave for a day or so.

Given that I had removed any flaking rust, I cleaned off the gel after leaving it overnight. It's a poor photo, but I can see no trace of rust underneath where it was. The black areas are paint that I have not yet removed.

I'm actually quite (reluctantly!) impressed, so will probably be using it on the rest of the screen surround once I've got rid of the flaky stuff. Will try and get some more photos, of a better quality

I might try the cling film, but on my trial section it didn't dry out overnight (maybe if we had some hot dry weather…?) I'm just a bit worried about making the gel layer too thin on corners if I wrapped in cling film.

Do you have problems with rust forming after you wash the stuff off? I've yet to try it but am concerned about bringing water anywhere near a newly shiny steel surface!

Silver BX now with 13 months MOT - it went straight through this morning with no advisories. I dropped it off at the MOT centre last night, and had the first proper test run on the way. It drove extremely well, apart from the clutch needing adjustment. I think one of the front brakes might be binding slightly, so will need to look at that too.

- let's hope that mine was PAYING ATTENTION to that ...
Diagonally parked in a parallel universe
1991 TZD hatch (Triton Green)
1992 Hurricane
Top

Red BX update time - last week I noticed I had a split in the (new in April) offside CV boot. I seem to be spending more and more time replacing recently fitted parts, which is rather annoying.

When I fitted the last boot they didn't list the BX in the Motaquip catalogue, so I had to match up the dimensions and fit what was nearest in size. Comparing the new and old boot the new one (Driveline) was noticeably thicker rubber, and seemed to fit well. The old one felt extremely soft, and it looks like what has happened is that it may have been slightly too big, and although not touching anything when stationary it has ballooned out when rotating and worn away.

First impressions are good, so I may get a couple of the same boots, and keep them in stock. Also treated myself to a new scissor action ball joint splitter, to lessen the risk of damaging the ball joint boots when splitting them. It worked pretty well, although less satisfying without a hammer to hit...

My exciting Friday night was spent treating the rust around the windscreen on the Discovery. I wire brushed away any flaking rust, leaving the pitted surface remaining. I then tried my new Deox gel, and spread a thick layer all over it. The next few days will tell whether it removes what's left of the rust.

It does look unfortunately like someone's masturbated an elephant all over the car now.

"someone", rather than just the elephant solo?
Martin

Well, everyone knows that elephants don't have hands! Although what they could achieve with their trunks is anyone's guess...

Just got back from Sheffield, and popped up to the workshop to have a look at the rust removal process. After cleaning off the gel (which had turned green) I was left with this:

There is still some rust remaining, in areas where the gel had dried out but on the whole is looking good. I put on another coat, so will see what it looks like tomorrow. The instructions say that coats are sometimes required, and the pitting was fairly deep so I'm not that surprised.

In other news, my Dad gave me a trailer when we were over there yesterday! 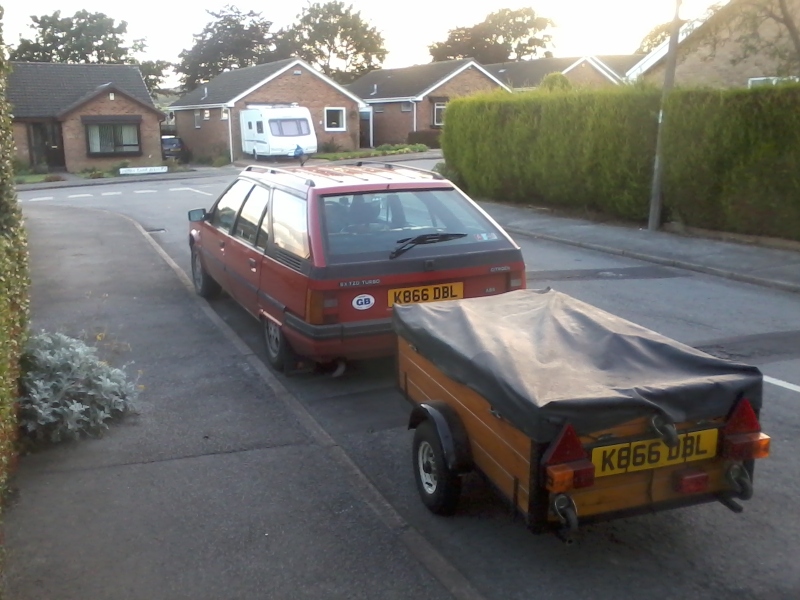 I repaired it for him about 20 years ago (bent chassis) and he's barely used it since, so he said I might as well have it. It's not been used for 10 years, so he put a set of new tyres on it (including the spare. Bonus! I was pleased to find that the wiring I did back then all worked first time, and nothing fell off on the way back

I bet Lana was a bit draughty on the way home.

Loving the castors on the back,I'm guessing so you can store it on its end or you could attatch a sail to the tow hitch and...... Nah I guess not
1991 BX Meteor 1.6

light travels faster than sound, thats why you look intelligent and then you spoil it all by opening your mouth !!!!!
Top
Messages: 1938