Anything about BXs
Messages: 36

Found this pic on the internet, which is allegedly a prototype BX with a GS body:

Most interesting, although more info would have been nice... Note the panel between the back door and the third window to accomodate the BX's longer wheelbase. A quick check indicates that the BX wheelbase is 95mm longer, so that does seem to fit.
"Boring damned people. All over the earth. Propagating more boring damned people. What a horror show. The earth swarmed with them." -Charles Bukowski
Top

You would have thought that after all that hard work they could have ordered a bigger bit of glass to negate the need for the little panel which gives the game away...

Just think, the potential for an XUD powered G! The ultimate car?

I like that panel - it's a sort of CX-ish feature. Looking at the pic, one can really see how the BX evolved from the GS, whereas at first glance it would appear to be completely new.
• 1992 Citroen BX TZD Turbo Hurricane
• 2006 Xsara Picasso 1.6 16v
Top

Now you mention it, the panel does give it a pleasing CX-like affect. It is remarkable how the extra length gives it more, I dunno, presence?

I don't suppose anyone clever with photoshop would be able to mess about to better see what is inside the front wheelarch to see whether macpherson struts are at play; there is something which does look strut-like almost visible...
"Boring damned people. All over the earth. Propagating more boring damned people. What a horror show. The earth swarmed with them." -Charles Bukowski
Top

This is the best I can do - there's nothing much to work with... 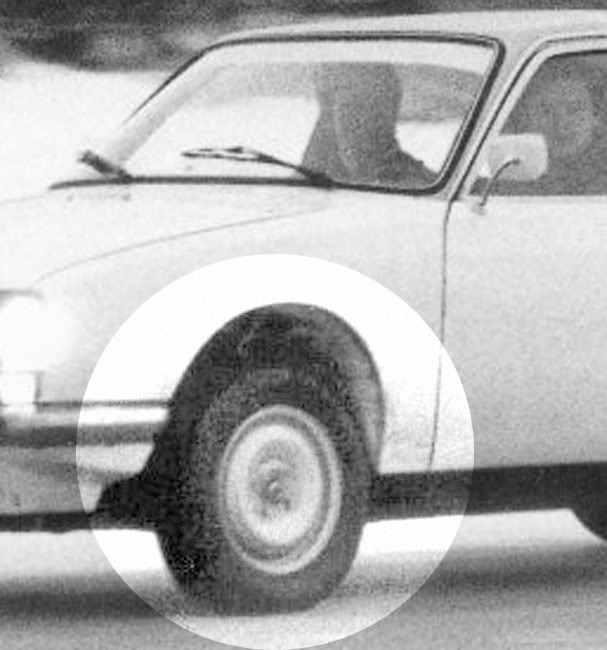 It does appear to have BX 4 stud hubs so I think possibly has the BX subframes fitted there.

Hmm, still inconclusive, but it does look as if the visible object *could* be a strut.

Also, as Graham says, they do look like 4 stud wheels, so perhaps the BX subframe and suspension is fitted...

It is interesting if already at this point the decision had been made to go to strut-type suspension, I guess right from the off the decision must have been made to share components with Peugeot. The GS used looks to have features that would date it to '76-'78ish which I guess dates it, although I suppose being a bitsa the parts fitted would not necessarily be current.
"Boring damned people. All over the earth. Propagating more boring damned people. What a horror show. The earth swarmed with them." -Charles Bukowski
Top

jonathan_dyane wrote:The GS used looks to have features that would date it to '76-'78ish which I guess dates it, although I suppose being a bitsa the parts fitted would not necessarily be current.

True, but I'm still surprised it's a GS body rather than a GSA one... no?
Top

jonathan_dyane wrote:The GS used looks to have features that would date it to '76-'78ish which I guess dates it, although I suppose being a bitsa the parts fitted would not necessarily be current.

True, but I'm still surprised it's a GS body rather than a GSA one... no?

Yes, and no. The GSA didn't come out until 1980, whereas the BX was launched in 1983. I guess development of what would become the BX would have been well in hand in 1979.
"Boring damned people. All over the earth. Propagating more boring damned people. What a horror show. The earth swarmed with them." -Charles Bukowski
Top

I recall this at the time in Car magazine as a scoop in the Headlines news
intro pages. This Gs is a kinda Prestige lwb!

Should have had longer rear doors too!

Certainly the squared apron and different wheels do point to a mule with
different/newer prototype running gear. It's been done since as the Xm running gear was set up as a running prototype on a CX bodyshell running
a V6; now that'd be an interesting prospect but again it used McStruts
instead of the originals' double wishbones - almost but not quite the car the
CX could and should have been from the outset or at least been if better
developed later down the line.

Sorry - bit off topic, but was the CX designed originally to have a dual rotor Wankel engine and, as such, was not able to take bigger than a 4-cyl engine that eventually curtailed its appeal as an executive car?

I think you're right - there was the Wankel idea, and I seem to remember reading something about an aircooled in-line flat six design? Imagine....

The most significant aspect of that meant that it should also have had a transaxle style gearbox and inboard brakes, just like the G-series. Because of this, the engine bay was designed for a short longitudinal flat engine with a large subframe around the gearbox.

As it happened, the old DS/Traction engine was used, mounted transversely, leaning forward, with an end-on gearbox. Because the car now had a transverse watercooled engine instead of a longitudinal aircooled one, the engine/gearbox is shoehorned in, meaning rubbish access, and a plethora of fairly crude engineering to make it all work (things like engine mountings, gearbox location and handbrake are all really badly engineered on the CX)

The Wankel arrangement came about as a Wankel engine is fairly similar in shape to a flat engine: it has a short crankshaft, but is fairly wide. This meant that in the original layout for the CX, (a flat-six and transaxle gearbox), a Wankel would have fitted perfectly. An oddiy now is that as the Wankel-engined G-series cars used a front subframe from a CX, they are the only car to have a CX subframe with the gearbox in the place it was designed.

Looking at that G-series mule car.... is that the sump from an XU I see just fractionally poking out under the front?
this might be a signature
Top

I wondered if I could see a BX style rear silencer poking out the back.

I just read that the DS was also initially penned with a flat six-cylinder aircooled engine:

"Walter Becchia was the man responsible for the 2 CV's flat twin and it was he who was given the task of developing a new engine. He designed a water cooled flat six of 1 806cc capacity producing 63,8 bhp @ 4 500 rpm. In 1948 following successful trials of the 2 CV's engine, the flat six was converted to air cooling although all else remained unchanged including power output which was adjudged to be too low. The project was abandoned in 1954 due to lack of power, excessive thirst and great weight despite the widespread use of aluminium. The flat six would have been mounted ahead of the front axle as in the 2 CV." 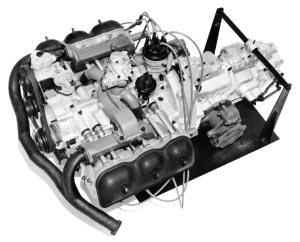