Hi folks, been reading this board since cavmad from retro rides pointed me in this direction. Decieded to sign up and show you some pics of the 16v trackday special i'm currentley building.
It started of as a £300 banger i bought of ebay last year so i caould pull my mk3 cortina off the road for a rebuild.
This is how it looked when i got it.

I ran it around like this for almost a year untill i got fed up with it breaking down and decieded to get smething a little bit more reliable.
I couldnt bring myself to part with the citroen though and knowing that my cortina would probably be at least another year before being finished i deciede to make a cheap toy out of the citroen.
First i repaird the cracks in the front bumper and had to do a spot of welding to the o/s inner wing as the car had been in a shunt at some time and had been repaired quite badly.
After that i stripped all the interior out and used it as a work hack/playtoy untill the mot ran out.

Once the mot ran out i decieded to pull the engine out and replace the clutch. while i had the car in bits i bought a head gasket set and ended up completley rebuilding the top end and doing a little bit of port matching on the inlet manifold and throttle body.
I also stripped all the sound deadening forom the bulkhead and moved the battery to the boot. 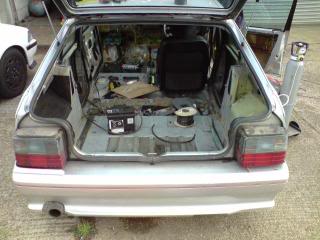 After this i took the car for an mot which it sailed through no problems.
Then i welded up the sunroof and gave it a quick coat of paint before RWYB at the pod this weekend where i managed a 15.5, a 15.7 and 16.4 after trying to launch in second to avoid wheelspin

The cars done over 300 miles this weekend plus all the abuse at the pod and apart from a split bottom hose it hasnt missed a beat. Not bad considering it owes me less than £500 in total.
I've got my first track day coming up in october and i'm hoping to get all the windows replaced with polycarb, move the rad and lhm tank into the back, lose a bit more wieght out of the shell and i might even make a start on the rollcage if theres time.
If anyones got any info on race prepped citroens or any pics i'd be very interested.
Thanks Rich.
Top

Some pretty decent times there... I think you will have a lot of fun in this car.

The funny thing is, I was actually considering going to Santa Pod this weekend, as I only live a few miles away... Wish I had now

If you're ever looking to shed some more weight by losing the bodykit off it, I know someone who'll give it a good home

It wont be long before i'm back up there again. I reckon with some decent tyres and a few suspension mods i can get it in the 14's.
I did consider shedding the bodykit but if i recall rightly they can be a right pig to get off without damaging them, I also quite like the look of it

Excellent. I noticed you were selling stripped out bits on eBay. And you're local-ish to me. Shame I don't have a suitable BX to put them in

I had toyed with the idea of creating a BX trackday car. Although I have shifted that aim to creating an endurance cross-continent charity event BX (well, hopefully!), I will follow this thread keenly. Well done.
• 1992 Citroen BX TZD Turbo Hurricane
• 2006 Xsara Picasso 1.6 16v
Top

All those ebay bits have just gone to a 0 feedback bidder for £54. Something tells me i havent seen the back of them yet.
Top

To be fair the bodykit doesn't weigh much, and as you rightly say can be a pig to get off, so the only real advantage would be if you didn't want people to know it was a 16v... Which might surprise a few people on a trackday

But, the front and rear bumpers are easy enough to change, and they do weigh a lot more than standard BX ones, so maybe you could save a bit of weight there?

About those eBay bits... You never know, I had zero feedback when I bought my first 16v interior 6 months ago. Maybe they're going to a first time 'genuine' ebayer... although your suspicions are probably correct.
Top

Well its been over 24 hours and i still havent heard back from him so looks like i still own it all.
I might stick it up on here, i'll take £100 for the lot.
Was talking to a mate today about painting the BX hearing aid biege and running it on banded steels for proper sleeper look

Heres a little vid from the other night, i'm having a few problems getting traction

And yes, thats me crunching it into reverse. Things like that always happen when someone points a camera at me

I've never heard a BX that sounds like that before. It does sound like it's struggling to put it's power down too. I would guess stiffer spheres all round and a decent set of tyres would sort that out...

If you do want a pair of standard bumpers, I have a pair you can have next time you are up at Santa Pod? They are dark grey, and came off a 14TGE, so not even got the cut-outs for the front fogs. Both of them together probably weigh about half that of the front bumper alone.

The idea of beige with steelies on is brilliant... I always considered something similar for the road. Good for catching out 320Ds on the commute to work

Rev. Dick Deluxe wrote:Well its been over 24 hours and i still havent heard back from him so looks like i still own it all.
I might stick it up on here, i'll take £100 for the lot.
Was talking to a mate today about painting the BX hearing aid biege and running it on banded steels for proper sleeper look

Theres nowt wrong with hearing aid beige, and the official colour is Ivory

Thats great, i'll definatley take you up on those bumpers. Dont know when i'm next at the pod though.

Rev. Dick Deluxe wrote:Thats great, i'll definatley take you up on those bumpers. Dont know when i'm next at the pod though.

Well, they aren't going anywhere... So don't worry about it.

Would be nice to get back up there sometime anyway... Haven't been since the middle of last year, before I even passed my driving test. I've always been relegated to watching from the grandstand at RWYB