Update on the club's most troublesome valver

Update on the club's most troublesome valver

First pics of it's return, taken at the Gosporteer show a couple of weeks ago. Spy th Tiv in the background, next to my g/f's dad's Tiv and the dodgey looking MG next to the BX! 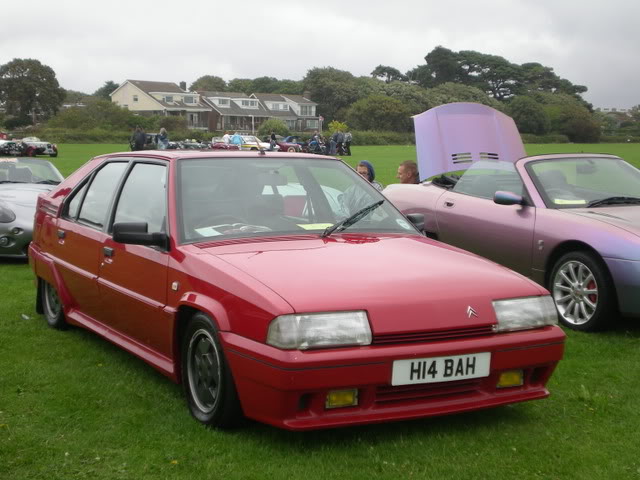 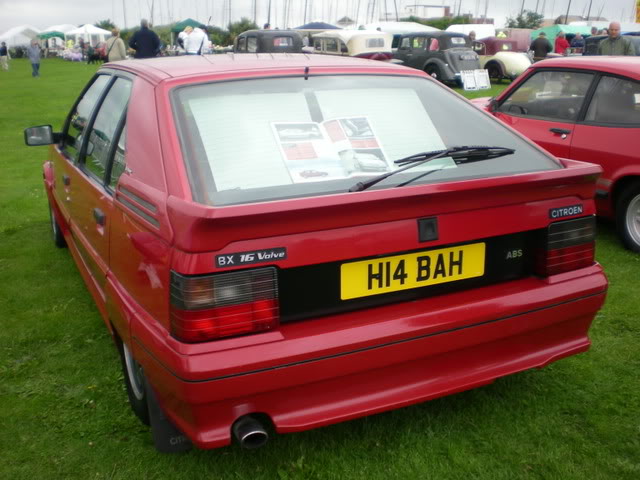 Even took it seriously enough to put literature in the windows 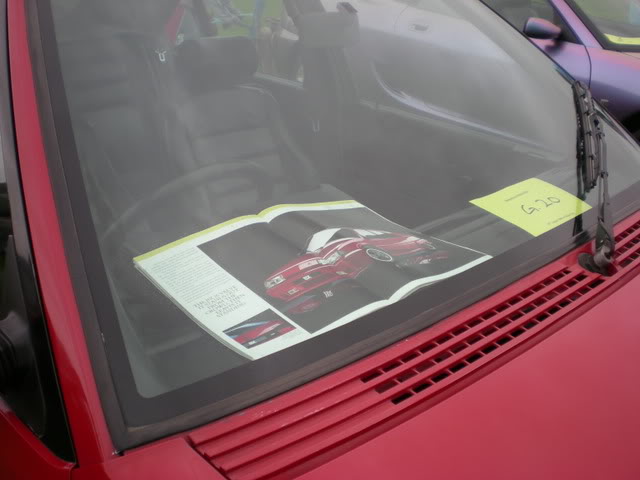 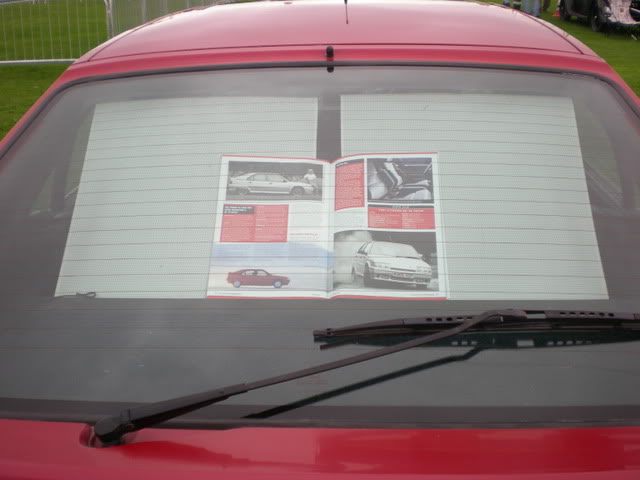 And the moneygrabbers at the back: 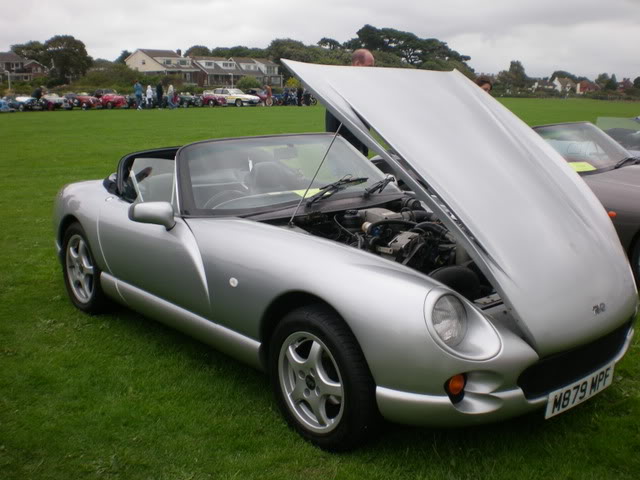 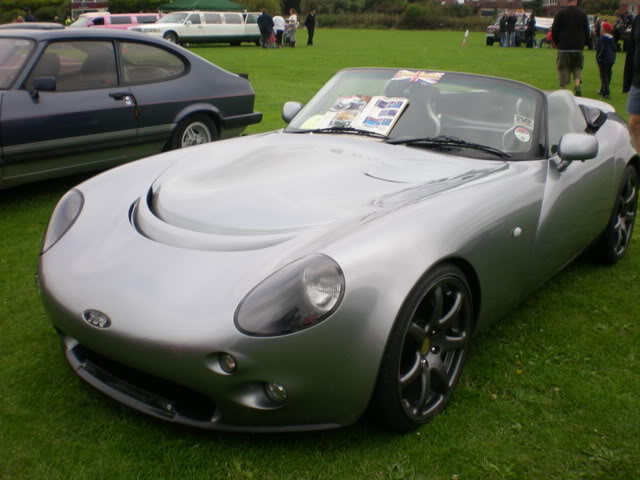 I'm really enjoying having it back, although there is still work to be done on the engine. The slapping valve is getting louder, and there is something loose, somewhere! It rattles it's nuts off at low revs. And apart from the constant hissing, it's running ok

Good on you Kitch! Glad you're getting back into it. It's looking good too

That is one fine looking valver!

I guess it must be nice driving it after it's been off the road for so long... Even if it isn't quite right just yet.

Those yellow fogs, and clear side repeaters are giving me ideas

Yeah it's always looked alright, although its much worse up close. Most panels are dented, either due to the age or me losing my temper with it! The paint's gone cloudy on the bonnet and faded on the spoiler, but luckily the camera never picks it up.

Fogs aren't original. I bought some yellow glass paint! Was only a couple of quid, but it is wearing off. Proper yellow ones do exsist, but I've yet to grab some. Clear repeaters are everywhere....ebay, tuning mags etc. I used to switch opinions between them and standard, as these have the orange lens inside which looks a bit cheap, but overall I think it works. Your's already looks crackin anyway Matt! Best lookin BX I've seen on a recovery truck

Well, I still think it looks good... I think having a nice shiny set of Speedlines always sets them off nicely, but the rims do have to be shiny, or else they just look unpleasant.

I'd say that my car really does have a dent in every panel, and the drivers door is shagged (Rusty, dented and rippled), there are scratches all over the place... But none of these were done by me

Okay, maybe I did reverse into my neighbours house once... but lets just say that fitting fibreglass bumpers has made me extra careful manoeuvring!

To be honest, regarding the fogs, that was all I was going to do

...And one possible solution to the clear side repeaters is to buy some chrome repeater bulbs... Just a thought?

It's not the best I've seen on a recovery truck... This one used to brake down a lot... Usually partway through a trackday, or on one occasion on the way to a trackday

The chrome bulbs won't work on the repeaters, as the repeaters themselves have a domed orange lens built in. You could break it out, but don't knwo how successful that would be.
The national BX register - click to submit a car!

Kitch, did you ever sort the power steering??
Over and out from me
Top

Ian where have you been mate!, that was sorted last month, Im surprised you didnt see Kitchs smile from here!.
Top

Phil: I'm assuming you mean are they two different models of TVR, as I'd be worried if you weren't sure of the differences between a silver car with little silver wheels and a number plate, and a grey car with big anthracite wheels, no plate and different badges, lights etc

Mine's a Chimaera, a sort of GT version of the Griffith of the early 90's. TVR's best selling car, with around 9000 cars being produced. That and the Griffith were TVR's glory years, with simple Rover V8's (that sound louder than they go) brilliant styling for the era and brutal 0-60 times.
(The bit of styling around the front indicators isn't deliberate....TVR always mould their cars from clay rather than sketch them. The director's (Peter Wheeler) bit a chunk from the front and they left it on the mould!

The grey one's a Tamora, one of the later cars made after the Tuscan where the Director of TVR decided he wanted his own engine in the cars, otherwise it's just a kit car apparently! And again, apparently, a British sportscar should have a straight six, so they developed a Spped Six engine with over 350bhp for the Tuscan...the lairiest TVR made. later, they introduced a softened version called the Tamora, with easier handling and a slight de-tune. It was a bit easier to drive, and as designed to rival Boxsters. But the looks weren't everyone's cup of tea (the back isn't a work of art) and people didn't want to spend everyday german sportscar money on unreliable British fibreglass coffins. So they only made 362 (IIRC). Silly fast though, that particular car has taken a De Tomaso Pantera with ease, a Lambo Countach and a Ferrari 360.


Ian: Yes mate, a combination of mis-diagnosed faults sent me up the longest garden path ever until recently, where with the aid of the ever legendary Doc, the problem was worked out and solved!

Tim: I never smile.
The national BX register - click to submit a car!

Kitch wrote:Phil: I'm assuming you mean are they two different models of TVR, as I'd be worried if you weren't sure of the differences between a silver car with little silver wheels and a number plate, and a grey car with big anthracite wheels, no plate and different badges, lights etc

So what was the problem with it then Kitch???
Over and out from me
Top

Roverman wrote:Ian where have you been mate!, that was sorted last month, Im surprised you didnt see Kitchs smile from here!.

I cant keep up with this forum, i need to go out less

Basically it was a worn pump causing intermittant PAS loss which prompted me to think it had a dirty system and put hydraflush in, which picked up all the crap in the system and blocked the pinion with it, which caused the FDV to fail with the pressure build-up. So when the engine was broken by me, I tried a new pump and FDV not knowing all this, expecting results but of the course the pinion was still stuffed and was stuffing each FDV I bolted in.

So.....I fitted a new ram and pinion along with a new rack. But still no PAS. Why? Because the FDV was still shafted from the previous attempt.

So....fit a new FDV last, having changed everything else in the system and happy days!
The national BX register - click to submit a car!