I've reached a bit of a crossroads with the ole yellow BX. Now I know why there's no Mk.1 Breaks left! Over the last two years I've done a lot of work on it but now it needs a lot more for its upcoming TÜV test. Actually it probably needs a lot more beyond that to keep it alive. Question is : do I do the work just to keep it on the road, or take it off the road and do everything that needs doing to ensure its long term survival? I've got no intention of selling it.

The silver TRD is the one next closest to the road but it requires head gasket and various small things before its TÜV ( for which I'll have to scrounge up trade plates to get it there) though the condition of most of it is outstanding, having only covered 42000 miles since 1985. It's just an unknown quantity having sat for two years ( and being started every month) and I've only got a few weeks to do it during which I'm also very busy with gigs around Xmas, and it's perishing cold in the barn.

One more thing that the yellow one has in its favour was the diesel Catalyser that I fitted at considerable expense to cut the absurdly high road tax for old diesels. The cost of fitting it was immediately paid for with the rebate from the tax office! I think it's maybe the only Diesel BX with a Cat.

The absence of a Cat on the silver machine has delayed its return to the road but now I've bought another new one for a fraction of the original price ( blessed are the people who order things and never collect them!) from a garage. But what a palavar to install then a TÜV verification test followed by two offices and indecipherable paperwork. Anyway, mustn't grumble, must just get on with it all!

Not looking for any magic answers just wanted to vent my BX filled brain before deciding what to do! 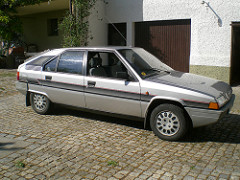 Get the lovely silver ones head fixed and press that into daily service and then take the yellow peril off of the road to give t the love and care it needs maybe? I definatly wouldnt sell the silver one as its so rare.
Lots of Motors, mostly semi broken....
Top

Love, cherish and cosset the yellow one, throw huge obscene amounts of money at it, and revel in the knowlege that you have something truly unique - and run the TuRD in the meantime.
Top

If you intend to keep the yellolw beast longterm then the answer is a simple one.
pull the yellow one off, and like Marty said, spend your newborns inheritance on it! (Well, paraphrasing a tad, but you get the idea!).
Oh, congrats on the littlelun BTW.

Get the Silver one going for now and restore the yellow machine to it's former greatness..
Thats what I'd do anyway.
Smokes lots, because enough's enough already!

And get some heating in the barn

Well, thanks for the replies fellas! I actually made a good start on the head gasket today til my feet turned into ice bergs ( unfortunately heating the barn would be like heating the sky as it's so draughty) but that's decided it.
The condition of the silver one is very good - the engine bay is unbelievably clean for an old diesel- it makes me work very carefully. Though I did originally buy it - cheap and unseen - as a parts donor I have resisted robbing it for parts for the last years and I'm glad I did.

The yellow one has become a builders/furniture/band van come dog-box and deserves better.


spend your newborns inheritance on it!

she's already collected €120 in donations from the relatives though the wife's keeping that away from oily fingers!

Without wanting to jump on the bandwagon...I think that you're doing the right thing. If you have to use a car daily, then it's almost impossible to carry out major work AND do a good job.
Good luck with the head gasket on the TRD, some may think it's a shame to use it as a winter hack but everything is repairable if it wears out/breaks/rusts!

Thanks Mat. It was actually a novelty to jack up a BX today and the sill not collapse into a rusty mush! Though it will be a 'winter hack' it will be in the barn overnight and I won't be carrying any building materials - the trailer will eat shit from now on!
Todd

While the snow piled up here on Saturday I removed the head which I'm taking today for skimming. That should hopefully all be back together by the end of the week though -5 in the barn is quite a challenge.

Next up will be Catalyser installation, new alternator and getting the bonnet back into shape -

The original metal bonnet got front ended by the previous owner and has pushed the nose out of form as well as leaving a couple of small dents and cracks there. Question is, do I repair this or mount the completely new bonnet I've got - this is metal and in original primer but I'd have to paint the whole thing rather than the areas mentioned on the original one, though they would of course need filling, smoothing etc. And how would I get the paint to match if I repair and spray the original one?

Also, I need a few tips on how best to prepare and spray, if possible using general product descriptions rather than brand names as everything is different here.

just a thought........
Good idea to press the silver bx into service,time for it to come back on the road! but it may be worth keeping the yellow bx "road legal" in case you need to move it around/press it back into sevice quickly,what you don't want to do is take it of the road completely,for a year or two,and in 10 years time...its still there!!! (i parked my GSA X1 in my parents garage in 2000,and its still there!!!)
id like some good photos of the silver one for a bx mk1 register article...

Hello Chris, yes I was going to send you those pictures. If you go to the gallery section you can see all the pictures that I've got.
The yellow fellow will be - brave words - restored before it returns. It needs much work ( when I jacked it up yesterday carefully, one of the sills collapsed!) and a willing BX to sacrifice itself so it might live again. Hence the wrecker TRD that I'm hopefully collecting next week.
Yes, I'm aware of the 'things that never get fixed' trap. But I'm re-assembling the silver BX now after it's new head gasket and that had sat for two years, so there's some hope, though it's not rumbling down the road just yet!