That is not the first time in the last week I have heard of a coil spring 'pinging' whilst stationary. Two others, not Ford that I now know of, one went with a massive bang apparently.
Can you bill the council? it's the holes guv! but now I think it is just a deliberate speed preventer and hell pass the cost onto the vehicle owners. Try asking your MP to go down a road with 'traffic calming humps' at the legal 30mph in an old type Mini or Morris Minor....

Actually, the roads round here aren't too bad generally - I think the biggest factor will be everyday use up a rough logging track! A distinct disadvantage compared with the BX; as I found this morning I need to take it a little more steadily, and pick my line carefully...

My Parents hada front spring fail on their Hymer - 3 years previously it had been clipped on that corner by a tosser in a BMW trying to force his way past on a hill.

I've also heard of a C15 Romahome doing the same thing. Dunno if they failed while parked but I also know of a Xzara estate that broke both it's front springs and a Picasso that has had both front and rear springs fail over an 18 month period.

Dunno about other makes, but the guy with the Romahome was told that Citroens from around 2000 - 2002 had a problems with their springs being too brittle and failing in cold weather - all the above Cits are in that age range.

All suspension springs will break at some point, its just wear & tear along with rust. My dads fabia had a spring collapse whilst he was driving & on the way to the airport for a holiday. He carried on after stopping to check what the problem was to his local skoda dealer, explained what the problem was & that he was on his way to the airport for a holiday. They dropped everything & replaced the spring within 30mins, charged him just for the price of the part & he & mum were on their merry way to the airport will plenty of time still

Round here the springs can break on a new car let alone an oldish one. Pug 406s both fronts on same 'pothole', 2 year old Fiesta in Godalming at 15mph on a pothole etc etc. Must now know of over 20+ broken springs in the last couple of years. they were not that bad many moons ago. I am aware of at least one manufacturer having steel springs of the incorrect grade and it got too brittle in the winter....

Maybe we should just stay inside or wait for global warming...
Top

One theory is that springs are more susceptible to breaking at the beginning of a journey on a cold morning before they have been worked so avoid the potholes at this time if possible. Not sure if there are any legs in this theory.
Kevan
1987 Citroen BX MK1 diesel estate.(Currently in dry storage)
1997 Mercedes C230 W202 - daily driver.
2010 BMW X1 SE 2.0D Auto - Her indoors daily driver.
2003 Land Rover Discovery Series 2 Facelift TD5 - Daily driver / hobby days and camping.
1993 Land Rover Discovery 200tdi Series 1 3 door - in need of TLC
Top

Ah, something I'm qualified to comment on! From the steels used for springs, Cr-V steel is probably the most susceptible to temperature effects. Going from +20 to -40 °C it will lose about 30% of its toughness whereas the 'best' (in this aspect) will be very similar. 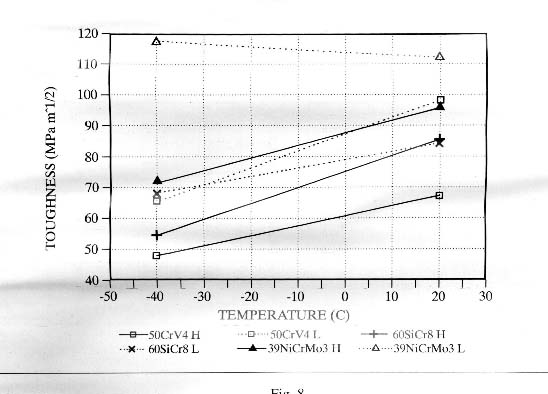 I really can't see any significant difference in temperature with use, apart from the heat of the engine affecting the front springs, and we're only really looking at a small part of the graph. But if something is marginal, the weather may tip it over the edge...

Anyway, a new spring has been ordered so will fit that next week. I'd rather just pop a new sphere on! At least I only have to do one side, as a steel spring maintains the same spring rate all through its lifetime whereas spheres gradually lose pressure over time so would only change them in pairs.

Big Mercs of '80's/90's suffered from rear spring failure. Often on a cold night, they would go with a noise like a pistol shot. I never really understood why but it would seem to be the spring is in stress all the time, gets worked and a change of temperature is enough to sheer from some fault within the material. I wonder if it is a sign of damper inefficiency? Unfortunately differing spec Mercs have a choice of 6 spring ratings. These are coloured. Except by the time they hit the scrappy, they are not. All being crudable rust coloured. Do you fit two old springs knowing they could fail soon or buy the right new one?

A frustration and not a task to do without the correct tools. A lot of stored energy in a compressed spring. Friend of mine uses a strutt inside a compressed spring to protect his lockup. Very naughty but his take was it would look like an accident. He did indeed get broken into but nothing was taken as the strutt insert went clean through the door and frightened the culprit off. Lucky it did not hit him. We think he must have been bent down at that moment. It would have got him in the upper torso or neck.
Miguel - 16 TRS Auto S, light blue, 43k miles - £450
Pluto - 14 E S, White, 105k Miles - in work
Egbert - 19 16v Gti, White, A/C & Leather, - Keeper
Walt - 17 TZD Turbo S, graphite, 70k miles, good op extras - Keeper
Scraper- 17 TZD Turbo E, blue, 208k miles - parts
Homer - 19 TXD E, Red, 189k miles - £250
Gary - 17 TZD Turbo E, 118k miles - in work

That graph only shows a pretty narrow range of operating temperatures. It would not be too unreasonable to expect -50°C or colder in Europe in winter with wind chill, to over 50°C ambient in the shade. So you could cover say far east of Germany and Poland in the winter (or the Alps) to Sicily in the summer. Anti freeze goes to -36°C which you can get close to in the Alps but not southern England.
When selecting materials for some projects I have worked on the diurnal range or seasonal range can be very important. Hence on the mobile arial masts you can get 5-6mm movement on the outer front cover compared to the back part. In this case you don't seal fully and you let the cover travel from one end. Same time you let it drain properly.
Try snap together boxes 1 meter underground anywhere in the world with no fasteners.....

oh and cables coming out....

But wind chill factor only affects a heated object (like a person). For example an air temperature of -30 °C and a 24 mph wind feels as cold as a still air temperature of -50 °C. In the main though, the graph more than covers the usual range we'll see in the UK.

Maybe Mat, but you get ice forming on railings at + temperatures when water is driven by the wind. That's part of bringing down power lines because of the extra weight and trains that stop with the wrong kind of snow!. There is a temperature when it can't snow because its too cold but blizzards can still happen. So a part that is sheltered can be chilled by something colder or something with a different evaporation point. Like ice forming on your visor but not on the seat of your m/cycle, worst thing to ride in freezing fog and the coldest.

If you sell a car in the UK it must be fit for the rest of Europe even if you need to change say anti freeze because it is a few hours drive away to very different conditions. I agree -30° is enough in the UK but in '03 our daytime peak in the shade was +38° round me. Coldest I have ridden in was -17° and I have the pink stuff in the BX as -15°to -17° is becoming common over the last few winters. This pushes the more common blue stuff close to its limit, so I prefer to be safe. I saw diesel freeze (or reach gel point) in a Freelander at -26° at Les Deux Alpes.... it just stopped, springs held it up though!.
Top

Interesting subject - did you know that water actually freezes between -36 °C and 0 °C? Between the two point freezing must be encouraged, either by an ice nuclei, or impurities. In practice though, most water is sufficiently impure so as to freeze long before -36 °C. We (at work) daily take extremely pure water down to around -8 °C, and then initiate freezing by giving it a quick shake - from the bubbles formed on shaking.

The instances of water freezing on railings may be down to water which is already below 0, but not yet frozen, hitting an object that is itself above 0, but freezing being initiated by the movement. It is also possible for objects to cool below the ambient temperature by radiative cooling, which is another explanation for frost forming when the air temperature is above zero. This effect is diminished by air movement however.

EDIT - here is an example of the kind of thing we do at work; the temperature within this tube will be at a very stable and precise 0.010 °C (although this can decrease by about 0.0001 °C over 20 years, depending on the glass used).

Never thought I'd be discussing this stuff on BXC!

The other interesting area is water or really rain formation where tiny salt crystals act as the initiation point for the H2O to gather. There is a lot of work on it as per trying to alleviate droughts, etc and also to create a cloudbase to protect us from global warming ie act as a sun screen. Interesting stuff how the energy in one form is transfered in another state and so on.

That triple point is a very interesting feature of water and the one other really fascinating element is of course Carbon in its many forms.

BTW your vids don't play - an error occurred - permissions I would guess.
Top

Is this any better?

I just embedded the video in my post previously; not sure why it didn't work for you.

Yup, that Utube link works fine. I'm not quite sure why it does not work inside the post. Mind you I'm still using a Win2k box with Firefox and current Flash player with cookies turned off most of the time.
Yes I do have a much newer Win 7 box.. and an old Win 98 one that still works fine!.
Top
Messages: 1938