Hang on in there Andrew, it's a lovely car (and awesome colour too) and you've put so much effort into it!

From what I have read, fitting a 2.1 is a hell of a job, it seems you have to hack the body about to make it fit, would be great fun in a BX though. I guess it all hinges on the verdict of the garage, i'm all for better the devil you know, but it would be fun, if not cheap, to change the engine for something a little bigger/more powerful. People in the past have lauded the conversion of one fuel to another as not worth the hassle IIRC. Im sure someone will be along to say with more certainty.
I'm not a Saint, or a James, but a Tom Saint-James!

Cheers Tom, the car is safe, first and foremost she'll ride again in some form, what form that will be will depend on what happens next week.

Like you, I'm of the mind of devil you know over the unknown and getting another BX that I love as much as mine would be tough, sure its got tatty paint and needs a growing list of welding and a new windscreen and work done round the a pillars and the sunroof is buggered but this is my first BX and Ive always said it's a forever car and I do intend to keep it that way.

But truth be told, if I had to step out of the BX world I'd find a nice mk1 AX GT or import an AX Sport from France if I could. I'm hoping things don't come to that though!

Over-all I'm just feeling a bit defeated at the moment with the car constantly throwing curve balls at me and time/pay checks running out to get things booked for the 2017 challenge, I'll have to see about either joining up half way through or skipping it all together if I can't make it for the start of the event in June. Again, thats still a few months away so we'll see what happens between now and then.
'02 Clio Dynamique 1.2 16v - 92K - Sold
'09 Yamaha YBR 125 - 1100 miles
'93 Bx 17 TZD Turbo - 240K - The Aubergine

OK, fingers crossed then for next week and that you can join us for the start!
I'm not a Saint, or a James, but a Tom Saint-James!

Bad luck mate but she's done plenty of miles, I would avoid fitting anything other than a 1.7/1.9XUDT as its a faff plus it would be classed as a modified car and you have all the fun of the DVLA numpties to deal with, however if its just a head-gasket then I would go that way first, if the originals lasted this long then......

I think a good used 1.9 engine would be worth while, plenty of them around too.
Lots of Motors, mostly semi broken....
Top

She has done her fair share of miles i'll give her that! Will need to see what if any damage (I'm assuming it has done some) was done driving 3 or 4 miles with both coolant temp lights on.

I think at this point it might be just a case of head off and see if the gasket has failed or if the heads cracked or warped. Something just isn't right with it at the moment.

Engine swap wise I'd probably stay XUD for the ease of not having to change the fuel set up. If it ends up being cheaper to change the engine then it will depend on whats available as to what goes in. All I know is that I want to keep the turbo haha but with the head off it might be worth seeing what condition thats in as well.

No news on the fate of my car yet, maybe tomorrow or Thursday, half of me wants to know and half of me is dreading it.

Where is the engine out of interest? Might be someone local to it who could help it find its way to you...

Its down Taunton way, between Bristol and Exeter so would be a 6/7 hour round trip there and back if I wanted it.

At the moment I'm not sure if I'll need it either, fingers crossed I don't, but there may come a point when swap is cheaper than fix, and while the engine is out for a swap then new engine mounts, new clutch, acc sphere could do with being done and patch work to the inner wings and what not could also be done/looked at better.

Like I've said, I've asked for mileage just out off interest.

Heres the listing and to me a £250 engine (thats also open to offers on - can't imagine there is a huge demand for XUD7TE engines these days) that would drop straight in doesn't sound too bad, but then again, devil unknown so...

It might interest you to know that I sometimes work in Taunton, and live 25 miles away Andrew. Not sure if that is of any help, but perhaps something could be worked out. I will want to be putting some miles down in the GT before the challenge.
I'm not a Saint, or a James, but a Tom Saint-James!

Cheers for the very kind offer Tom, it's appreciated.

The engine on eBay has done 75/80k or so which is many miles fewer than my current one.

Ive had photos of mine with the head off now and they doesn't really mean a lot to me but it looks like 3 out of the 4 cylinder had issues between the cylinder and the cooling system, I'm guessing thats what the fingers are pointing at... 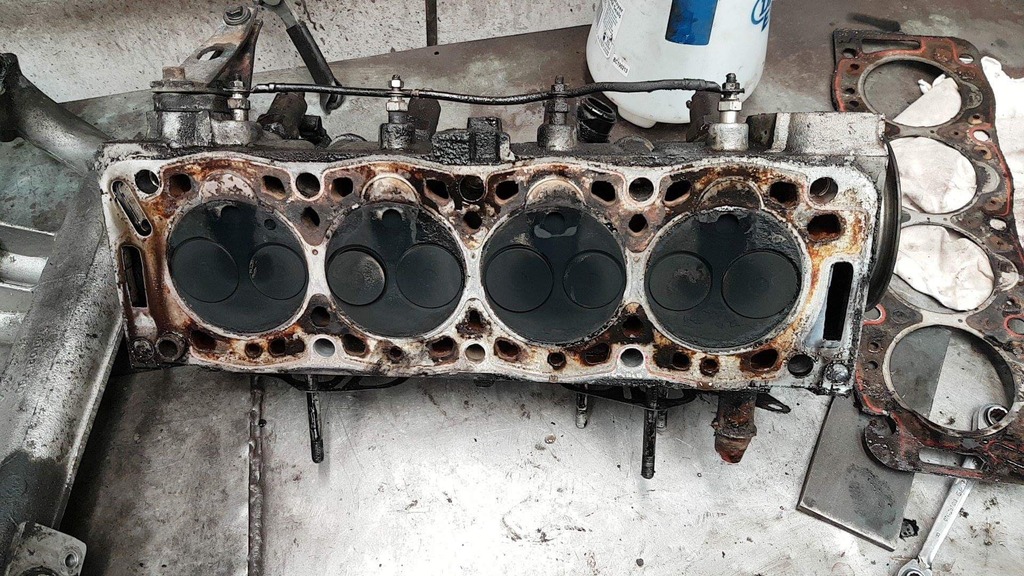 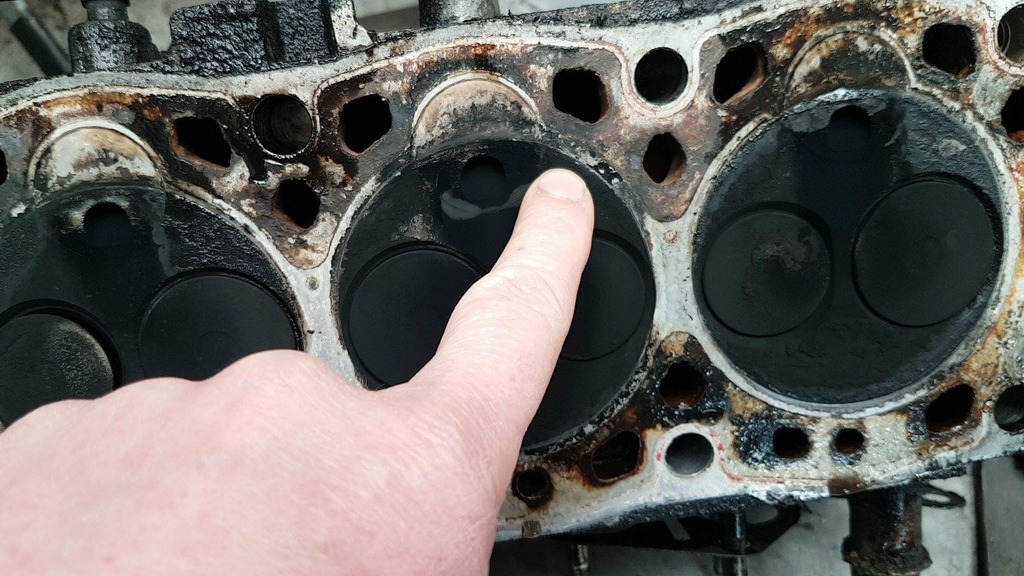 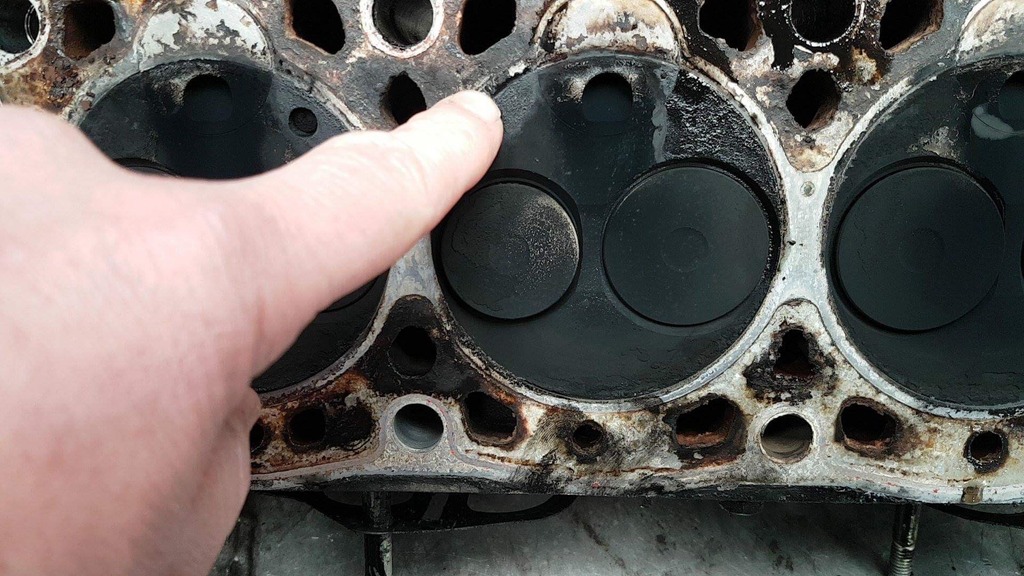 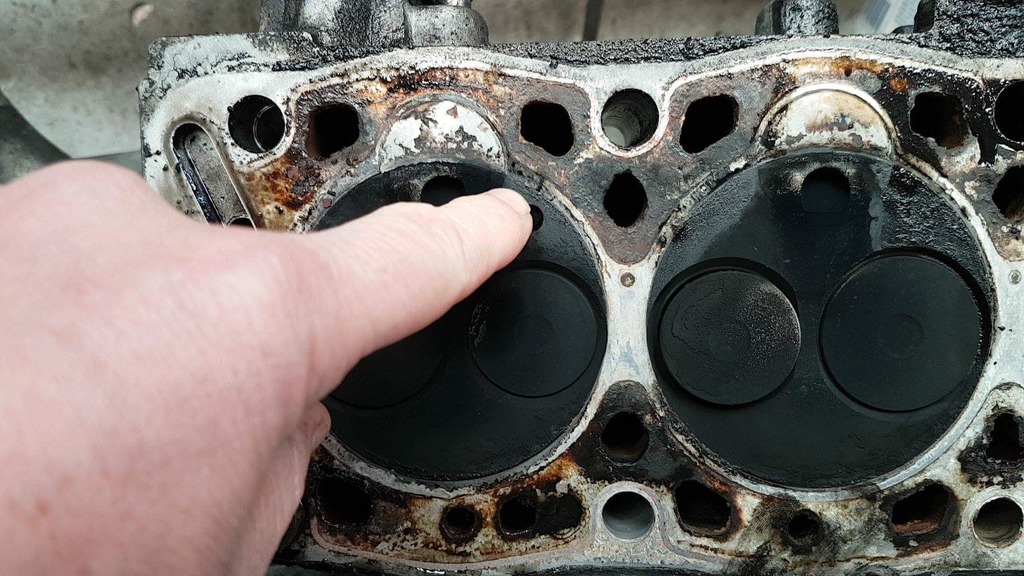 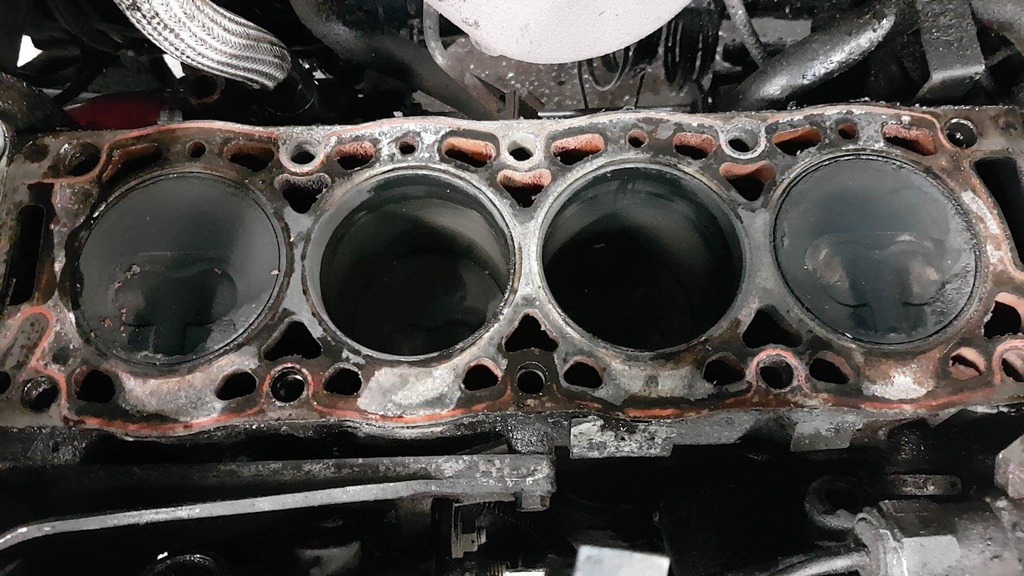 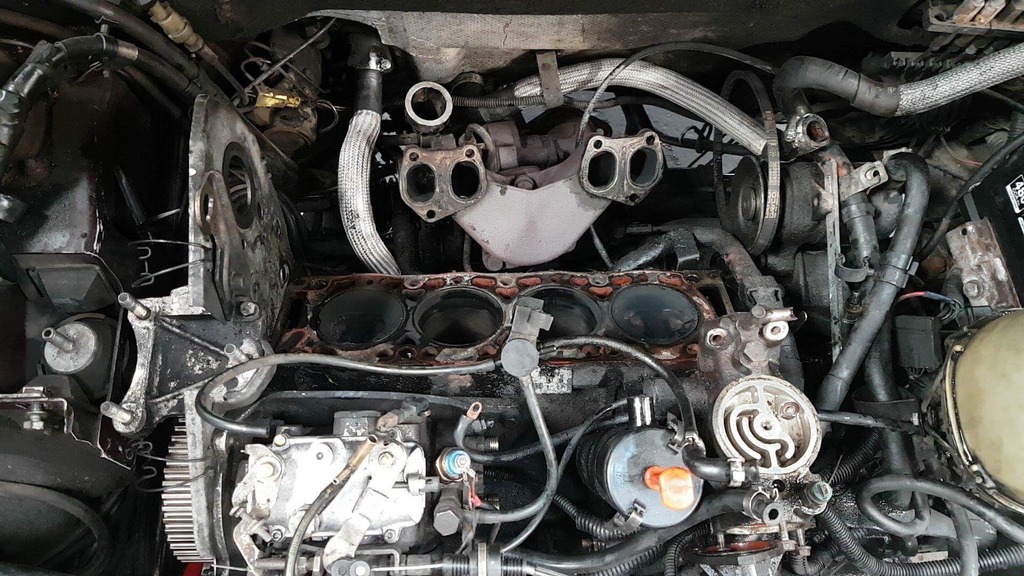 That does not look too bad really as long as the head is solid just a skim and cleanup of the block will fix it.
Every BX I have ever had has had a HG failure at some point. But fortunately I can fix them myself.
Reasons to be cheerful.
The Joy of BX with just one Citroën BX to my name now. Will I sing Bye Bye to my GTI or will it be Till death us do part.
Top

As John says it doesn't look to bad, a head skin and clean up should hopefully do the trick. I would be not wanting to fit a used unknown unit unless yours was no good.

J119 had the exact same issue two years ago at 193000 miles, Barry sorted the head gasket and it's been fine since.
Lots of Motors, mostly semi broken....
Top 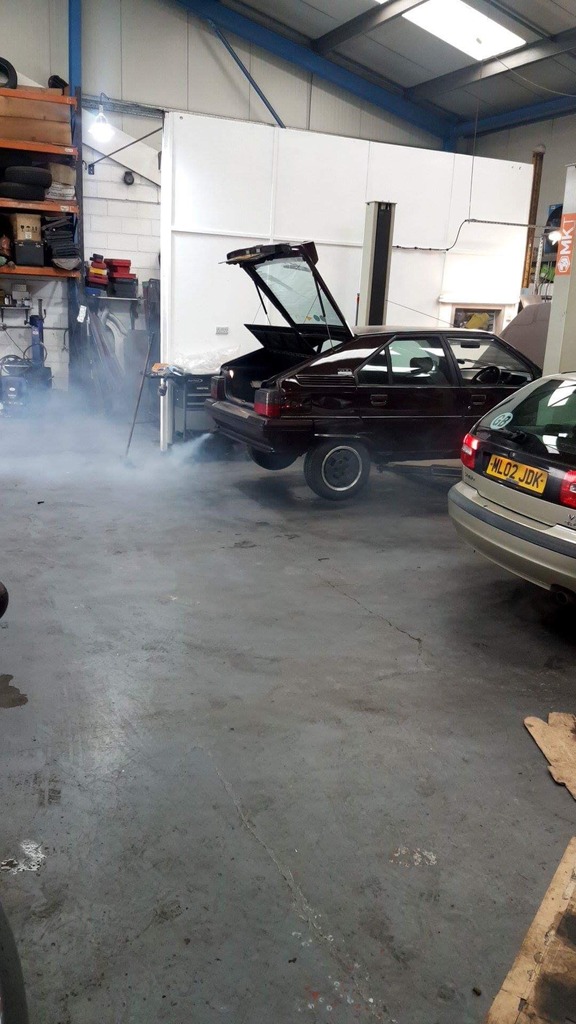 Rob at Chevronics sent me this today, and a happy chap it made me haha

I know she isn't out the of woods yet, but this is a big step in the right direction and it's given me something to smile about as well

Right, where to start. Ive had the car back with me for 2 to 3 weeks now after having had the head skimmed and the whole coolant system is running on new pipes. Ive only taken her on short trips at the moment and just making sure everything is running as it should and slowly restoring my trust in the old gal.

So other than that I've done a few minor jobs that just needed doing.

The positive terminal clamp on the loom had ripped and was millimetres from failing completely so I change the clamps on both positive and negative to some quite smart looking Amazon jobbies that only cost a tenner. They come in gold as well but I though that was a bit too bling for the engine bay of a BX. 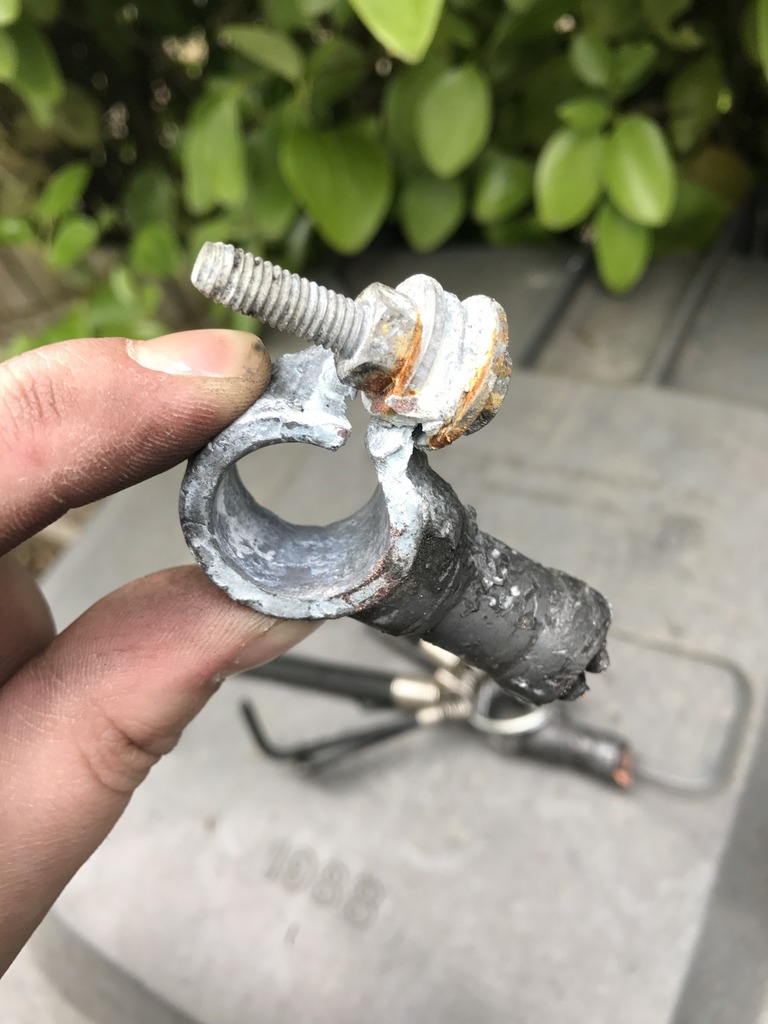 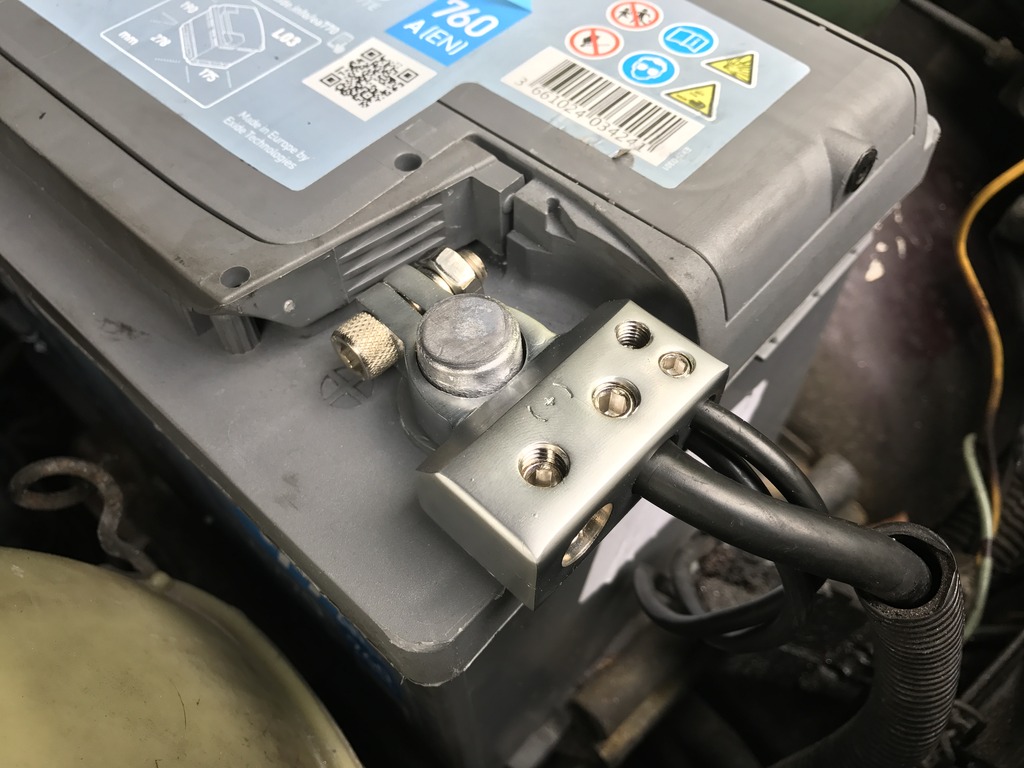 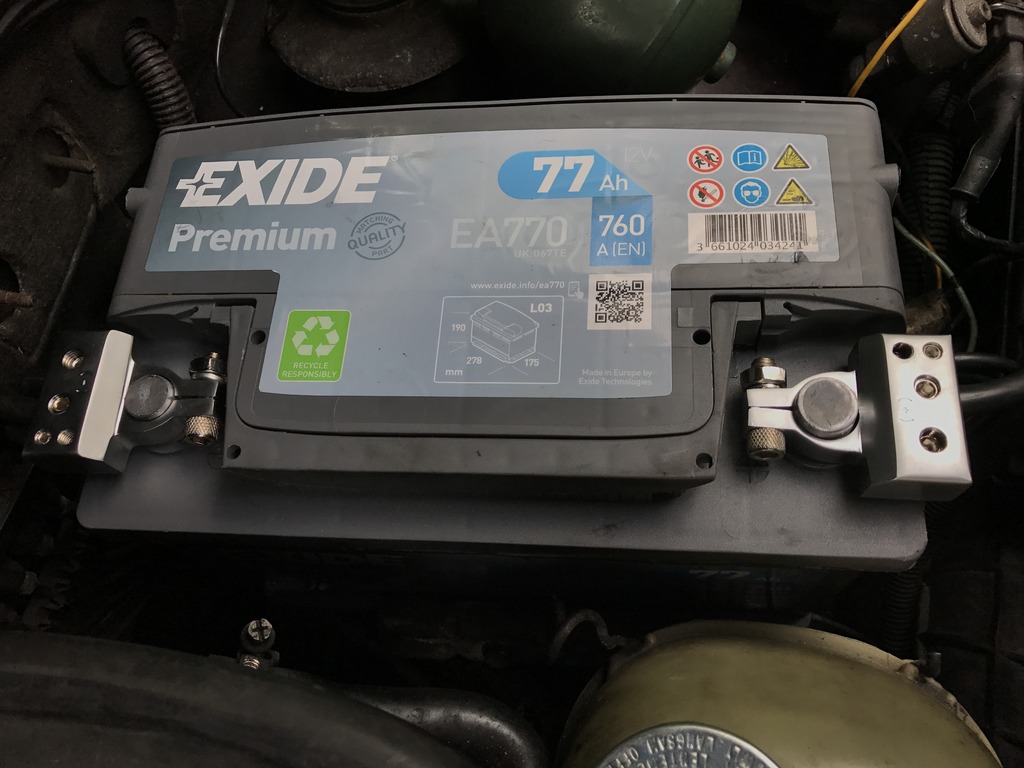 The other thing I've been doing is collecting parts together to fit a GTi 8v / 16v dash to my car. 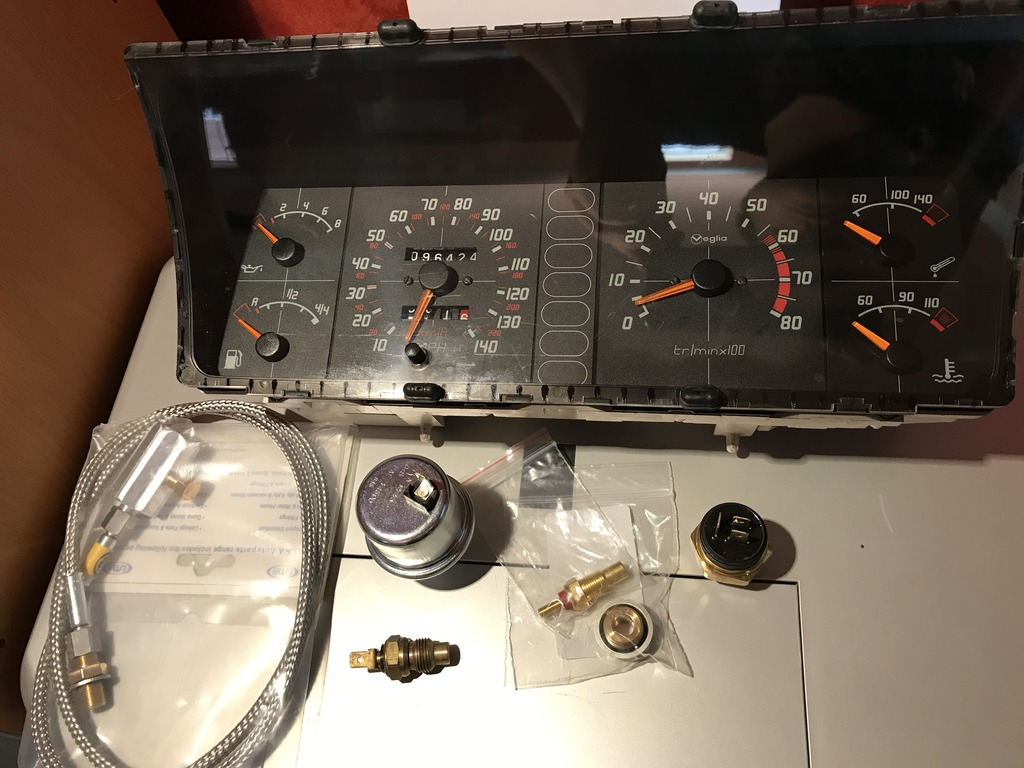 Ive got a new Rad fan switch to go in while I'm changing the 'Red Light Of Doom' sensor to a coolant temp sender and will swap the wires round so the Orange sensor brings on the Red light on the dash and the Orange wire will drive the temp gauge on the cluster.

One thing that has confused me a bit though, my original oil level/ low pressure gauge has never moved more than a few millimetres when you start the car. It flicks up a bit off the resting position but not all the way to max. Am I right in thinking that this is a two stage unit but where is the oil level sensor ? Ive changed the oil pressure switch in the past and it made no different to the operation of the gauge.
'02 Clio Dynamique 1.2 16v - 92K - Sold
'09 Yamaha YBR 125 - 1100 miles
'93 Bx 17 TZD Turbo - 240K - The Aubergine