Tell us about life with your BX, or indeed life in general!
Messages: 25 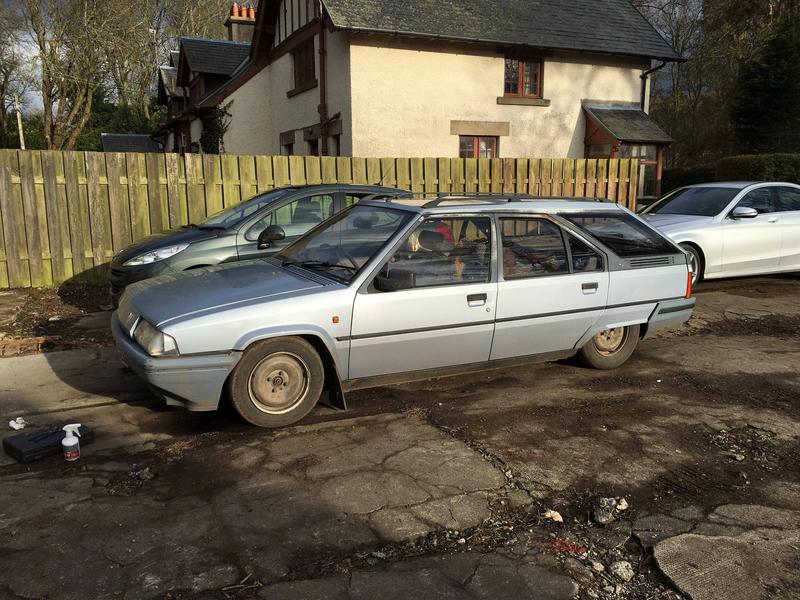 Some of you might have seen something about him already on facebook and I've had a few posts on the forum.

In short Bertie came into my life when I was looking around on ebay when my Volvo 480 was showing it's age a bit to much and it would be to much of a hassle to get it registered on UK plates and get it MOT'd and moved from the top of Scotland down to Edinburgh.
Although there has always been a curiosity to own a BX I wasn't necessarily looking to buy. But after a slightly intoxicated minimum bid on ebay it turned out that nobody else had bid on it and I bought a '87 BX TRS auto estate for 400 pounds, sight unseen. 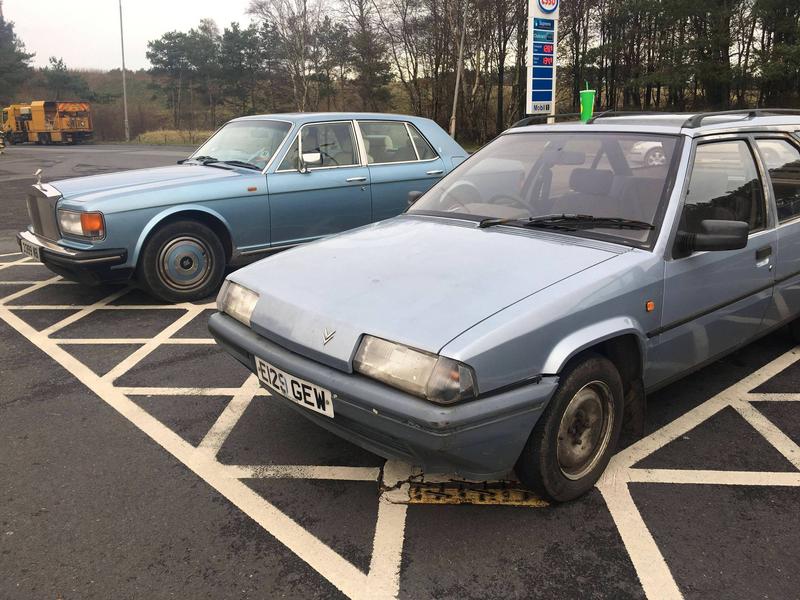 It actually seemed to be a good deal with a years MOT ,allegedly 4 new spheres, 80.000 miles and little rust.
After the 500 mile trip to Sheffield and picking up the car it only took me 3 days to bring it back up north again.
There were some minor hiccups. 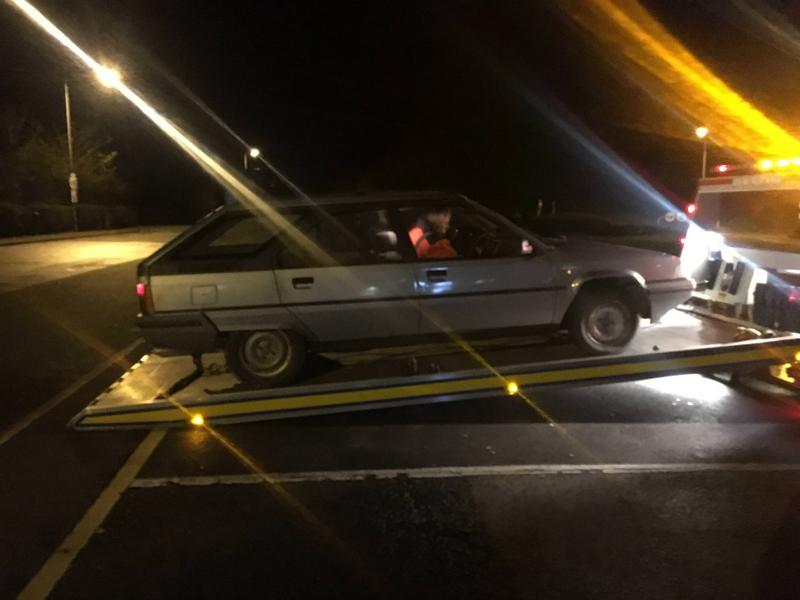 There was a lack of LHM, a couple of leaking points and a substantial fuel leak.
Coming unprepared without LHM or some rubber hoses it was waiting a night at a Services after being picked up by a tow truck driver.
The following day we managed to fix some of the problems and carried on halfway to go and fix some more problems. 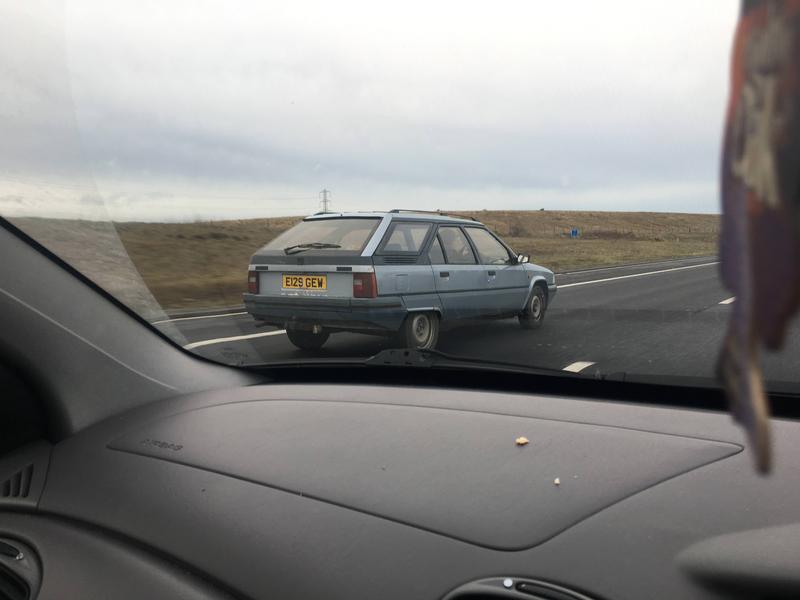 Eventually it made it all the way back up North.
Having come home it turned out there was a leaking octopus.
That took a while to fix. Other problems that I've fixed were a stuck heater tap and I did a massive cooling system flush. 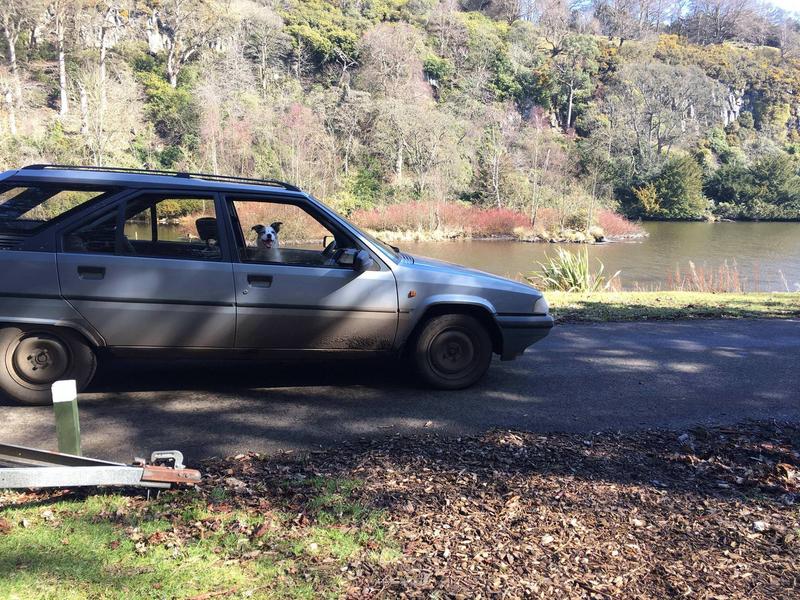 It helped me move down to Edinburgh where the oil cooler decided to be leaking. Which was in an absolute horrible state. 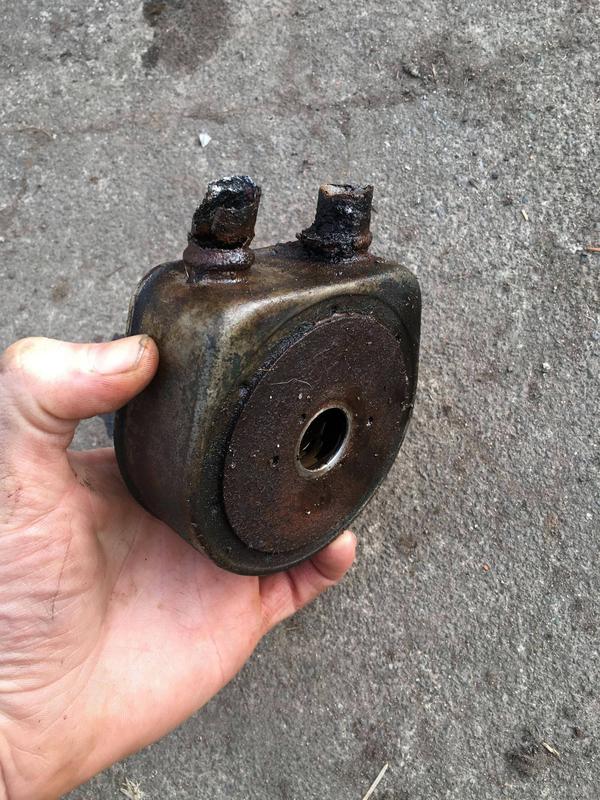 I'm urgently looking for a replacement after false promises from somebody who would supply me.
Can anybody help me out with one?
Top

The car has surfaced a couple of times on the forum already as well.

Firstly, your car is Olympic blue... so it's a winner

Thirdly, as far as I know, the oil cooler is nothing special and you can fit an aftermarket one with ease.

I have an oil cooler if you still need one, it's from a diesel but I think they are the same.
90 BX Tzd turbo 294k SORN undergoing major surgery
90 BX Tzd turbo estate 46k awaiting surgery
65 Peugeot Boxer Van the new workhorse
52 Toyota Rav4 180k Bulletproof Jap reliability
Top

Thanks!
Now I just need to fix all the leaks to make it more habitable!

You forgot to mention 1 thing, thirsty

I haven't had the full comfort yet, I've just ordered 2 rear spheres and I've got a new (I think) accumulator in the car.
It drove lovely though when it was loaded to the brim when I was moving house!
Top

Oh that would be very good, I'm also after the hose from the oil cooler to the thermostat...
I don't think that would be the same.
Top

Yes, probably very thirsty although a tune up might be helpful. Maybe an LPG conversion one day? As it is carb, it's not so difficult as it just hoofs the gas in through the air intake. I had a 16 TRS with LPG and it was great. If I had a BX again I think it would be basically yours but with LPG and maybe saloon.

I'm not sure where you are in Scotland but I bought one of my BX's up there from a member on here called Aerodynamica. He is a lovely guy and very very knowledgeable about BX's and Citroen hydraulics. (I realise this must be like going on holiday and people saying 'Do you know Hamish?'!!!). Might be worth giving him a shout.

Oh, wow, I've just clicked the links to when the car was previously mentioned on here. I've seen your car in the flesh and know the old owner jeremyC5. He had it in Cambridge but never did manage to get it on the road. I'm really pleased it's found a good home. He must have sold it to the guy is Sheffield.

Hate to burst the bubble, but that's not Olympic Blue though!

Is that really olympic blue? I really don't think so, its much more "blue" and much less "silver" than this one!
Anyway, a nice ride. I just recognized its way lower at the front / upper at the tail, so it looks kind of sporty, which is looking damn nice on that estate!

Yeah I believe it's magnetic blue as well.
Speaking about colours... The window surrounds aren't black but do need attention..
Does anybody know which colour this should be?

St.Eve wrote: ↑
Sun Apr 29, 2018 4:43 pm
Is that really olympic blue? I really don't think so, its much more "blue" and much less "silver" than this one!
Anyway, a nice ride. I just recognized its way lower at the front / upper at the tail, so it looks kind of sporty, which is looking damn nice on that estate!

I've been driving around for a while with it's bottom pointing upwards because we moved the rear height adjuster when fixing the petrol leak on the roadside. And It took me a while to get it sorted again.
It was some interesting handing trough the twisty mountain roads in the far north of Scotland..
Top
Messages: 25