The O/H is sick of hearing about BX's!

Fingers crossed gents we have filled our allocation! If Stewart (Oily) could pm me please I`ll get straight back to you and Artic I`ll call or text you soon too.
Reanimation is hopefully coming too and we`ve had interest from another good member, things are looking well!
Vauxhall apologist.
Top

Things seem to be coming together quite nicely.Sod the weather,I'm going to enjoy myself no matter what happens

Presumably we've got to be there before 11.30 - what time are most people aiming to arrive, and where shall we meet?
Gareth
Top

Haven`t got the tickets to hand (stuck at work) but was planning on being there pretty handy to make sure I can find our allocation as I`m not exactly sure whether it`s a case of first up best dressed regarding the place to park up together.
If it is I don`t mind nabbing a decent spec (somewhere near the Suzuki GT750 owner`s club would be nice!) and then walking back to the gate to meet the rest of the gang.
If anyone attending or planning to attend hasn`t got my number then please pm me for it and I`ll reply as soon as possible.
Vauxhall apologist.
Top

), but the meet clashes

with the CCC meet at Beaulieu (which is just down the road from me).

Barnsley BXer wrote:I'll just ask at the gate to direct me to the best looking cars on the field

What, and then ask their owners where we are hiding?

Ok, Stewart`s been on and apparantly there is no mobile reception around there

Never mind, he`s had a bit of a brainwave and we`ve both got walkie-talkies so the plan is for him to `shout` me when he arrives.
I`m not sure if we can leave the tickets ate the gate so perhaps if we try and meet up at around the same time and have another time for people with longer journeys?
I`ll aim to be there for about 08.30-09.00, if anyone else has a reasonable idea of what time they`re arriving then please let me know.
This will only really apply to those who want tickets on the day (still have 3 left, first come first served) as those who have had tickets through the post can turn up as and when I believe.
Vauxhall apologist.
Top

Just getting ready, anyone coming up I`ll look forward to meeting you. Will try and leave tickets at the entrance if they let me, failing that perhaps ask someone to come and find us?
Camera ready, directions set-see you there!
Vauxhall apologist.
Top

What a cracking day! Nice to put names to faces: Oscar, Adam & friend), Dean (& family), Mulley & Mrs Mulley, Gareth and Stewart, (of whom I think I`ve only met Stewart before) it was a pleasure to meet you all.
Six cars made it, hats off to Oscar and Adam who came a very long way. I cheated a bit as due to not having a roadworthy BX I took the 1.9TD up on the recovery truck and then drove it (BX) into the show!
5 TZD`s and one GTi, some lovely scenery and some great classics on show meant I at least spent a very enjoyable day.
Alas I didn`t stay to collect the plaques sorry gents, I was worn out but I`ll certainly see if I can get them posted out. Have a towbar for Artic here and some readies for Vanny.
Hope the ones who had long journeys home get/got back ok and enjoyed themselves.
Oh, as regards the £2.50 entrance fee I got from you all I`ve decided to donate it to a charity, any suggestions?
Pictures to follow when my silly digital camera decides to play ball!
Vauxhall apologist.
Top

Well that was nice, I met some new folks and some old ones too, six cars looked good in a line there, here are a couple of pics, I hope I resized them correctly, if not then mods I am sorry for the big images

Without wishing to swamp the forum and not being clever enough to downsize pictures I hope these don`t cause too much concern... 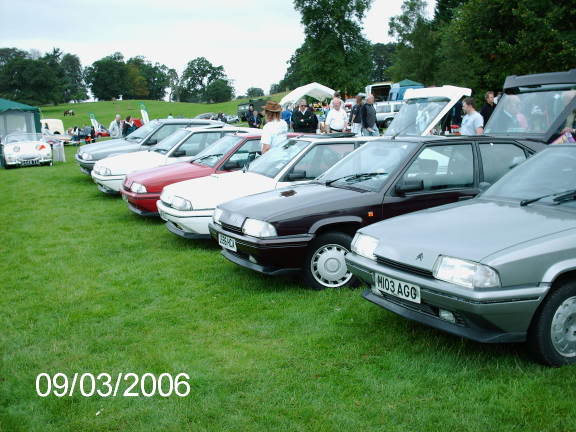 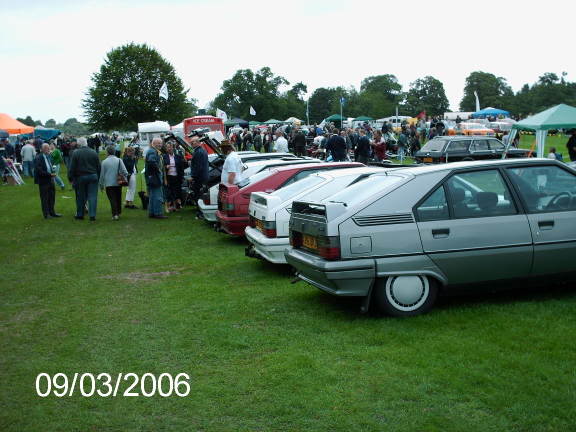 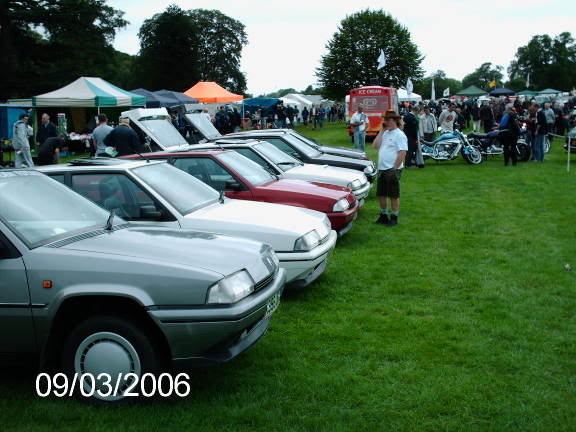 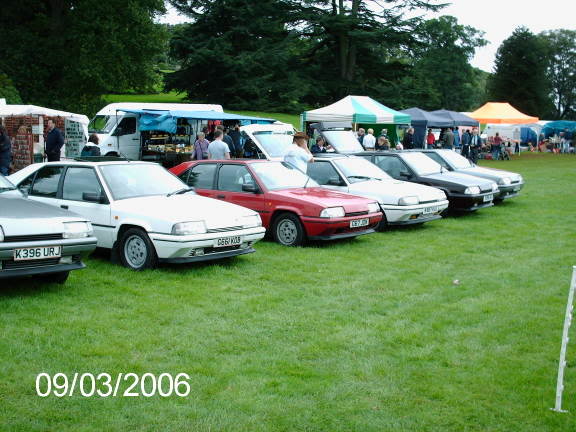 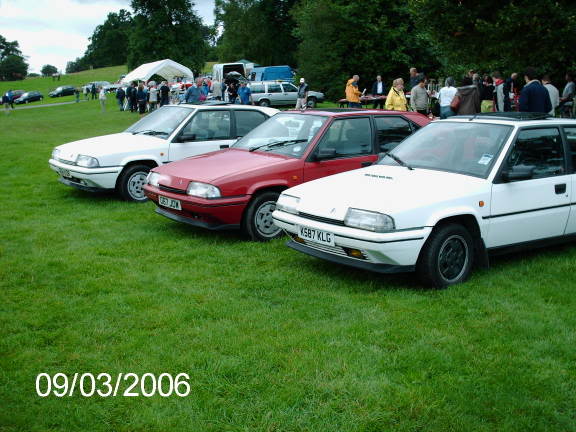 Top picture should show (from left to right): Gareth`s TZD, my 1.9TZD TD, Oscar`s TZD, Stewart`s 1.9TZD TD, Dean`s TZD and last but by no means least Mulley`s GTi.
Didn`t see another Citroen of any description anywhere else but I didn`t really have a good look round as the company I was in was too good to leave!
To those that couldn`t make it thankyou for letting me know and I`m sure we`ll all meet up again before too long.
Vauxhall apologist.
Top

Photos fine Mr. Mad - sorry I couldnt make it, though after james redecorated the front passenger foot well with hints of chunky carrot i doubt my car would have been very popular.

Thanks to Billy for organising it and to Dean for the pies and beer.......
Amen to that from me too.
The location was a delight, and the pies were the way real-pies should be
It was a great day out - in the low-key, no-fuss-way which marks the BX Band of Brothers.
I must say Oscar's long distance drive was indeed a tribute to the strength of our mob.
Here's to the next one, and Billy, I'll donate to the local hospice at home movement.
Now for our Grand Christmas Dinner