Thanks for the encouragement, the engine should be in by tomorrow (weather permitting) and I hope to post up a video of the first start up!!! I reckon that this will make my car unique, as I don't know of another 1.9TD with aircon (exit smug mode, let's wait until it's running before I start getting cocky!)

I'll try and post up some more photos later...

Todd, it's not a Christmas tree farm but our patch backs onto a large area of forestry (although if anyone pops round at Christmas I'm sure we can find a tree

) Boxing in only half finished though, looks worse than when I started.

Never mind, priorities and all that!
Top

Non the less, air is good.
I still have an air con kit for mine, and one day before I die of old age I shall fit it..
Probably..
Smokes lots, because enough's enough already!

I'd got the same idea about Stewarts, but I don't think it did have when I saw it at Huntingdon...anyway, time for an update (pics resized to speed up loading).

Today saw the fitment of the Garrett turbo, which seemed to be in great condition despite my earlier worries - no play in the bearings and span nicely. 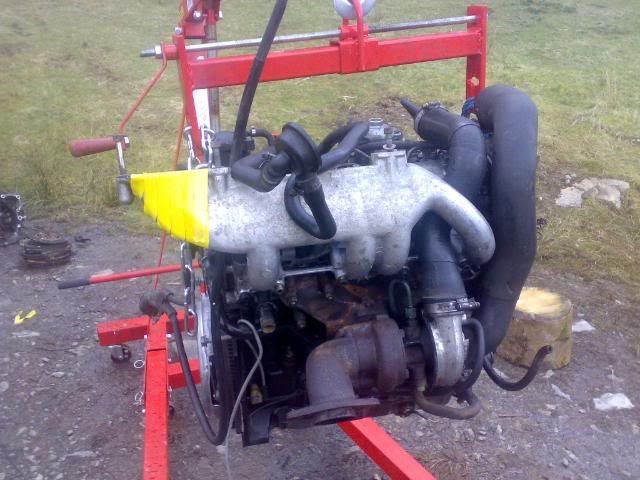 The tape on the inlet manifold is there to stop the frequent showers from filling the engine up with water before I could get it under cover.
Then it was on with the gearbox and timing belt... 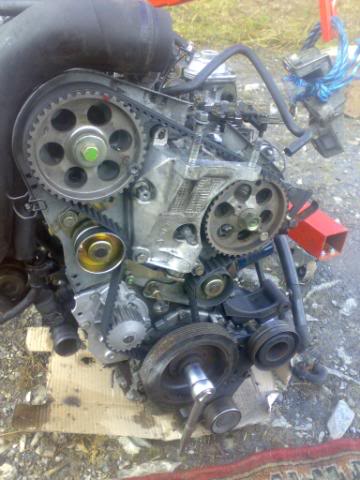 ...The above photo was taken after about 5 minutes struggling to fit the timing belt over the pulleys - I was starting to wonder if I had the wrong size. Then I realised I had previously clamped the tensioner in the extended position. Funnily enough, it went on a lot easier once I had moved the tensioner. Please tell me I'm not the only one to make stupid mistakes like that???
Then time to drop the lump in - as you can see from the next photo, the ground isn't the smoothest, and trying to move a loaded hoist uphill was not easy. So I used a spot of 'assistance'. 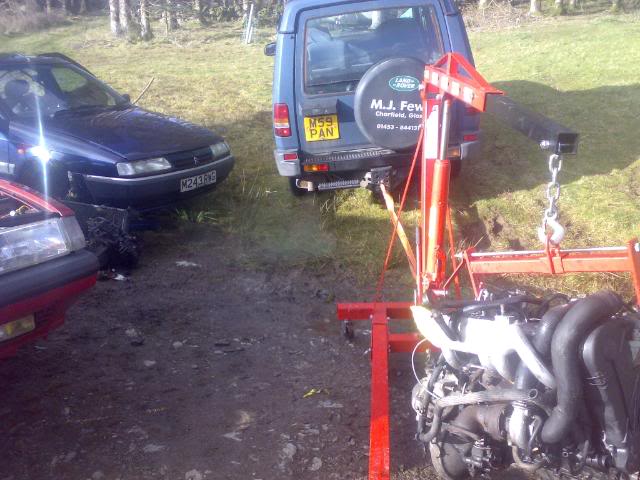 However, when I tried to move the leg end of the hoist sideways, to fit the engine from the side (at least then I would be pushing on the level) this happened... 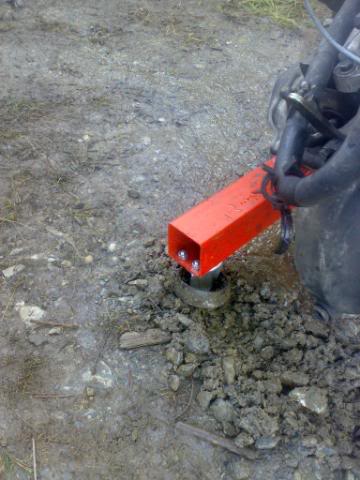 ...I hadn't spotted the wheel digging in.

"Bother and blast" I said (or words to that effect) as that wasn't going to help mobility.
But I did manage to come up with a cunning plan, thanks to Egyptian pyramid builders... 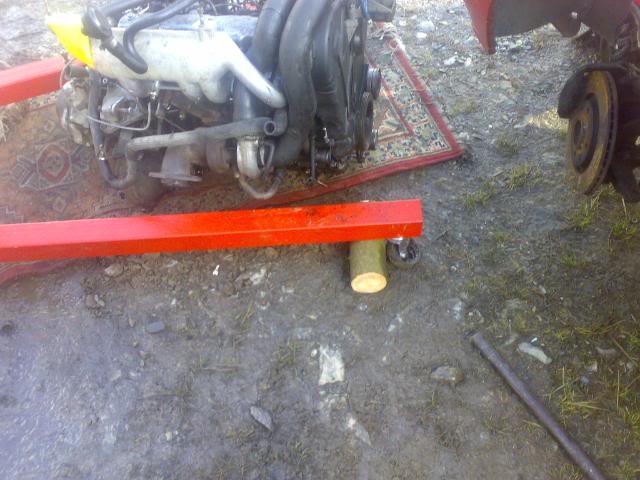 Couple more photos of the engine partway in... 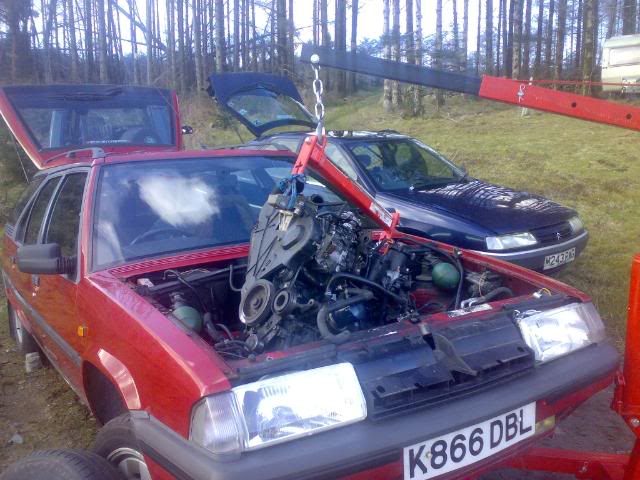 ...and nestling in its new home. 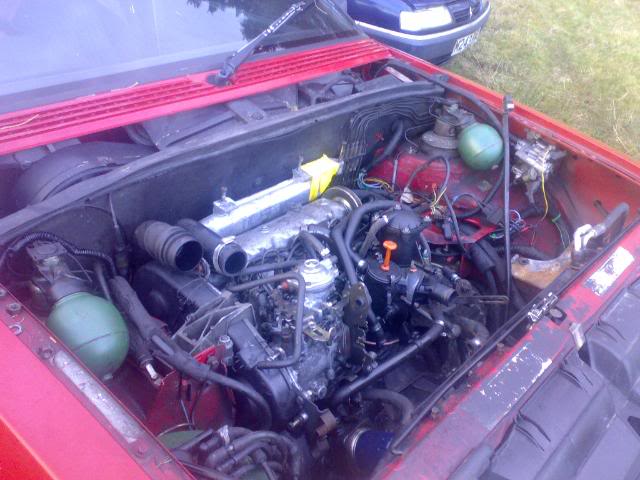 Hopefully tomorrow will see me at least try and start the engine, maybe even go on a test run!

This is great. Beats watching the TV!

We need video on YouTube next (the test run)

Don't worry, I've done the same with cambelt tensioners and wondered why it was so hard to get the belt on. We've all been there

I've done the same with auxillary drive belts too... Ever caught your finger in one, trying to get one on? It HURTS

I could be so tempted. I had a very original 1.6 for four years that I truely brought back from the dead. I only sold it last November to make way for the 2.1TD because I needed an estate. A couple of weeks ago I heard it had been written off

I won't have another 205GTi though. I would have a Valver now... Must be my age.... A Valver and an Activa - now there's a nice combination

I could be so tempted. I had a very original 1.6 for four years that I truely brought back from the dead. I only sold it last November to make way for the 2.1TD because I needed an estate. A couple of weeks ago I heard it had been written off

It's a shame to see your hard work go to waste, I know exactly how you feel as I restored an Alfa 75 V6 a few years ago, mainly welding underneath with a spot of bodywork, looked great afterwards. 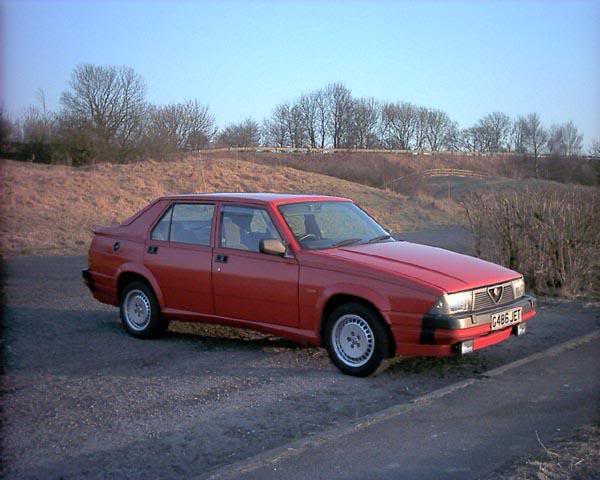 Needed to get some money quickly when we moved house, so I stuck it on Ebay and it only reached £900.

(To make things worse my mate sold a 1.3 Maestro the following week for over £1000

) Anyway, I checked the reg on the DVLA website recently and there hadn't been any activity for a few years, which in my mind means I reckon it's been scrapped.

Well, I've just got it started

Mind you, as first starts go it's not a patch on this (and that particular project is STILL not finished).

Now all I have to do is press in a new lower engine mount, replace a CV boot, put in the radiator, driveshafts, connect exhaust, air ducting, clutch cable, hydraulic pump and it'll be ready to roll...better get cracking.
Top

Bit of a slow day today, worked like crazy but didn't get it to the stage where it's ready for a test run. Not helped by driving to the dealers to pick up a new braided hose to the heater matrix, only to find that not only was the hose they'd ordered in not braided, but it was completely the wrong shape

Then, I managed to drop one of the intercooler secruring bolts into the bellhousing through the little timing window on the top of the 'box. Much swearing ensued, but in the end after remving the flywheel cover plate and running the engine for about 10 seconds, it dropped out the bottom.

Might not get chance to do much over the next few days, as we will mostly be doing a spot of digging... 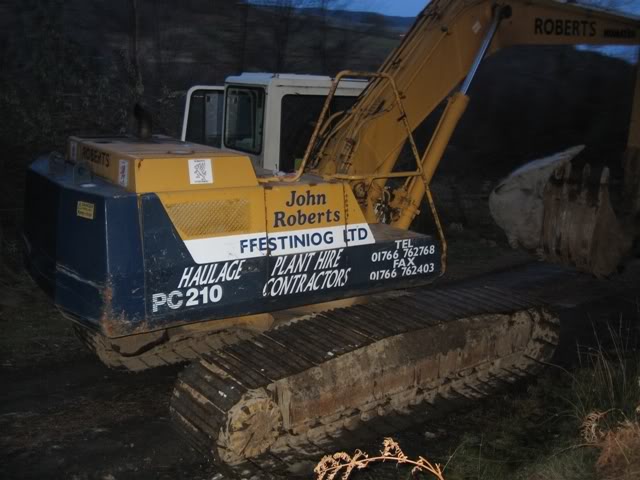 ...well, I'll mainly be driving a dumper truck, got a friend to do most of the digging. I'll have to have a little bit of a play though!
Top

Well I got the BX moved, but only a few feet. Lots of smoke and rough running.

I have asked for advice here but I hope to have better news in the next update.
Top

Unfortunately no positve BX news to report. It's still running roughly despite fresh fuel, and half filling the fuel filter housing with neat injector cleaner (which has had noticeable results previously). The cam and injector timing are both spot on, but I'm reluctant to take it up to speed for fear of doing damage.
The engine is shaking on the mountings at idle, when I open the throttle sharply it hesitates, knocks and then picks up. At amount 2k rpm it sounds smoothish (but still smoky) but will pick up when the throttle is opened without hesitation or knocking. I wonder whether I have a poor spray pattern on one of the injectors, so will whip them out when I have a spare minute.
Not this week though - I have to change a head gasket on the Discovery

After I converted it to run on LPG I had it certified by an 'approved' installer, who had it for ages, claiming all sorts of problems. I'm not knowledgable anough to claim that they were pulling a fast one, but what I do know is that all my connections into the wiring loom were soldered well, and covered with heat shrink tubing. Imagine my surprise when I was investigating a poor running problem, when I found that the wiring from the gas ECU to the original lambda sensor had been cut next to my soldered connection, and crudely 'fixed' back together and covered in tape. To call it a soldered joint is stretching it, as it looks like the soldering iron wasn't even turned on. That's the only time the vehicle has been out of my sight apart from one MOT, so I can only guess that it was played about with by a so called LPG specialist.
It had started running roughly on a long journey, in the middle of nowhere, no choice but to press on. I noticed that one of the exhaust manifolds was glowing red, so kept it gentle, but the head started chuffing from one of the cylinders so looks like the heat from running lean has cooked the head. Bugger. Therefore it looks like someone's short cut has cost me. Still, I can use the later composite gasket, replace the valve seals, check the cam for wear etc. Just a shame that there's a 4x4 event this weekend (kind of orienteering for vehicles) so will have some busy evenings ahead...
Top

Yesterday I removed both heads from the Discovery, below is a picture of one of the gaskets. If you look closely you might be able to see where it has failed...

Picking the heads up after skimming tomorrow morning, so will hopefully have it all back together for Friday!

I'll have to take a piccy of the gasket I removed from a 10.45 litre Gardner lump, now that was REALLY special!
Smokes lots, because enough's enough already!

Still no positive BX news, but I did get the Discovery running in time for the weekend away. When I promptly got my shiny engine covered in mud! It's a good job I gave one of the river crossings a miss though, as my mate gave it a go and took some water into the engine. Some time later after getting it started it smoked like a bugger. That wouldn't have put me in the best of moods...
Bad news here is that the only petrol station within 35 miles selling LPG is closing for a few weeks while the owner goes into hospital for a heart op, and running a 15mpg V8 on petrol will cost me an extra £50 a week

The thing I find really touching is that he is so apologetic about the whole thing, it's not like he's doing it to annoy anyone. There are things in life more important than cars after all.
Anyway, I took the 205 for an MOT today after being stood for a year and all it failed on was seized wipers. The plan being that if I can use that for a few weeks, I can save on fuel and get it MOT'd ready for sale into the bargain.
Thing is I'd forgotten how much fun it was, don't really want to sell it but the idea of getting that engine with a BX wrapped around it is appealing...especially as they still don't seem to fetch that much. But the cash is unfortunately earmarked for the house so have to earn some brownie points first!
Top


There are things in life more important than cars after all.


this yellow writing is really hard to read
Top
Messages: 1938