With water Pump??? that's bloody good going even without. Puts my 6 hours spread over 3 nights for the TZD to shame

With water Pump??? that's bloody good going even without. Puts my 6 hours spread over 3 nights for the TZD to shame

One gets the car in the air/ wheel off/guard off, crank pulley off (after locking) and drains whilst the other does alt-belt/engine mount/covers etc...

Defender110 wrote: Puts my 6 hours spread over 3 nights for the TZD to shame

So, when I get around to attempting this job, it'll take me anywhere between 90 minutes and three days? (I'm guessing nearer the upper estimate there, having never changed a cambelt before...)

What has annoyed me is that coolant doesn't seem very cheap - and the thing has leaked most of its fresh coolant away already. Drat.
www.classichub.wordpress.com
Top

JayW wrote:One gets the car in the air/ wheel off/guard off, crank pulley off (after locking) and drains whilst the other does alt-belt/engine mount/covers etc...

You forgetting the obligatory beer* afterwards!
*Or equivalent

It has taken me getting on for 3 hours to get the crank bolt undone before now, including putting a jack on the end of the near horizontal breaker bar and lifting the entire weight of the car with it to no avail!

I'd be inclined just to top up with water for now, assuming you get the pump sorted soon. Even a hint of antifreeze will lower the freezing point and corrosion is unlikely to be a problem in a short space of time.

beg, borrow or steal a quality electric impact driver for the crank bolt.

Thanks for the tip Mike.

Anyway, here's a latest 'on the road' picture. Feels somehow wrong driving around in something that looks so dreadful (this certainly isn't a 'Roverman' type of vehicle!) but also rather wonderful. 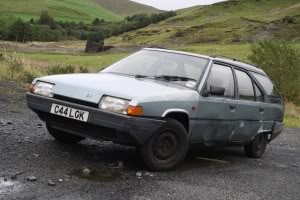 As you can see, I haven't got around to fitting the three wheeltrims again yet. Not entirely confident that they'll stay put yet!
www.classichub.wordpress.com
Top

She is beautiful, a bloody good effort to get her back on the road, cosmetics will be done in time ime sure.

Another thing I've got to do is find where all the engine oil is leaking from. What are the usual culprits with these engines? I'll have to give it a good gunk to clean it up and try and find where fresh oil is coming from. Not looking forward to that as it'll make a right mess...
www.classichub.wordpress.com
Top

But like you say, first thing is to get it cleaned off so you can see.

Feels somehow wrong driving around in something that looks so dreadful

I don't know what you mean - with the exception of the BX I've just sold, it looks a damn sight better than virtually anything I've driven the last few years

. In fact when I first took my BX into work, with it's minor dings, big scratches in the paintwork, and pink front bumper, they didn't believe it was mine as it looked so good! The GS is several shades of green with gaffer tape holding the doors together, and that's an improvement on when I got it (at least it's all green now

). The Reliant I owned before that had a huge crack in the back door and had been brush painted with a yard broom by someone who thought masking was optional, and the less said about the Land Rover with it's moss covered flaky paint the better. The Dyane I used until the C posts fell out the body doesn't have a straight panel on it, a legacy of spending 35 years in London traffic!
Mike Sims
BX 19RD Estate Mk1 - Timex!
BX 4X4 Estate - Oh god, I've done it again!
BX 17RD MK1 - it called to me!
BX14 TGE, - SOLD
XM Turbo SD,GS Club Estate,Visa 17D Leader,HY Pickup,Dyane Nomad,Dyane 6,2CV AZL,Falcon S,Trabant P50,3x Land Rovers (88" series 1,109" series 2a FFR,series 2a Marshall ambulance),DKW F7, Lambretta LD150 x 1.5,Mobylette SP93,Ural Cossack,Ural M63,CZ 250 Sport,Honda Varadero 125,lots of bicycles & tricycles including (but not only) Sunbeams,Higgins & Bates!
Top

Ah-ha! Just worked out who you are Mike. The shabby GS was the giveway. Previous owner of a Warty estate too? (that's the make, not description)
www.classichub.wordpress.com
Top

I think it looks alright. What did that car sticker used to say:

This car maybe old and rusty but it's in front of you.

Once you've got the ticket then it's a rolling resto rather than a resting resto!
Todd


this yellow writing is really hard to read
Top
Messages: 436