Anything about BXs
Messages: 53

I have a couple of grand to spend on the right car, what would be the best model to go for?
Initially I was thinking Turbo diesel (TZD hopefully), but what economy do the petrols give in comparison?

Would it be worth getting a 1.4 or are they gutless?

Finally, what electrics are worth having and what are more trouble than there worth?

Many thanks in advance
1990 Black BX GTI
Top

Electrics arent that bad from an old french car, petrol and diesel both have there merits, the 1.4 is surprisngly nippy but too short geared for motorway journeys really.

The diesel are more frugal and ultimatly long lived, but are a bit slow in non turbo form and of course noisy and harsh in comparison but very smooth for a diesel engine of that era.

What I would say is that the numbers of cars are dwindling fast so you cant be too picky, I would buy on condition and history/mileage instead of just a specific model.
Lots of Motors, mostly semi broken....
Top

Pogo wrote:I have a couple of grand to spend on the right car, what would be the best model to go for?
Initially I was thinking Turbo diesel (TZD hopefully),


Any BX you want with that budget, but there is nothing wrong with your initial thinking!

I have an excellent BX16TGS Estate in white which ime considering selling. Mileage 51k, sailed through last 2 mots with no advisories. 2 owners before me. Bought it off a 90 year old gent who kept it in a heated garage. Tim has seen it so will confirm its condition. I want £1500 for it. Built June 1990. 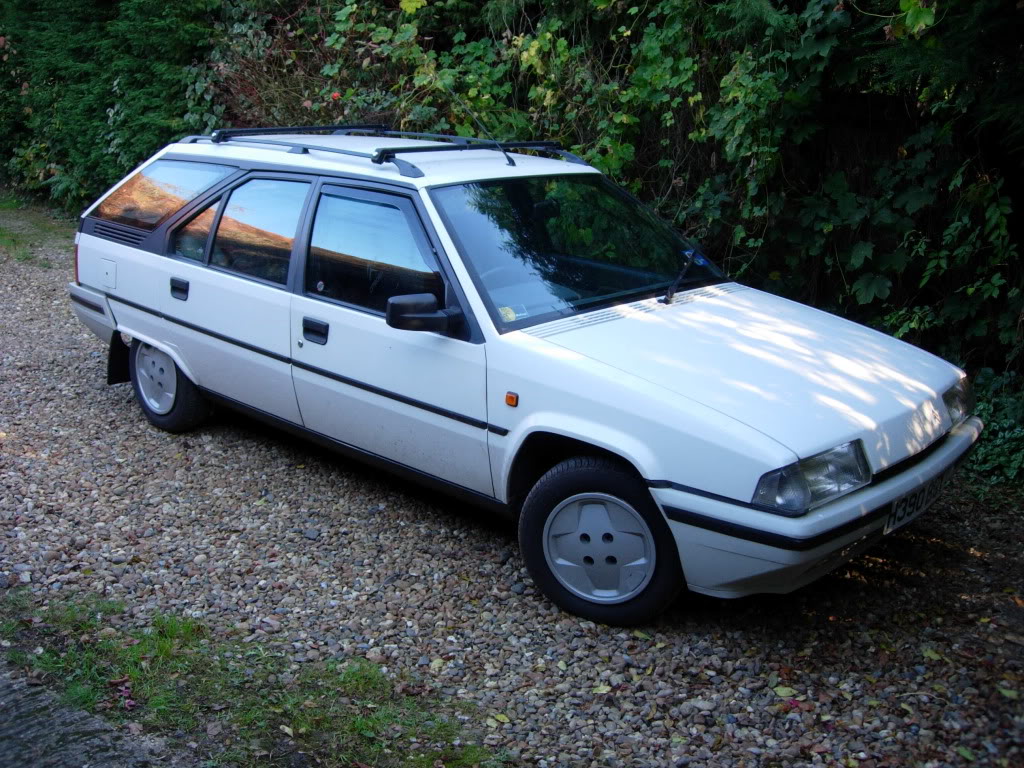 As people have mentioned above, condition is probably more important than a particular model unless you're patient, but with that budget you should be able to get a good un.

What sort of use do you want to give it?

The Diesels are good motors for lots of miles, although the NA models are more cruisers really - they'll get up to a good speed, but just take a while to do it. I've not had a TD, but gather they require a particular driving style due to the typical early TD turbo lag.

As mentioned above the 14's are good motors but not really suited to motorways - they'll cruise all day at 70ish, but will be surprisingly thirsty (low 30's mpg) while they do it. if you want one for local running round on A and B roads though they're ideal, with fuel consumption more like 40mpg, cheap tax and because of the small engine, easy to work on too.

There are probably 3 distinct categories that seem to have a certain following or preference:
Mk 1 or Mk 2
Estate or Hatch
Petrol or Diesel

Obviously there are choices therein. People above have made good observations, particularly your intended use and your fuel preference. £2k will get you a very nice example - possibly too good for every day use if you are inclined to keep things low mileage and original etc.

I'll point out this car on here being sold by an honest gent (well, I'll apply the term gent loosely!

Personally, it would be a TD, although a lovely early 1.9D n/a would do you proud if you're in no great need of the extra oomph provided by the turbo.

Another big factor to consider might be the ride - sportier* BX = firmer suspension - you don't get the "float" in the performance* models that you do in the more sedate petrol or diesel versions.

Caffiend wrote:Another big factor to consider might be the ride - sportier* BX = firmer suspension - you don't get the "float" in the performance* models that you do in the more sedate petrol or diesel versions.

Unless you mess around with different pressure spheres, like I did yesterday. The 16 valve now sports turbo diesel front spheres, at 500 cm3/55 bar and Xantia rears at 500 cm3/ 50 bar. So far I like the results. Still supple, but not too floaty.

As for which BX to get. Tough one. Personally I'd go for a gti 8v auto. Whichever model you end up with, I'm sure you will enjoy it immensely.

Thanks for all the replies, I didn't mention that I had definitely decided on a hatch rather than an estate, because I just prefer the look.
(Sorry, the white estate does look great).
There is a 1.4 for sale i've seen that looks perfect condition wise, but I'm not sure weather I want the extra ooooooomph.
I'm assuming the economy of a turbo diesel will be pretty good compared with the 1.4.
Decisions, decisions.
The grey Athena 1.6 would also interest me.

Cool pogo would have 500 quid left for a set of 17 inch alloys, tinted rear glass and some neons

Save yourself 500 quid Mick and just buy it without the silly xtras!!

I know you want it!!

1.4 petrols are more basic than other models, no power steering, rev counter or sunroof normally. If your going to use it as a daily driver I would maybe stick to a TD, but if you dount do that many miles the 1.9 Petrols are torquey and fun to drive but thirsty in auto form.

I think the general advice is buy on condition.
Lots of Motors, mostly semi broken....
Top

I know I want it Andy, its just my way of persuading myself not to buy it ( rather than just accepting I cant afford it )
1991 BX Meteor 1.6

Any diesel BX will be more economic than a 14, but the TD's in particular fetch a premium - not necessarily above your budget (yet) but you will save more on initial purchase price with a 14 or 19D.

As Tim says, 14 models are generally more basic - about the highest spec 14 you'll find will be the TGE, with electric front windows, central locking, and if you're really lucky the optional (for that model) sunroof. Some don't even have those toys! Earlier 14's have a different engine and gearbox, which while on paper has the same output of the later ones is apparently much less refined. No PAS on a 14 isn't really an issue as the engine is so light, but if you're used to PAS you may want to consider carefully before buying one of the other models without it.
Mike Sims
BX 19RD Estate Mk1 - Timex!
BX 4X4 Estate - Oh god, I've done it again!
BX 17RD MK1 - it called to me!
BX14 TGE, - SOLD
XM Turbo SD,GS Club Estate,Visa 17D Leader,HY Pickup,Dyane Nomad,Dyane 6,2CV AZL,Falcon S,Trabant P50,3x Land Rovers (88" series 1,109" series 2a FFR,series 2a Marshall ambulance),DKW F7, Lambretta LD150 x 1.5,Mobylette SP93,Ural Cossack,Ural M63,CZ 250 Sport,Honda Varadero 125,lots of bicycles & tricycles including (but not only) Sunbeams,Higgins & Bates!
Top

I echo what Mike says, the lack of power steering is (in my opinion) a big turn off, its just something we expect these days......
Lots of Motors, mostly semi broken....
Top
Messages: 53