As per the title, I've had the fuel system apart on my car and it won't start now everything has been re-assembled. Hopefully someone can point me in the right direction or let me know what crucial bit I've overlooked.

Things I've checked so far:
1. I'm getting power to the glow plugs when the ignition is on.

2. I'm getting power to the stop solenoid when the ignition is on.

3. I loosened off the hard lines at the injectors again in case there was air in the lines. How much diesel should I expect to see coming out of the lines if everything is working correctly?

4. I've pumped the Rotodiesel primer button A LOT. I always expect a bit of hard starting for the first time after the diesel filter has been changed but I've tried pumping the primer a lot and the button doesn't seem to go hard like I remember it used to. I seem to get a hissing / whooshing noise both when the button is depressed as well as when it is on the return stroke. After a lot of pumping I also get diesel leaking out past the priming button (see photo below). 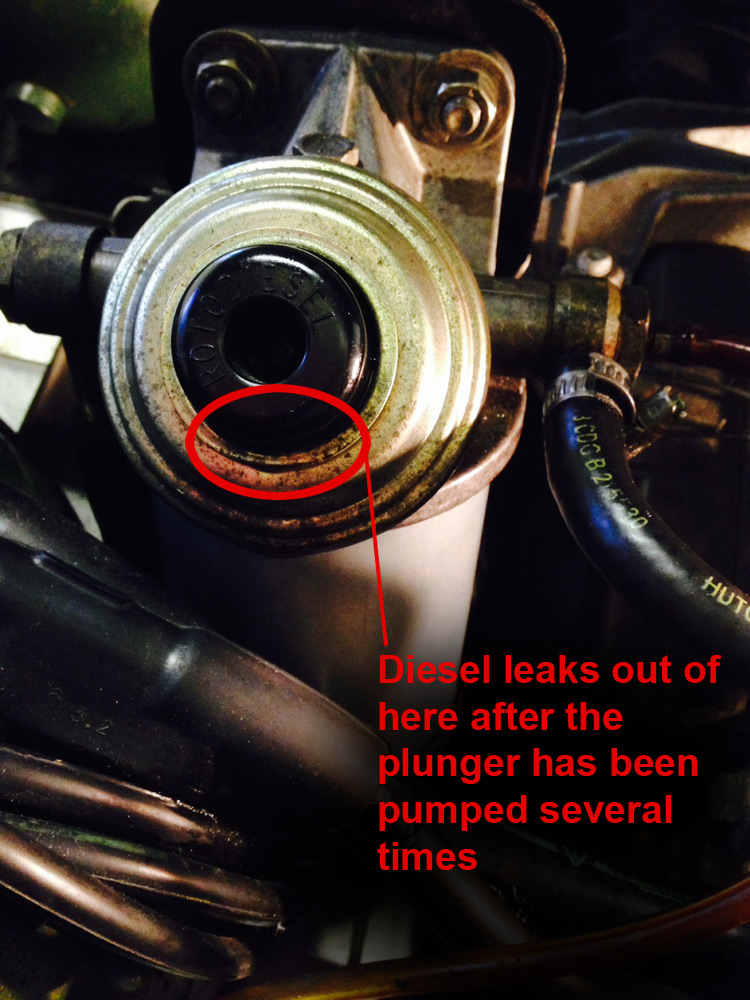 After I've cranked the engine I can also hear a hissing / whooshing noise as if air is being pulled in past the primer button. Does this point to a knackered diaphragm or seal on the fuel primer?

Are there any further tests I can carry out on the stop solenoid?

Any advice or suggestions would be much appreciated.

i think you have answered your own question as it will almost certainly be the leaking primmer causing your uissue,

i can repair these if the innards are the same as the Purflux unit, as i have the relevant genuine Purflux parts,

Did read on here once about someone doing a temporary repair to one of these using a rubber glove, makes sense, just to get an airtight seal.
They think it's all over, it is now!
Top

Both my original Purflux filter head and the Bosch one pictured above have leaked and caused starting and air ingress problems on both our diesels. Using Bio Diesel has speed the process up but the rubber will degrade given the age of the cars now anyway.

I've had good results with using the standard Bosch type screw fitting filter heads available from most diesel suppliers and using a priming bulb in the feed line before the filter:

Many thanks for all the responses.

I had a good chat with Malcolm on Saturday morning (thanks again for your time Malc) and we talked through the various options. I'll have a look into it over the next day or two and report back.

@rutter123 Good idea, I might give that a try in the meantime.

I junked the purflux unit some years back cos it started to leak, now i just use inline filter on the supply and return lines, been like this for years with no probs, just change the filters every year or so, pretty sure i have a good spare here should u need it.
90 BX Tzd turbo 294k SORN undergoing major surgery
90 BX Tzd turbo estate 46k awaiting surgery
65 Peugeot Boxer Van the new workhorse
52 Toyota Rav4 180k Bulletproof Jap reliability
Top

Thanks for everyone's input on this issue, it is much appreciated.

In the end, I opted for a new filter head unit from Delphi. At £30 it was roughly similar to the cost of getting the original filter unit refurbed and it's identical to the original Lucas Rotodiesel that came off the car with the correct 14mm ports for the banjo bolts. This meant I could do a straight swap using the existing bottom plate and long bolt for the filter with no further mods required.

Bleeding the hard lines to the injectors took some doing and in the end the method that seemed to work best was to just loosen off one line at a time and turn the engine over until I got fuel flowing through. I then nipped all the connections back up and it started up like a good 'un.
1992 BX19 TGD (aka Maurice), N/A diesel, silver with Zenith trim.

Now I can get back to troubleshooting my original issue

Now I can get back to troubleshooting my original issue