I'm looking for a replacement breather hose for my Series 2 19TRS - but am not sure of the correct part number. I just want to keep an eye out incase one crops up on Ebay or elsewhere...

The hose I'm after runs from the oil filler cap (larger diam. fitting) to the rectangular air filter box. Service Citroen shows a hose 1180.35 for this location on the filler cap (orange hose in picutre below) but I think I have 1180.35 and it is far too short. SC also shows an alternative for the BX16 - 96.050.020 Could this be the one I'm after? I've attached a photo of the hose I want a replacement for - and the shorter 1180.35.

I dont think either of these are available from Citroen. Any advice on the correct part number welcome.

Looking for hose in orange location 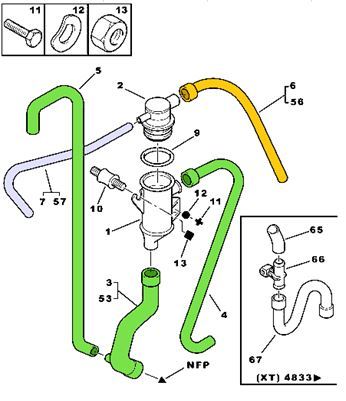 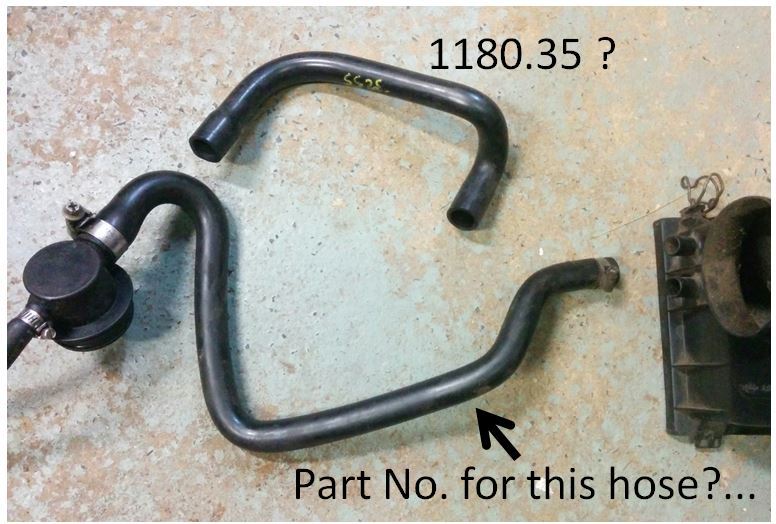 It's a bit naughty, but older vehicles used to vent the crankcase to atmosphere. Worth doing with the older 150C engines when they get over 100k....

The purpose of that hose is recirculate a bit of oil mist, internal gases etc to lower emissions. For actually running the engine it is completely superfluous. I used to mask the fact that I'd not routed the hose end into the air box on the 14 at MOT time. It is sometime late 70s'/erly 80s' when it became standard regulation to route these gases back into the inlet to reburn, at least in Europe.

Therefore you have another choice, just run a stock sized pipe down and out to atmosphere.....

Of course I am not conversant with Aussie MOT regs, and you may need a sympathetic tester!.
Top

Or run the breather hose into a proper oil catch tank.... I've just ordered one of these for the TZD as it tends to breathe a fair bit of oil mist back into the system and I think it'll help keep the air filter and intercooler (as well as the bleed-off to the boost control valve on the injection pump) a bit cleaner.

Thanks for the suggestions. I will probably see if I can get one made up from two or more others, but maybe look into a catch can for my Mk1 16TRS which has been venting some oil into the air filter housing of late.

No MOT here in Melbourne (Victoria) where I live - an equivalent "Roadworthy" is only needed when the car is sold on. So you can run the same car for as long as you want with no engineering test (different in some other states in Australia I think). Maybe that's why you see so many cars with one headlight out here...
Mark T.
Melbourne, Australia
BX16 TRS Auto (Series 1)
BX19 TRS (Series 2)
C3 Pluriel
Top

Worth cleaning the two gauze filters in the oil filler pipe tube and capping first on the 16TRS. I have the same engine type and NO lower filter as the tube got replaced, but not the internal gauze. These simply get clogged with 'mayonnaise' over time especially in winter conditions and make the crankcase breathing even worse!. I tend to clean mine at least once a year. The top internal cap one can be prized out with a screwdriver, then find the pin holding it together, remove and unroll, then wash in petrol.

Only other thing is older high mile engines do tend to get a bit more crankcase pressure from losing piston ring compression, but these engines can do 200 - 250k miles even if the head may need a refurb and light valve lap.

My old 14 got so bad it was throwing the mayonnaise into the filter and inlet tract resulting in gobs blocking the main jet whilst doing 70 mph...

The 16 has a better air filter and induction system, but worth trying to get more life from the filter, and not letting one corner clog with oil.
Top
Messages: 6 • Page 1 of 1