A fair while ago, I recovered a BX meteor belonging to Mark (mnde) which had a blown head gasket, and had suffered after 2 years of storage. It wasn't worth putting back on the road, and so it was broken for spares.

What it was worth doing though, was picking all the best bits from it to go on Mark's current meteor. Sunday afternoon, and it looks like this: 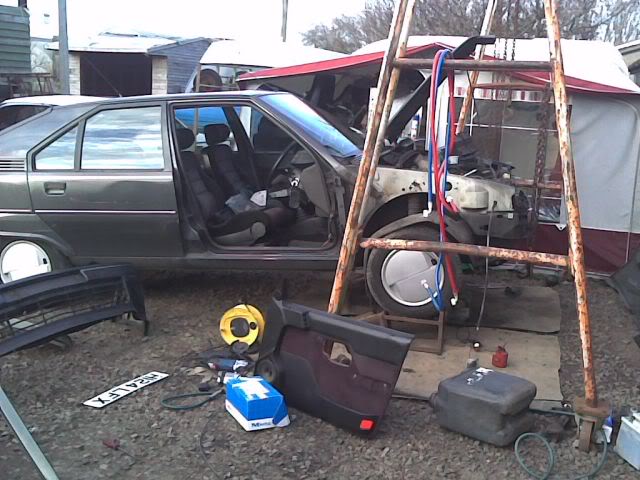 We start changing doors, front wings and bumpers, but then found this: 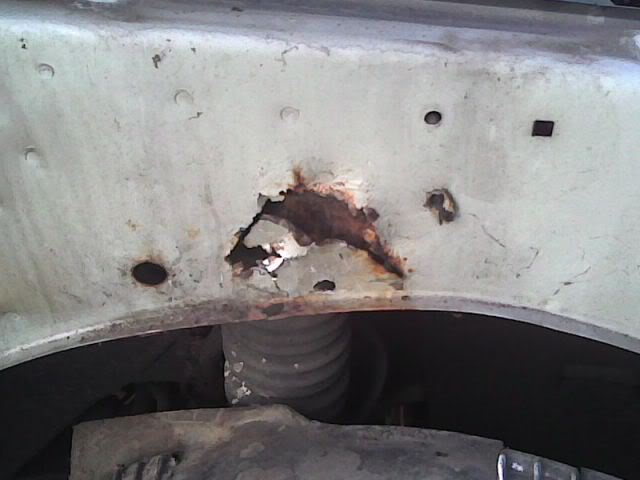 Which was a bit of a pain, as there was already the standard inner wing corrosion to sort. Hmm.. lets have a look and see if there's any more. Guess what, there was this, under the N/S screenwash tank. 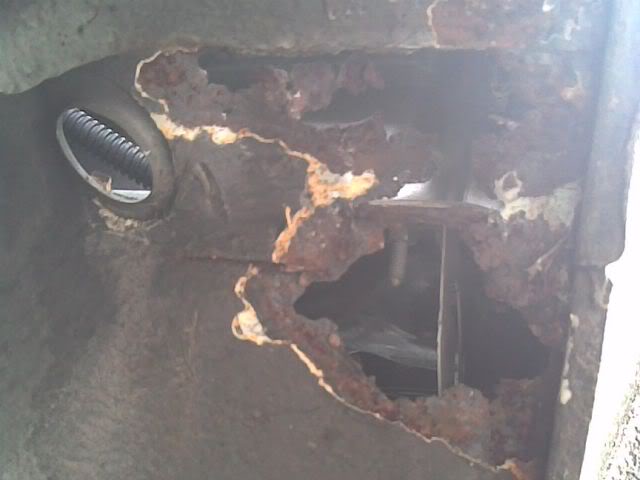 and yes, that goes through to the car interior. Bummer. Hmm.. what about the other screenwash reservoir? 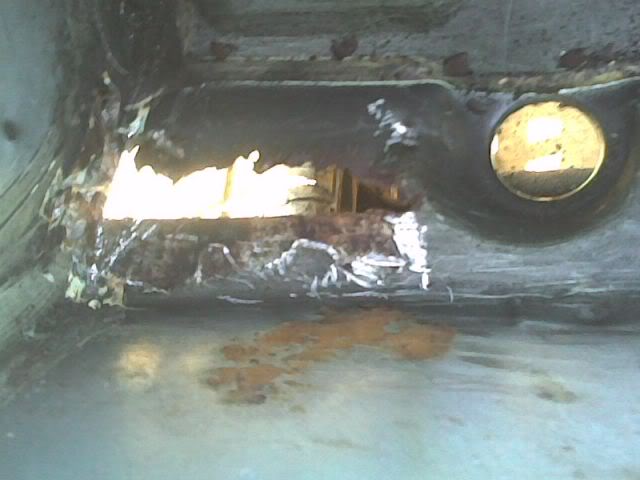 Surprise surprise. Right then, that's 4 areas of corrosion to sort.

Thankfully, I'd kept various other bits of the other meteor, one of which was the roof, so the metal I welded in was genuine BX meteor metal! 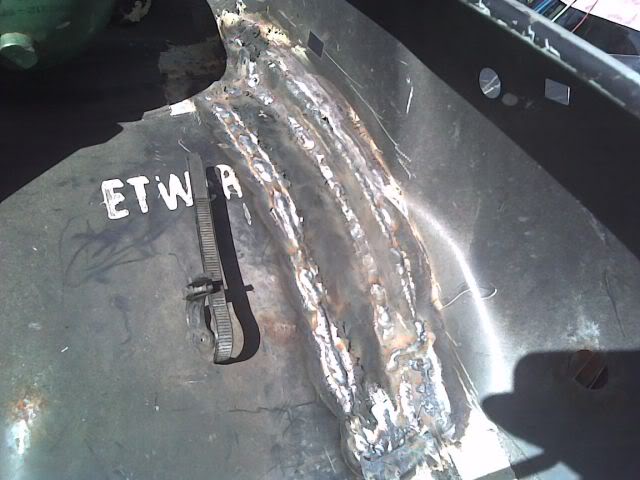 Other inner wing welded and painted with black bitumastic paint: 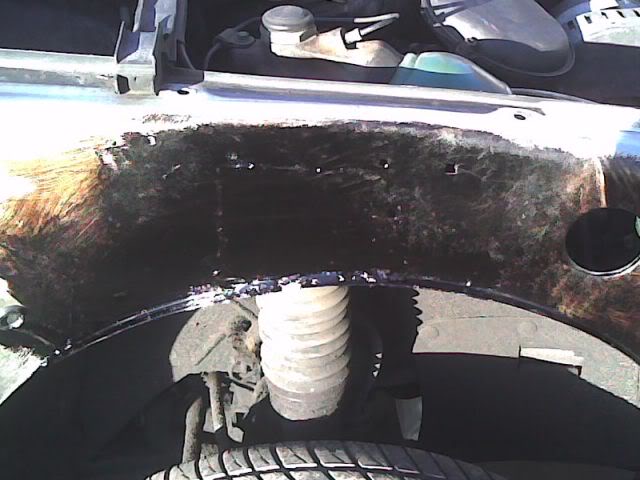 Scuttle welded and painted too: 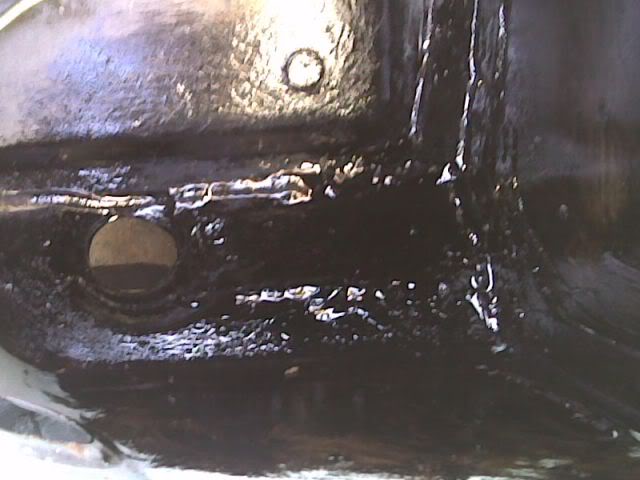 Along with the welding, we changed 3 of the 4 doors, the wings, bumpers and did an oil and filter change. Still some issues with the front suspension to sort, but at least the shell is now fairly solid.

The paint looks messy, but with a Zinc based undercoat and a bitumen based topcoat it should outlast the rest of the car.
this might be a signature
Top

Well done David, looks like its rusted in the same places as the 16v did, keep up the good work!
Top

Repaired mine in much the same area when i can get the photo's off my phone i will post them.

A few more while I remember:

Outside of inner wing: 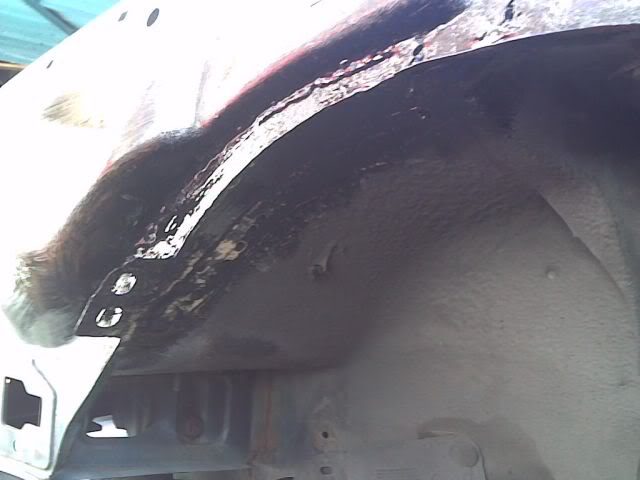 Forming the lip that the wing liner clips onto was a little interesting, but a grinder and a hammer are surprisingly effective.

Inside after painting. Had to be careful not to cover up the paint code. Twas close. 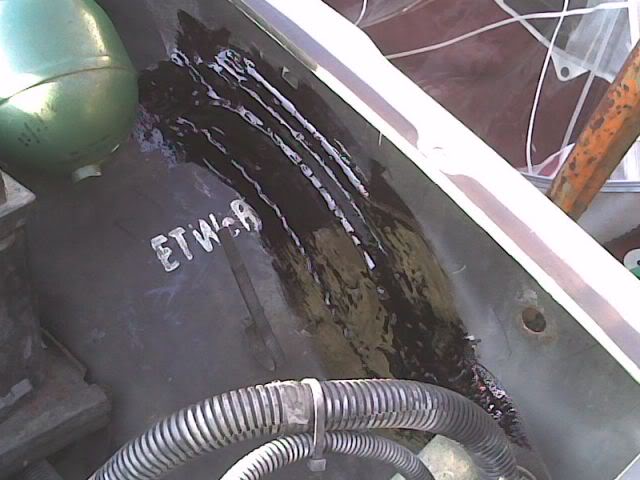 and the wheelarch where it had corroded through to the interior: 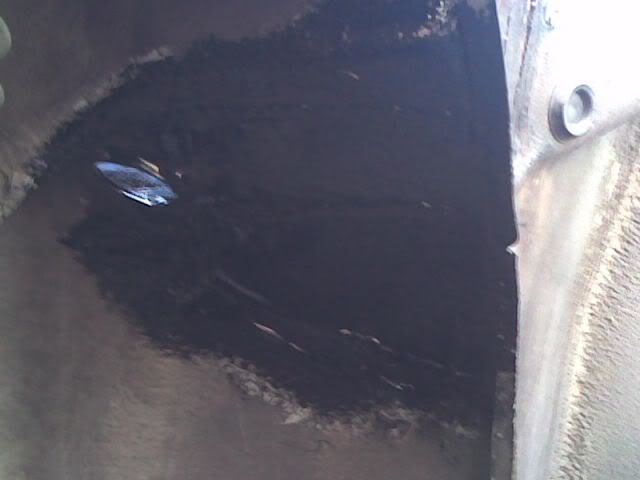 That was the welding, but the interior had come out too. It always amazes me how big the interior of any car is when it's got no seats in it: 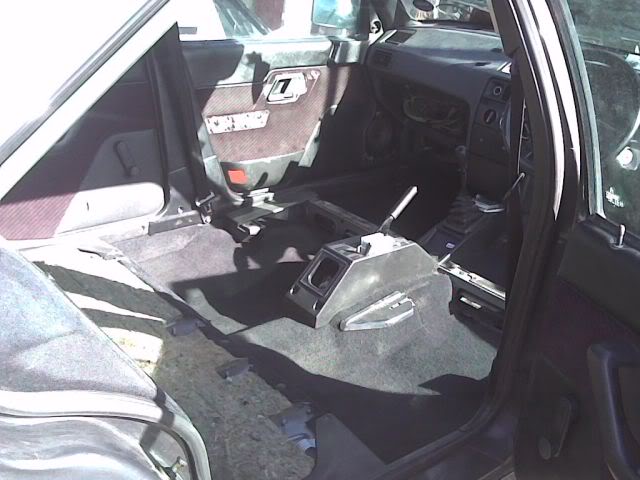 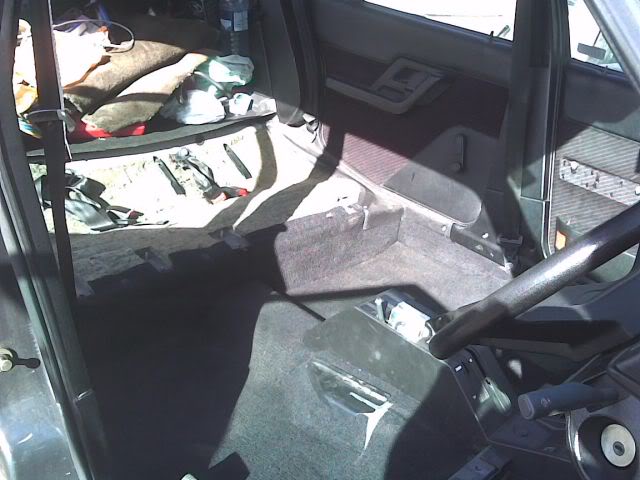 That's where the interior which is currently in "for sale and wanted" came from.
this might be a signature
Top

This is literally the first time I've logged in since 2 weekends ago, because my laptop currently has issues and I started a new job last Wednesday.

David, you must have got busy with the camera while I wasn't looking... I only saw you take one of me in those overalls fiddling with pieces of interior. Nice work!

Here's a big public thankyou for all the welding work and countless other bits and bobs you did during my stay, aided and abetted by myself (not the welding! - I did things like the interior swap, oil change, bumpers and fitting up the doors).

For those who don't know, I stayed at Davids for 2 1/2 days (2-4 March) and goodness me, especially on Tuesday afternoon (!), we worked like the wind!! On Monday we endured artic weather - a couple of hailstorms and a high of 3-4 degrees C which wasn't nice for working in, but we got nice sunshine on Sunday and Tuesday.

Thankyou also for your excellent hospitality (including a proper nice fish n chip supper on Monday night - home cooked because all the local chippies were shut!!!) and general good humour, advice and conversation.

I look forward to another trip over at some point soon

David is most excellent host.
He cooked me a very unique vegetarian pasta dish last time I visited, at a fairly unspeakable hour.

What I forgot to say was that the brand new (extra large) accumulator sphere David also fitted for me has worked WONDERS with the car. The old one really was as flat as a pancake.

To those people who, when I changed the accy sphere on my GSA a few years back, doubted my assertion that it affected the handling and ride comfort I say again: b*ll*cks!

Not only do I now have a stellar tick time, it also passes the "engine off-sit in the boot-rise up" test AND where before the back end sank onto the deck within, say, half an hour, there's now still pressure in there after being parked overnight! Also damping is much improved, especially at the rear (no more see-saw sailing boat effect), and thus, even though there are still issues with wishbone wear, it handles far better.

And after the oil and filter change the engine is a bit quieter and smoother as well. Still need to get a moment to swap the distributor (to add another piece of the old Meteor!) to see if I can cure the pinking problem caused, David reckons, by sticking advance weights. And if fuel wasn't so bloody heavily taxed I could afford 97/98 octane which would no doubt improve things further

(note: courtesy of my Gunson timing light, the timing is set to "8 degrees" already)

Anyway. One happy Meteor which looks better on the outside and the inside (thanks to the other car), and is whole again (with pieces of the dead car's roof welded into it!)

mnde wrote: And if fuel wasn't so bloody heavily taxed I could afford 97/98 octane which would no doubt improve things further

It'll be even worse after tomorrow when Alastair "rent boy" Darling screws us over yet again, despite failing dismally to provide any usable alternative.