Anything about BXs
Messages: 18

Yet another query regarding alloys! These lovelies are available on Ebay here. All the measurements seem correct for my 16v. If anyone ever wondered what 'ET' meant regarding offset - it isn't that thing that used to want to 'Phone Home' but it's from the German word Einpresstiefe ( meaning insertion depth). Anyway, the one thing I'm not sure of is the wheelbore - whether these will fit on the BXs hubs. Anyone know? Wheelbores unite!

Being Peugeot, they might. But also being Peugeot: don't. Style conflict time

It says they're from a 306. Not your style eh Phil? I was looking at the more classic 205 alloys but they look too big in my opinion. The proper 16v alloys that I've got have got winter tyres on them, yes I could just fit some summer tyres to them but I like to see air through my wheels in the summer!

Only my opinion, Todd. Actually I quite like different alloys on a BX, all I would try to do is find some with a design what has a 'squarer' feel, more angular - something that harmonises with the body design. Also the view through 'open' wheels on a BX isn't particularly flattering: no red Brembo calipers and chunky springs or nice shiny grooved discs!

Thanks for that Billy!

Phil, I was looking for something 'squarer' too - there were actually some aftermarket alloys made by RW for Citroen ( who also made the white Swifts that go on my estate) for the 16v but they are rare. I've seen one set for sale in two years and at that time I didn't have any need for them : very angular looking.
I like the twist in these 306 wheels - never seen it before. But, at this stage I'm not committed to anything apart from opening a

in a few moments..
Todd

I found some which were part graphite with polished rim edges, so in someway echoed the graphite speedlines you see. 15" ones they were...

Let me have a look around and see if i can find the reference. They were well cool!

thjose pug rims will bolt straight on with out any issue! although you may look a little odd as the Pug symbol is part of the alloy!!

basically any 4 stud, citroen, Peugeot and ford alloy will fit the bx,
for the ford alloys you Will need spacers as they run an offsett of around the 35 mark, (adding a spacer reduces the offset number by the amount of the spacer so an et35 with a 20mm spacer will result in a et15 fitment!) the central bore is slightly smaller on the ford rims but due to the need for spacers it sint an issue and you can easily get hold of ford to cit/p[ug fit hubcentric spacers!
thanks to the land of all things Saxo and 106 topper chaving there are Masses of wheels in the correcrt fotment about!

Thats what i was thinking Marty, sand them off & then stick on some nice citroen caps.
Top

205GTi 1.9 wheels are quite nice too. Least I think they are!
Vauxhall apologist.
Top

Just as I mention those 'Swifts' - some turn up on Ebay here. Not a matched set - two silver and two black (he says they are his leftovers). Nice presentation on that flowery curtain.
The seller reckons it's possible to get 195s on them - though I've only got 165s on my white ones. Fitted as standard to some special BX models, only in Germany.

You could get the lot refurbished to match (but it costs between £35 and £40 per wheel here to get that done), and probably happily stick 185's on those...

I re-sprayed my white ones myself, so I wouldn't be worried about taking these on ( though the prep was horrible). Problem is that he's only got one out of four covers ( which he says he made himself, and can be used as a pattern!) and heaven knows where you'd find those. RW of Ghent who made them, went bust in the early 90s. Here's one of mine, freshly painted before The National last year 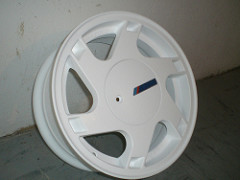 I imagine if you've got one cover, then you might be able to find a fabricator who'd be able to produce copies?
• 1992 Citroen BX TZD Turbo Hurricane
• 2006 Xsara Picasso 1.6 16v
Top

Philip chidlow wrote:I imagine if you've got one cover, then you might be able to find a fabricator who'd be able to produce copies?

Was going to suggest that. Perhaps a friendly local engineering firm could knock some up for you? If so may be worth getting a couple of spares or even another set. Lovely looking wheels and whilst I agree the black ones look better the white ones look fantastic.
Vauxhall apologist.
Top
Messages: 18