Anything about BXs
Messages: 36

In mulling over the Gumball 3000 charity event, I have looked at the logistics and costs - not to mention the character of the event and decided to investigate doing my own thing for charity.

As some know, I like France and lived there for a while. I did, years ago, wonder what it would be like to drive around 'the Hexagon': That is, it is acknowledged (in France anyway!) France is roughly hexagonal, with three sides on the coast and three sides running along (largely) mountains.

I have looked at a possible route. It is between 2,230 and 2,300 miles in length with the principle way points being: (It doesn't mean driving through the center of all these places, but you get the idea):

I appreciate that Brittany is 'left out', but we could include it I guess (does rather spoil the Hexagon shape though... )

So it could be done safely in a week. In my BX (whichever one I have at the time!).

The idea would be to finance the trip myself/ourselves (BX crew), allowing £500 for fuel and other car-related stuff, £50 for tolls (although we would avoid doing all of this on boring - but fast - payage roads) and £300+ per head for stop-overs/grub. The crossing would be paid for by Tesco vouchers

I would aim to collect sponsorship to the tune of £2,000 or (much) more (otherwise it's not worth doing) to put to a suitable charity (TBA).

Anyone interested in becoming a member of the crew? Or indeed joining the trip in another BX?!

2010, spring. After the snows have gone from the Pyrenees... and before it gets too hot.

What to call it? Hex and BX etc. offer possibilities.

I certainly like the idea. Finances permitting, that looks like a cracking good fun holiday. If I could afford to, I'd stretch it to two weeks in order to get some holiday time as well as driving time. Colour me "interested."

Very cheap hotels can be found in France, as can decent, cheap food.

Did you have a charity in mind? I usually favour Womens' Aid and the British Heart Foundation.
Top

Ideally I want a charity that is known in France too. Something global/pan-European. That way we can 'collect' en route too...
• 1992 Citroen BX TZD Turbo Hurricane
• 2006 Xsara Picasso 1.6 16v
Top

Brilliant idea and something I'd love to do

The only minor issue is me and a BX - I've not got one. Could I perhaps join in with my Xantia Estate? It'll carry a lot of BX spares!

If we stop in Mulhouse we can pay homage to the Peuget 205GTi. They were made there.

Another issue is a passport. I've not got one at the moment. It expired two years ago

Philip Chidlow wrote:Ideally I want a charity that is known in France too. Something global/pan-European. That way we can 'collect' en route too...

Mulhouse is certainly a good idea - I'm aware of the museum there but I've never been. I'd also like a side jaunt to Nancy, as I've got friends there, which would mean we're not far from Reims and the old racing circuit there (and champagne!)
Top

I think a two-car convoy with a two-man crew in each is a good idea, but more BX's could join for pre-arranged stages possibly?

As for Passports, there's plenty of time to sort that out!

What about Médecins Sans Frontières?

I very much like the idea. If the 16v is finished by then - and it should be done by next spring - I would like to join.
Good heavens! My signature's been moderated...
Top

Two routes shown, the red one is my initial one and the blue one is more faithful to the hexagon shape, taking in Brittany this time and taking a trek up into the Pyrenees. A few more miles and not do-able in a week IMO. But who said it had to be a week. 10-days is fine I guess! 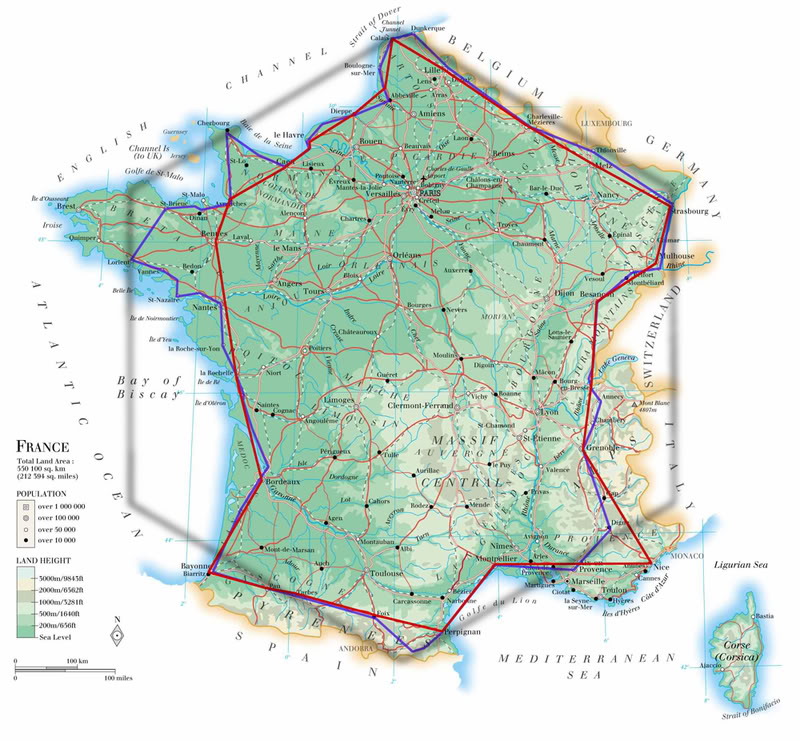 I am really interested in this, in fact even more so than the Scumball 3000 idea. More time to get cash together, plus the fact that I've already met at least some of the participants (albeit briefly). I would be more keen on the idea of several cars going as by then I would hope to have mine ready(!) Also there is more flexibility if and when people drop out, as they are bound to do. A definate yes!

We need to have a system in place for co-ordinating sponsorship. I will put some thoughts together.
• 1992 Citroen BX TZD Turbo Hurricane
• 2006 Xsara Picasso 1.6 16v
Top

Phil, can I suggest http://www.justgiving.com as one possible way to raise sponsership - it means that anyone who has a credit/debit card can donate and saves quite a bit of hassle collecting money etc.

In addition I will contact some larger potential sponsors - the most obvious being Citroen, Total, Michelin but, considering they are likely to be difficult to persuade, there are some potential sponsors e.g those associated with England/France such as Living France Magazine, Eurotunnel, The AA etc...

When I have time (after 15th September) I will prepare a better thought-out plan, with timetable, costs and sponsorship requirements.

But I am getting excited about the potential for this plan